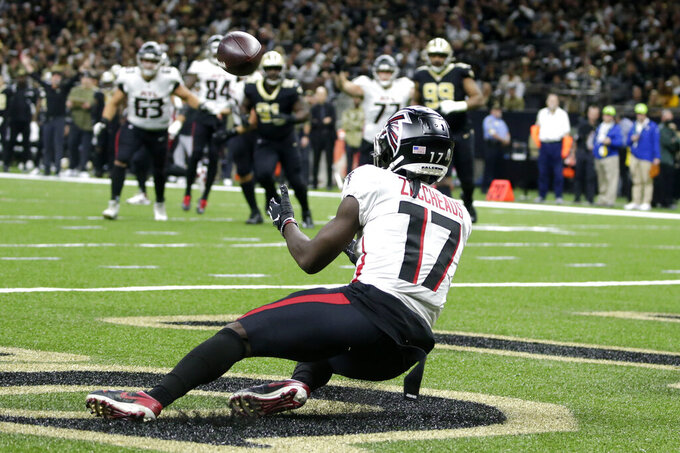 ARLINGTON, Texas (AP) — Dallas defensive coordinator Dan Quinn dodged questions about facing the Atlanta Falcons for the first time since getting fired as their coach last year by stating the obvious several times.

The Cowboys have to focus on fixing some things after their worst showing of the season.

Defense wasn't the only problem in a puzzling 30-16 loss to Denver that ended a six-game winning streak. Dak Prescott's passing stats were shockingly bad through three quarters before two late touchdowns made a 30-0 score look better.

“This whole league’s about responding, whether it’s in-game, the next game, the next series,” Dallas coach Mike McCarthy said. “You have to respond, and the most important thing is just keep it about yourself. Everything we did not do to our standard are things that we had done in the prior six games.”

For Quinn's unit, stopping the run was the biggest problem in the first loss for the Cowboys (6-2) since the opener.

The Broncos rushed for 190 yards — almost 90 better than their season average, fueled largely by big plays. Quinn wanted to talk about a season-high 14 missed tackles, not Sunday's visit by the Falcons (4-4).

“I have great memories for there and I always will and I think a lot of the really cool things that we accomplished there — and there were a lot of them — versus how it ended,” said Quinn, who was fired after an 0-5 start last year.

He was four years removed from taking Atlanta to its second Super Bowl, the infamous 34-28 overtime loss to New England when the Falcons led 28-3 in the second half.

“But you guys saw the performance, so there is no time to take a stroll down memory lane,” Quinn said. “We got some (stuff) to fix.”

The Falcons have fixed their stuff in recent weeks, reversing a 1-3 start with three victories in four games, capped by a 27-25 win over New Orleans that pulled Atlanta even with last season's win total.

“If you got the ‘woe is me' mindset, this probably isn’t the business for you,” said Atlanta coach Arthur Smith, Quinn's replacement. “I don’t live week to week and die with the daily narratives. So, here we are 4-4. It’s what we are, what we deserve to be.”

“I mean, listen, I love Dan,” Ryan said. “He’s an awesome person. He’s a great coach. I really enjoyed playing for him. Wish him nothing the best, but he knows what this week is about for both of us. It’s about trying to get a win. He’s an incredible competitor. So, once we’re playing, it’s about going against their defense and I’m sure ‘Q’ will be locked in the same way.”

Two defensive players signed as free agents with the Cowboys after playing for Quinn in Atlanta in recent years: safeties Damontae Kazee and Keanu Neal, who converted to linebacker in Dallas.

“They are the next team on our schedule,” Kazee said. “That is how I am treating it.”

The Falcons appear content with their current wide receivers, even with No. 1 target Calvin Ridley out indefinitely as he addresses his mental health.

Tajae Sharpe had five receptions as the fill-in starter in a 19-13 loss to Carolina on Oct. 31. Russell Gage had a team-leading seven catches and Olamide Zaccheaus had his first career two-touchdown game against the Saints.

“Pretty happy with the guys we have,” Smith said. “Any chance we have at any position, we’re always looking to improve.”

Dallas defensive end Randy Gregory is out multiple weeks after straining a calf in practice. He's the third Cowboy to miss time with that injury. Prescott was out one game. Receiver Michael Gallup is expected to return against the Falcons after missing seven games.

The loss of Gregory means the Cowboys are without their top two pass rushers. DeMarcus Lawrence broke a foot in practice the week after the opener. The pair might end up returning about the same time, probably in December.

Dorance Armstrong, who missed four games with an ankle injury, could start in Gregory's place in his third game back. Rookie linebacker Micah Parsons will line up as a rush end, though probably not as much as Week 2 when Gregory and Lawrence were out. Gregory missed that game against the Los Angeles Chargers after testing positive for COVID-19.

Ryan had five carries for 8 yards, including a 1-yard scoring run, against the Saints. The 36-year-old had a quick response when asked if he feels faster.

“Nope,” said Ryan, who threw for 343 yards and two touchdowns.

Ryan says he’s always been more mobile than some believe when the situation calls for him to run.

“I kind of feel like I’ve done this throughout my entire career and some weeks you know probably happens more often, but I really think I played the same way for a long time,” Ryan said.