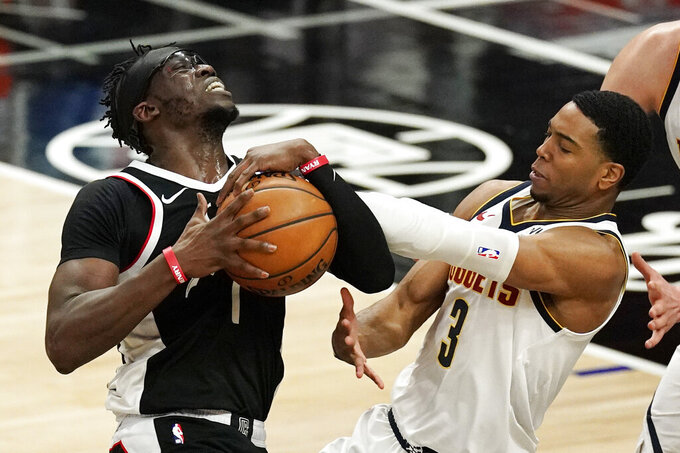 LOS ANGELES (AP) — Nikola Jokic had 30 points and 14 rebounds, Michael Porter Jr. scored 25 points and the Denver Nuggets moved past the Los Angeles Clippers for the third seed in the Western Conference with a 110-104 victory Saturday night.

Denver, which is a half-game in front of Los Angeles at 43-21, has won five straight and is 9-1 since Jamal Murray went down with a torn ACL in his left knee on April 12. Murray, who is rehabbing in LA, was at the game.

PJ Dozier's pullup jumper gave the Nuggets a 101-91 lead with 3:32 remaining before the Clippers scored seven straight points to make it a one-possession game. After a Denver timeout, DeMarcus Cousins was called for a foul as Jokic was attempting a 3-pointer. Jokic made all three free throws to give the Nuggets breathing room.

Facundo Campazzo then added a 3-pointer from the corner to make it 107-98 with 1:08 remaining.

Paul George led the Clippers with 20 points and Rajon Rondo added 18. Kawhi Leonard returned to the lineup after missing nine of the past 10 games due to right foot soreness and had 16 points.

Cousins also scored 16 for LA (43-22), which has dropped its last three and had a seven-game home winning streak snapped.

Los Angeles trailed 52-47 at halftime but Reggie Jackson's step-back 3-pointer completed a 10-4 run to put the Clippers back on top. On the ensuing trip down the floor, LA lost momentum when George received a flagrant 1 foul with 8:54 remaining in the third quarter for a shoulder block and push to Campazzo.

The Nuggets took control after that with a pair of free throws by Campazzo and seven straight points by Jokic to go up 65-57 midway through the quarter. Denver would lead by as many as 11 in the period and went into the fourth up 83-73,

The Clippers started off strong, making their first seven shots from the field to take an 18-7 lead. But Los Angeles' hot shooting didn't continue as it went 10 of 36 the remainder of the first half.

Denver narrowed the margin to one 28-27 at the end of the first quarter and then took its first lead with 10:37 remaining in the second quarter on JaMychal Green's 3-pointer. The game was tied at 36-all before the Nuggets scored eight straight points for their largest lead of the first half.

Nuggets: Dozier added 16 points. ... F Zeke Nnaji was out due to a left ankle sprain.

Nuggets: Remain in Los Angeles to face the Lakers on Monday.