Despite title game, USFL already focusing on next season 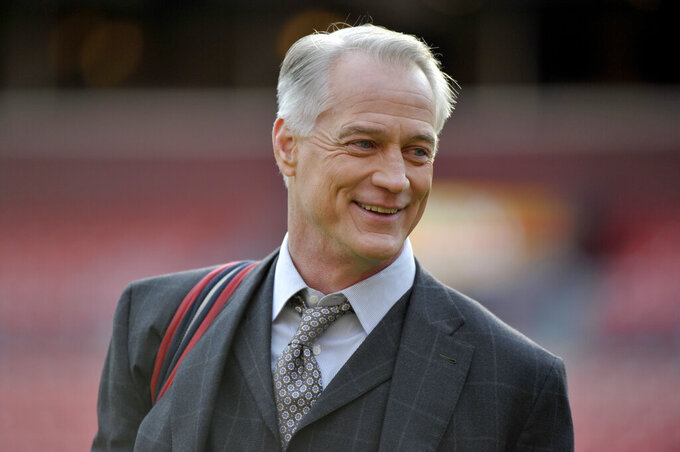 FILE - Former Dallas Cowboys standout and longtime NFL on FOX game analyst Daryl Johnston stands on the field prior to an NFL football game between the Philadelphia Eagles and Washington Redskins, on Dec. 30, 2018, in Landover, Md. Johnson is executive vice president of football operations of the USFL. As the league prepares for Sunday night’s championship game between the Birmingham Stallions and Philadelphia Stars at the Pro Football Hall of Fame in Canton, Ohio, where it goes from here is the bigger question.(AP Photo/Mark Tenally, File)

The USFL accomplished what the last two attempts at spring football failed to do — make it through its first season.

As the league prepares for Sunday night’s championship game between the Birmingham Stallions and Philadelphia Stars at the Pro Football Hall of Fame in Canton, Ohio, where it goes from here is the bigger question.

Fox Sports president Eric Shanks announced earlier this week that the USFL will return next season. Ratings have been steady, with games averaging 1.034 million viewers on Fox and NBC. The overall average is lower (715,000) when games on USA Network and FS1 are included.

While those ratings are slightly above the 2019 Alliance of American Football, which ceased operations after eight weeks, they are behind the 2020 XFL viewership average of 1.9 million. The XFL ceased operations midway through its season, mostly due to the coronavirus pandemic.

“I think we’ve said pretty consistently that the number one goal for this season was to establish that we could do viewership at the same level as other sports that have been part of the spring calendar for a long time (Formula 1, Major League Soccer, English Premier League). I think we’ve more than held our own,” Fox Sports executive vice president Michael Mulvihill said.

The league took a huge step toward ensuring financial stability by playing all of its regular-season games in Birmingham, Alabama. League officials announced 17,500 fans took in the first game on April 16 between the Stallions and New Jersey Generals but did not release figures for the other 39 games, which appeared to be played in a mostly-empty stadium.

The plans for next year include the same eight teams, but they will play games in at least two cities or as many as four.

The league was able to adjust to concerns throughout the season. The sensor inside the football for tracking was altered after feedback from quarterbacks and kickers about it how it was affecting them. The league also expanded rosters due to injury concerns late in the year.

“This league was put together by people that understand what an alternative football league is about," Philadelphia coach Bart Andrus said. “People may have experienced the other part of it, losing the league or not having one make it. But they understand what it takes. I think that’s been the difference.”

“We will always consider ourselves as a standalone professional football league that hopefully continues to build that relationship with the NFL,” Johnston said. “There are some things that we’re talking about internally that hopefully will come to fruition. We want to create that synergy with them, where it’s a relationship that benefits both sides.”

USFL games averaged 2 hours, 58 minutes, which is 14 minutes faster than an NFL game. While league officials were happy with the game pace, they would like to see more plays and more attempts at 2- and 3-point conversions.

The USFL averaged 158 plays per game — 20 fewer than the NFL. Even though teams could attempt a 3-point conversion from the 10-yard line after touchdowns, it only happened five times during the regular season with one successful conversion.

The USFL has a working relationship with the NFL but doesn’t want to be seen as its developmental league. But it is also not a challenge to the NFL, which puts it in a strange middle ground.

The 2023 season is expected to start in mid April so that the USFL doesn’t have to compete against the NCAA basketball tournament and the Masters. The XFL plans a return next season with an expected start of February 18, the week after the Super Bowl.

Philadelphia is led by receiver/returner Maurice Alexander, who led the league in kick returns. Meanwhile, Birmingham linebacker DeMarquis Gates had 10 tackles for loss and 5 1/2 sacks. The Stallions won the first meeting 30-17 on May 15.

Johnston also wants to make sure that everyone takes a moment to celebrate getting to the end of the season once the trophy is raised.

“I’ve talked to everybody about this," he said. "Let’s make sure we take the time to celebrate what we’ve accomplished and pat each other on the back because it’s been a lot of hard work by a lot of really, really good people that’s gotten us to this point.”