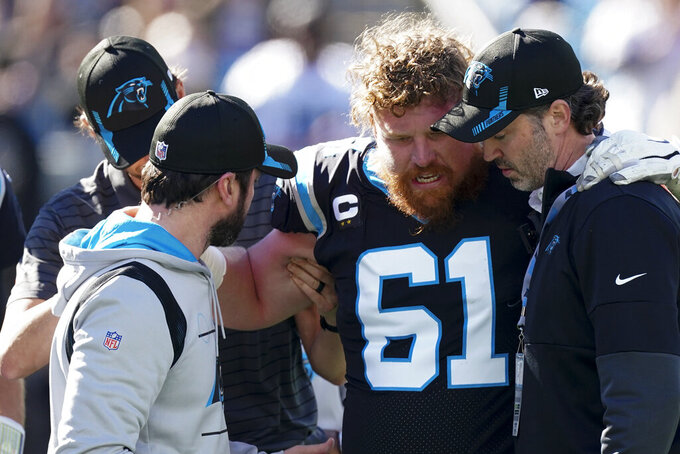 Carolina Panthers center Matt Paradis is helped off the field during the first half of an NFL football game against the New England Patriots Sunday, Nov. 7, 2021, in Charlotte, N.C. (AP Photo/John Bazemore)

CHARLOTTE, N.C. (AP) — It’s one thing to be a struggling football team.

It’s another to be a struggling football team seemingly without a direction and any tangible solutions to fix recurring problems.

The Carolina Panthers look like the latter under second-year coach Matt Rhule as they head into the second half of the 2021 season.

It's abundantly clear that Sam Darnold isn’t the long-term answer at quarterback and backup P.J. Walker doesn’t inspire much faith either at the NFL’s most important position. The offensive line remains one of the worst in the league — and that was before losing center Matt Paradis to a season-ending injury on Sunday.

Frustrations are boiling over with wide receiver Robby Anderson throwing a fit on the sideline for the second time in less than a month, shouting at Darnold and later saying that the Panthers doing the same thing over and over again on offense and hoping for different results “is technically insanity.”

The offense's ineptitude and inability to pick up first downs, let alone score touchdowns — Carolina has one TD in its past 36 possessions — is sucking the life out of a young, but talented defense which is having to spend extra time on the field.

Case in point, the defense had two takeaways against the Patriots in the first half on Sunday, giving the offense the ball at the New England 31 and 21 and plenty of momentum. But Darnold and company could only muster a pair of field goals and never scored again in a lopsided 24-6 loss.

Carolina (4-5) is only a half-game behind the Atlanta Falcons in the race for the NFC's third wild-card spot, so technically they are very much in the playoff hunt. But after losing five of their past six games and with such unsteady play at the quarterback position and on the offensive line it's hard to imagine the Panthers making a run, even with 2019 All-Pro running back Christian McCaffrey returning from a hamstring injury.

Meanwhile, Darnold's status moving forward remains unclear after he had an MRI on his throwing shoulder on Monday.

“Everyone in this building just needs to take a breath, regroup and just play the second half of this season,” Rhule said. “We have to be more consistent. We have looked good at times, we have looked bad at times. Obviously when the quarterback plays well, you're going to play well as a team. So we have to help whoever the quarterback is."

The Panthers deserve some credit for buying low on outside linebacker Haason Reddick, who was coming off a 12 1/2-sack season last year with the Arizona Cardinals. Reddick has been the defense's most consistent player with 8 1/2 sacks through nine games — not bad production from a guy on a one-year, $6 million contract. Conventional wisdom suggests the Panthers won't get off the hook that cheaply if they plan to re-sign Reddick to a multi-year contract extension.

The Panthers continue to be an undisciplined team, committing 65 penalties this season — tied for most in the league with the Houston Texans.

“One thing our guys have to learn, when you have a reputation for getting penalties, you are going to get a lot of penalties thrown, even when they are tight,” Rhule said after the Panthers were penalized 10 times against the Patriots.

Zane Gonzalez has quietly solidified the team's kicking position, one that was in disarray after the team cut Joey Slye in the preseason. Gonzalez has made 12 straight field goals and is 15 of 17 overall on the season, including a career-long 57-yarder two weeks ago.

The Panthers' decision to pick up the $19 million guaranteed option for Darnold next season — before he ever played a game for Carolina — now seems like a complete head-scratcher. Darnold's deal is quickly becoming an financial albatross. He's regressed to his playing level with the New York Jets, throwing 10 interceptions over the past six games.

His record as an NFL starter is 17-30 and his career touchdown passes (52) barely outnumber his interceptions (50).

“I can’t turn the ball over,” Darnold said. “That’s one thing that any coach would tell you. I have to stop turning the ball over. As far as I know I am the starting quarterback (moving forward), so I am going to continue to play and continue to give it my all for this team.”

Losing Paradis to a season-ending torn ACL in his left knee is the latest in a long list of injuries this season. The Panthers lost cornerback Jaycee Horn, the team's first-round draft pick, and safety Juston Burris to injuries in Week 3 and both remain out. McCaffrey missed five games with a hamstring injury and Rhule said Monday that Darnold (shoulder), left tackle Cameron Erving (calf) and defensive end Brian Burns (ankle) will have MRIs.

70.6 — Sam Darnold's quarterback rating this season, which ranks 30th in the league.

The Panthers have a difficult remaining schedule beginning with a road trip to Arizona on Sunday. Carolina also has two games remaining against the defending Super Bowl champion Tampa Bay Buccaneers and one each against the Buffalo Bills and New Orleans Saints.