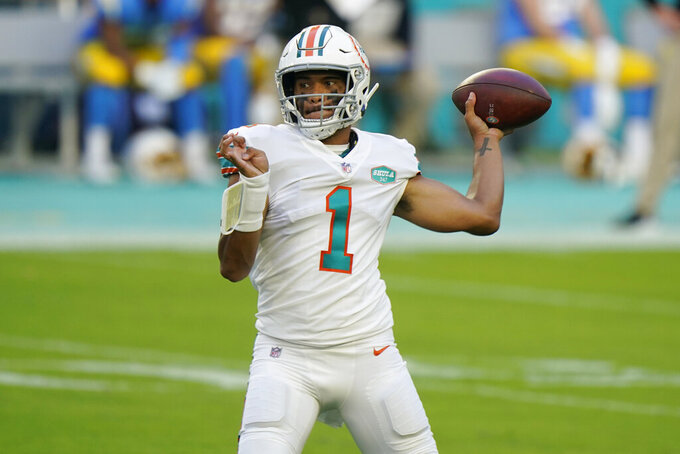 Miami Dolphins quarterback Tua Tagovailoa (1) looks to pass the football during the first half of an NFL football game against the Los Angeles Chargers, Sunday, Nov. 15, 2020, in Miami Gardens, Fla. (AP Photo/Wilfredo Lee)

MIAMI GARDENS, Fla. (AP) — The battle of young quarterbacks was decided by special teams and the Miami Dolphins’ blitz-happy defense.

Tua Tagovailoa had help from a less-heralded rookie while Justin Herbert struggled against a relentless pass rush, and the surprising Dolphins earned their fifth consecutive victory by beating the Los Angeles Chargers 29-21 Sunday.

The Chargers could never catch up after they were hurt by two mistakes in the kicking game that allowed Miami to take a 14-0 lead.

The Dolphins' Salvon Ahmed, making his first career start, ran for 85 yards on 21 carries and scored a 1-yard touchdown on his team's first play. The undrafted Ahmed filled in with two other running backs injured and sparked a ground game ranked fourth worst in the league.

The Dolphins (6-3) pulled within a half-game of AFC East-leading Buffalo. They have their best nine-game record since 2001. Under second-year coach Brian Flores, they have won more games than in all of 2019.

“This is a hungry group," Flores said. “They fight for each other.”

The Chargers (2-7) dropped their third game in a row and have their worst record at this point in a season since 2015.

“We got outplayed in all three phases,” coach Anthony Lynn said. “I was disappointed in the special teams and some of the things that went on there. None of us played well enough today.”

Herbert threw a costly interception and totaled a season-low 187 yards in the QB matchup of high draft picks. Tagovailoa passed for 169 yards with two scores, and improved to 3-0 with no interceptions since taking over for Ryan Fitzpatrick.

“It’s fun winning in general, whether we do well offensively or the defense does something good," Tagovailoa said. “Today was a real team win.”

Herbert was sacked only twice by the Dolphins but often threw before he wanted.

“That team pressures more than anybody else in the National Football League, just about,” Lynn said. “They brought a lot of stuff. There are only so many things you can do. They challenged our protection and at times we did not protect very well. At times they brought one more than we could block.”

The Dolphins made it difficult for Herbert to throw downfield, and they allowed only three catches by Keenan Allen and two by Mike Williams. The Chargers’ 273 yards were a season low.

"Miami did a great job disguising their looks,” Herbert said. “Those guys fly around on defense.”

Miami’s Emmanuel Ogbah had a full sack for the sixth game in a row, and on the next play Xavien Howard picked off Herbert for his fifth interception of the year, setting up Miami’s final touchdown.

“Great break on the ball,” Howard said. “It changed the momentum.”

Most lopsided of all was the special teams matchup. Chargers punter Ty Long bobbled a snap and had his kick blocked to set up the game’s first score on Ahmed’s short run. Quenton Meeks was offside on a field goal attempt by the Dolphins, giving them a first down that led to a touchdown.

The Dolphins were up 17-7 at halftime, increasing their NFL-best first-half point differential to plus-74.

Miami’s Jason Sanders made field goals of 50, 35 and 49 yards but missed from 47, ending his streak of 22 in a row. Jakeem Grant, the NFL leader in punt return yards, helped the Dolphins’ field position with three runbacks for 57 yards.

An onside kick recovery helped the Dolphins seal the win.

The Dolphins were at the Chargers 9 and poised to build on a 14-0 lead when they lost a fumble on a bad snap by Ted Karras. Nick Vigil made a 44-yard return before Tagovailoa tackled him, and Herbert scored on a fourth-down sneak to make it 14-7.

“It’s a lonely feeling at center, but that was a hundred percent on me," Karras said.

Dolphins: LB Kyle Van Noy (hip) left the game in the first half. Miami was without DT Christian Wilkins and four assistant coaches because of COVID-19 protocols.

Dolphins: Miami plays next Sunday at Denver for the first time since 2014. The Dolphins’ next three opponents are a combined 5-21-1.

Chargers: They play the second of three consecutive games against the AFC East when they host the New York Jets on Sunday.