Dolphins' Josh Rosen says he can be franchise quarterback 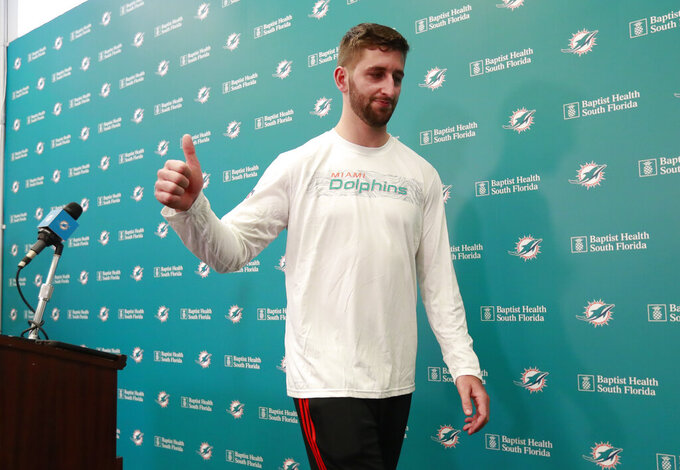 Miami Dolphins NFL football quarterback Josh Rosen gives a thumbs up as he leaves after speaking at a news conference, Monday, April 29, 2019, at the Dolphins training facility in Davie, Fla. The Dolphins traded a 2019 second-round draft pick and a 2020 fifth-round selection to Arizona for Rosen. (AP Photo/Wilfredo Lee) 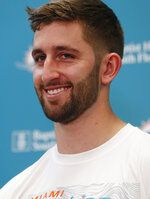 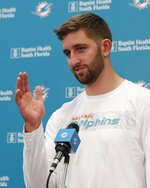 DAVIE, Fla. (AP) — As he embraced a fresh start Monday, Josh Rosen said all the right things, smiled a lot and even cracked a couple of jokes, such as when he noted the phalanx of photographers nearly drowning out his first news conference with the Miami Dolphins .

"These clicks," he said with a chuckle, "are loud."

Rosen does attract clicks, which is a big change for a Dolphins team low on star power. It has been so long since they had a Pro Bowl quarterback that Rosen referred to him as "Mr. Marino."

Despite a rough rookie season that prompted the Arizona Cardinals to discard him, Rosen still believes he can be a Dan Marino-type franchise quarterback. And he's glad to get an opportunity with the Dolphins, who are eager to stop a revolving door at the position that has gone through 19 starters since Marino's last game 20 years ago.

"I couldn't be more excited to be here," Rosen said. "Very rarely do you get a second chance to make a first impression."

As for motivation, Rosen's crooked grin grew wider when he was asked about any chip on his shoulder.

He was the 10th overall pick in the 2018 draft but became expendable in Arizona last week when the Cardinals used the No. 1 overall pick to select Kyler Murray. A day later, the Dolphins acquired him for two draft picks to become part of their rebuilding effort under first-year coach Brian Flores.

"I felt like I got drafted twice," he said.

Rosen took no direct jabs at the Cardinals and acknowledged that in Miami he faces a one-year tryout . If he doesn't play well this season, the Dolphins will likely have a poor record and be well-positioned to take a QB early in the first round in 2020.

Rosen also acknowledged his image needs work. Doubts about his leadership and personality linger despite efforts by Arizona teammates and coaches to dispel them.

He said the issue dates to his years at UCLA.

"I didn't have all my answers as perfectly crafted as I do now," he said. "I said some things off the cuff, and people misconstrued them. ...

"I think I'm a really good teammate. What I've tried to do is not say or do anything extra, just kind of be me and keep my head down, and eventually the story will straighten out. I think it has for the most part. Time and consistency are the best medicine to cure the narrative."

With that in mind, Rosen had answers ready when asked about:

— competing for the starting job with another Dolphins newcomer, veteran Ryan Fitzpatrick. "The timing on whether I play or not is not up to me."

— Pro Football Hall of Famer Marino. "Hopefully I can follow in some semblance of his massive footsteps."