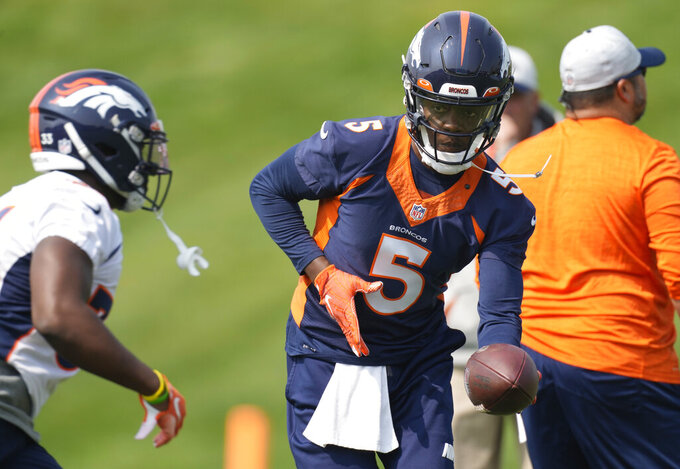 Denver Broncos quarterback Teddy Bridgewater, right, hands off the ball to running back Javonte Williams as they take part in drills during an NFL football training camp at the team's headquarters Tuesday, Aug. 10, 2021, in Englewood, Colo. (AP Photo/David Zalubowski) 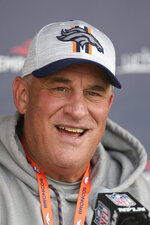 ENGLEWOOD, Colo. (AP) — Drew Lock will start the Broncos' exhibition opener, not because of anything he's done at training camp, but because he's been in Denver longer than Teddy Bridgewater.

Coach Vic Fangio said Tuesday that Lock will start at Minnesota on Saturday night following a pair of joint practices with the Vikings and Bridgewater will start the following weekend at Seattle.

Asked why he's giving Lock the start in Minneapolis, Fangio said, "the same reason we gave him the first team snap in the first practice. No big deal.”

Bridgewater was acquired from Carolina in April.

Fangio told a gathering of reporters, many of whom just got back from the Hall of Fame inductions of Peyton Manning, John Lynch and Steve Atwater, that “not much has changed” in the quarterback competition “since you left.”

“It's even-Steven, not much separation,” Fangio said in what has become a familiar refrain.

While fans might not like that, Fangio said he views it as a positive: “I have confidence in both those guys, I really do.”

Although practicing against the Vikings this week should provide more clarity at quarterback, Fangio said, “Ultimately, the decision will be an examination of everything, really, from the start of training camp to the day we make the decision.”

Before flying out to Minneapolis, Fangio said several members from each team will meet before the first workout Wednesday to talk about what they want to get out of the joint practices, which oftentimes produce hot tempers.

“Instead of having 90 teammates here, there's 180 teammates, OK? We're all teammates for those two practices," Fangio said. "We're just working against each other.

“It's tremendous work if everybody has the right attitude and the right mindset, and we do. I'm happy to do it with Mike Zimmer, I know he'll run a good operation up there," Fangio added. "You always have to be careful who you pick, the teams, to work against and I think Minnesota is a great team to work against.”

Also Tuesday, the Broncos named their season-long diversity coaching fellowship after Marlin Briscoe to honor his groundbreaking contributions to the franchise and modern pro football.

In 1968, Briscoe became the first Black starting quarterback in the Super Bowl era.

“I think it's great,” Fangio said. “Marlin was here in ‘68. I was only 10 at the time — I should have said 2 — so I don’t remember a lot with my eyes, I've seen some of the tapes and he was quick and fast and elusive, looked like a guy that could still play today even though the game has changed so much.”

Mateo Kambui is the team’s first Marlin Briscoe Diversity Coaching Fellow. Kambui played at Florida A&M and was a graduate assistant at Georgia Southern before his arrival in Denver. With the Broncos, Kambui will break down film, prepare scouting reports and assist the offensive coaching staff.