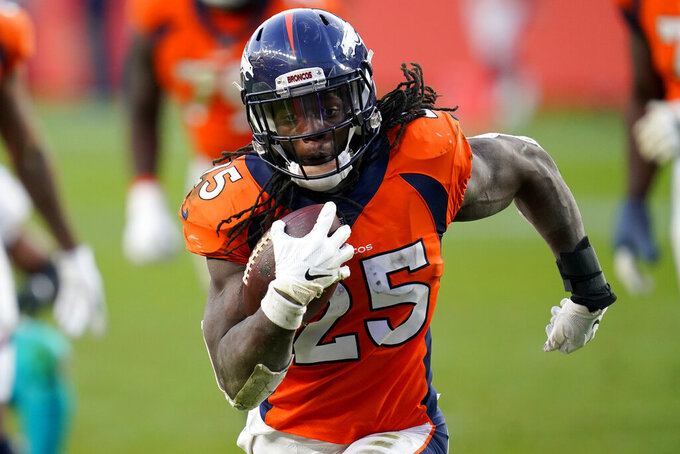 FILE - In this Nov. 22, 2020, file photo, Denver Broncos running back Melvin Gordon (25) runs for his second touchdown against the Miami Dolphins during the second half of an NFL football game in Denver. Gordon will likely avoid NFL discipline after his drunken driving charge was dismissed and he pleaded guilty in Denver County Court on Wednesday, March 10, 2021, to lesser charges of excessive speeding and reckless driving. (AP Photo/David Zalubowski, File)

ENGLEWOOD, Colo. (AP) — Broncos running back Melvin Gordon will likely avoid NFL discipline after his drunken driving charge was dismissed and he pleaded guilty in Denver County Court on Wednesday to lesser charges of excessive speeding and reckless driving.

Gordon was arrested Oct. 13 in downtown Denver when he was clocked going 71 mph in a 35 mph zone. He was cited for speeding and charged with DUI. He didn’t take a breathalyzer at the scene.

A suspension would have sidelined him to start the 2021 season and allowed the Broncos to void $6.5 million of guaranteed salary for 2021.

Gordon is entering the second season of the two-year, $16 million free agent contract he signed a year ago. He led the Broncos in carries (215), rushing yards (986) and TD runs (nine) last season and added 32 catches for 158 yards and a score.

Shortly after his arrest, which was the first off-the-field issue he’s faced in his six-year NFL career, Gordon said, “I’m a little upset that I even put myself in the situation.” And in December, he said he was leaving his legal and contractual issues to his representatives and was focused on football.

“Hopefully I did enough for them to want to keep me here. I do feel like they have something special here growing and I definitely want to be a part of it,” Gordon said at the time. “So, we’ll see, hopefully it works out, and hopefully they like me enough to kind of put all that stuff to the side. I guess in a couple months or so we’ll see what’s up.”