Eagles have luxury of drafting talent over need 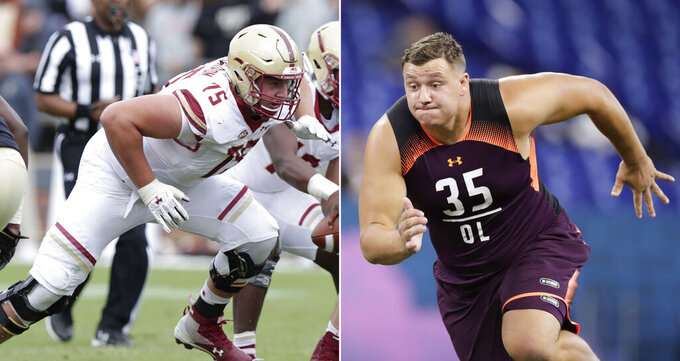 PHILADELPHIA (AP) — Adding proven veterans in trades and free agency has allowed the Philadelphia Eagles to stick to their philosophy of selecting talent over need in the NFL draft.

"We want to retool. We don't want to rebuild when we have this amount of talent on our team," said Howie Roseman, the team's executive vice president of football operations. "We don't know what we're going to need a year from now, two years from now, and we're trying to get long-term players on our team."

Focusing on filling a hole at a specific position hasn't worked out well for Philadelphia. Two examples this decade were linebacker Marcus Smith (No. 26, 2014) and guard Danny Watkins (No. 23, 2011). Smith never started a game in three seasons and Watkins was gone after two.

"I've been humbled by some mistakes I made in terms of valuing a position over the best particular player," Roseman said. "That's one of the things that's exciting where we are right now. We can go play right now. We think we're a pretty good team. So we can go into the draft knowing we don't have anything we have to do or we have to fill at any position, and we can base it on what's best long term."

They enter the draft with seven picks, including No. 25 in the first round and Nos. 53 and 57 in the second. Roseman and Joe Douglas, vice president of player personnel, can go in several directions. Trading down to stockpile more picks this year or for the future is always an option. They also have enough assets to move up if they wanted.

The Eagles value depth on the offensive and defensive lines. They could take a left tackle to eventually replace Jason Peters, a run stuffer in the middle of the D-line or an edge rusher. Among the players who made pre-draft visits were: Boston College OL Chris Lindstrom, Oklahoma OL Cody Ford, Louisiana Tech DE Jaylon Ferguson, Clemson DTs Christian Wilkins and Dexter Lawrence, and Notre Dame DT Jerry Tillery.

Acquiring Howard won't preclude the Eagles from drafting a running back. Several mock drafts have Alabama's Josh Jacobs going at No. 25, but that would be a departure from an organizational philosophy. The team hasn't selected a back in the first round since Buddy Ryan chose Keith Byars at No. 10 in 1986. LeSean McCoy was the last back the Eagles drafted in the second round. McCoy, chosen No. 53 overall in 2009, became the franchise's all-time leading rusher before Chip Kelly traded him to Buffalo.

The Eagles prefer players who can play several positions, especially in the secondary and on the offensive line. Avonte Maddox started nine games at cornerback and safety as a rookie last season. Isaac Seumalo, a third-round pick in 2016, played everywhere upfront before settling in at left guard.

"We talk about position-less players," Roseman said. "That's a huge value in a league where you are going to have injuries. Those are traits that add to the value of the player."

Under Roseman, the Eagles have always been active during the draft. Besides three picks in the top-60, the team has two picks in the fourth round, one in the fifth and one in the sixth.