Eagles move up to get future left tackle Andre Dillard 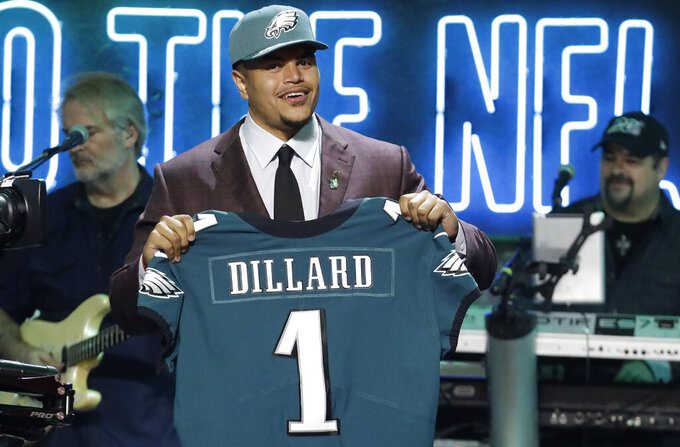 Washington State tackle Andre Dillard shows off his new jersey after the Philadelphia Eagles selected him in the first round at the NFL football draft, Thursday, April 25, 2019, in Nashville, Tenn. (AP Photo/Steve Helber) 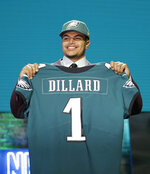 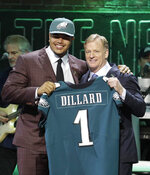 The Eagles traded up three spots to select Washington State left tackle Andre Dillard with the 22nd pick in the first round of the NFL draft Thursday night. Philadelphia sent Baltimore the 25th pick, a fourth-rounder (No. 127) and a sixth (No. 197) to move up.

Dillard isn't expected to be in the starting lineup this season unless the offensive line has injuries. He'll learn from nine-time Pro Bowl left tackle Jason Peters, who enters his 15th season at 37 years old. Peters started every game last season after missing nine in 2017.

"This wasn't what we had anticipated. Our evaluation was this was the best tackle in the draft," Eagles personnel boss Howie Roseman said. "Usually, those guys go in the top 10. That's how we had it rated. When he started to fall, we saw an opportunity to get a top-10 player at an important position."

The 6-foot-5, 315-pound Dillard started 39 games for the Cougars. He's an athletic blocker who excelled at pass protection. Scouting reports say Dillard needs to work on his run blocking. He didn't have to do much of it at Washington State, which predominantly threw the ball on offense.

"He wants to be great and he takes to coaching well," Roseman said.

Eagles vice president of player personnel Joe Douglas said the team spent a lot of time with Dillard at the Senior Bowl and came away quite impressed.

"His foot quickness, is lower body strength, his ability to redirect, those are very intriguing to us," Douglas said.

The Eagles were in position to select a player who doesn't have to contribute right away after filling several needs in the offseason through free agency and trades.

After winning the Super Bowl in 2017 with backup quarterback Nick Foles filling in for Wentz, the Eagles reached the second round last season. Foles again led the team down the stretch and into January after Wentz was injured.

"He's a special player," Eagles coach Doug Pederson said of Dillard. "He has a great opportunity to come in and learn from one of the best left tackles in the game."

The Ravens took Oklahoma wide receiver Marquise Brown with Philadelphia's pick. Brown was a player some thought the Eagles would select. Roseman, however, has always valued offensive and defensive lineman in the first round.

The Eagles have two picks in the second round on Friday night, Nos. 53 and 57. They don't have a third-round pick.

Running back, linebacker and receiver are among the positions the Eagles could target but they also could go a defensive back.