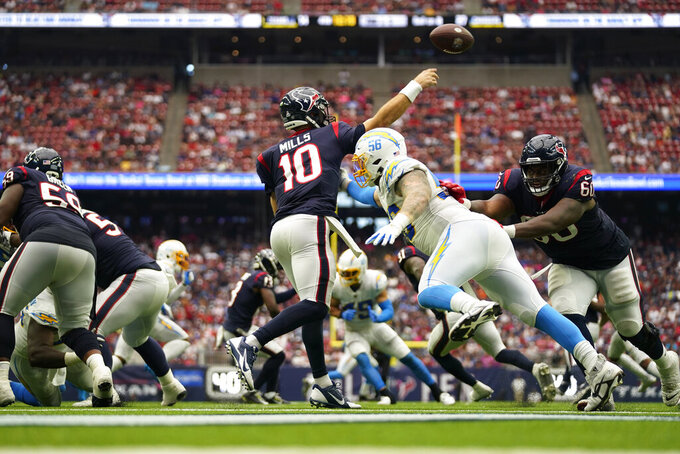 HOUSTON (AP) — Austin Ekeler was off to a slow start following a 20-touchdown season, and the Chargers believed he was due for a breakout game.

He had it Sunday, scoring his first three touchdowns of the year to lead Los Angeles to a 34-24 win over the Houston Texans.

“To get him going today was big,” Los Angeles coach Brandon Staley said. “He played like a captain today beyond his performance on the field. He really led our football team on offense and just played with the energy that he’s known for and just a complete performance by him.”

Justin Herbert threw for 340 yards and two touchdowns as the Chargers built a big early lead and held on.

Houston scored 17 straight points to get within three with about 8 1/2 minutes left. The Chargers (2-2) then put together a 12-play, 84-yard drive, capped by Ekeler's 14-yard reception, to put the game away and snap a two-game skid.

The Chargers faced fourth-and-2 from their 45 when Herbert connected with Ekeler on a 21-yard reception to keep the game-sealing drive going.

Ekeler, who had struggled this season as the Chargers ranked last in the league in yards rushing, scored on runs of 10 and 20 yards in the second quarter as Los Angeles raced to a 21-0 lead.

Ekeler still has work to do to live up to last season, when he ran for 12 scores and caught eight TD passes.

“I had a few opportunities today and was able to capitalize,” he said. “That’s one week, but now, let’s do it again.”

The banged-up Chargers looked great early, scoring on five of their first six possessions to build a 27-7 lead by halftime despite Herbert still dealing with a rib injury and the team playing without star defender Joey Bosa, who had groin surgery, and top receiver Keenan Allen.

Herbert said his ribs were feeling better and that it helped that his line protected him well. He struggled last week in his first game playing with the injury, a lopsided home loss to Jacksonville.

“It was huge for us,” he said. “It’s never fun losing. ... It starts up front with our offensive line. They did a great job of blocking all day, protecting, giving me enough time to get the ball off and the guys on the outside making plays.”

The Texans (0-3-1) scored in the fourth quarter for the first time this season. They came in having been blanked 30-0 in the final period. But it wasn’t enough as they remained winless in coach Lovie Smith's first season.

Davis Mills threw for 246 yards with two touchdowns and two interceptions, getting going after halftime after failing to move the offense effectively in the first half. A bright spot for the Texans was the continued strong play of rookie Dameon Pierce, who had 131 yards rushing, highlighted by a 75-yard scoring run in the second quarter.

“It’s a play we’ve been working on all week,” Pierce said. “What’s crazy is in practice we kind of couldn’t get it right. In the game it worked out perfect.”

It was the third-longest run in franchise history and the longest run by an NFL rookie since Miami’s Kalen Ballage also had a 75-yard run in 2018.

Herbert topped 300 yards passing for the 19th time, tying the record for such games in a player's first three seasons. It was his seventh straight 300-plus-yard game on the road.

Jalen Reeves-Maybin forced a fumble by DeAndre Carter on the ensuing kickoff and M.J. Stewart recovered to give Houston the ball back at the 16. The Texans settled for a field goal.

Things went wrong for Houston immediately when Nasir Adderley intercepted Mills on the third play of the game and returned it 30 yards.

Herbert then connected with Gerald Everett on an 18-yard TD.

Mike Williams, who finished with 120 yards receiving, had a 50-yard catch to set up Ekeler's second score, which made it 21-0.

Houston LB Blake Cashman left in the first half with a head injury.

Houston rookie receiver John Metchie III, who was diagnosed with leukemia this summer, was on the sideline Sunday as the league promoted cancer awareness with its “Crucial Catch” campaign to encourage early detection and risk reduction.

A video was shown on the stadium’s big screens at the end of the first quarter showing Metchie hosting other people fighting cancer at the stadium this week.

Metchie was diagnosed with acute promyelocytic leukemia. The second-round pick from Alabama is taking time off from football to focus on his health and recovery.

He received a big ovation from the crowd when he waved to fans as he was shown on the big screens wearing a hoodie that said “Intercept Cancer.”

Chargers: At Cleveland next Sunday.

Texans: At Jacksonville next Sunday.