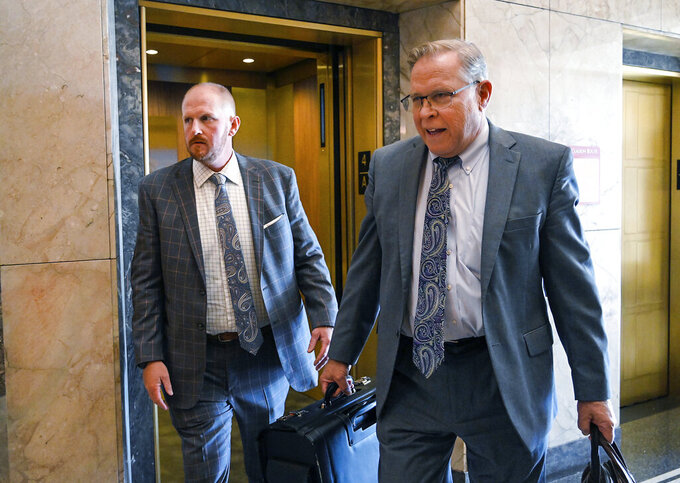 Britt Reid, left, walks to a courtroom with his attorney J.R. Hobbs, right, Tuesday, Nov. 1, 2022, at the Jackson County Courthouse, in Kansas City, Mo., to be sentenced for a drunk driving conviction. The former assistant coach and son of head coach Andy Reid in September pleaded guilty to driving while intoxicated and causing a 2021 crash that severely injured a 5-year-old girl. (Tammy Ljungblad/The Kansas City Star via AP)

Reid pleaded guilty in September to driving while intoxicated causing serious bodily injury. The charge carries a maximum penalty of seven years in prison, but prosecutors had agreed to ask for a maximum sentence of four years in prison. Reid sought probation. The injured girl's family had opposed the plea deal.

Circuit Judge Charles H. McKenzie sentenced Reid on Tuesday and he was set to be taken into custody.

Prosecutors said Reid, the son of Chiefs Coach Andy Reid, was intoxicated and driving about 84 mph (135 kph) in a 65 mph zone when his Dodge truck hit the cars on an entrance ramp to Interstate 435 near Arrowhead Stadium on Feb. 4, 2021.

A girl inside one of the cars, Ariel Young, suffered a traumatic brain injury. A total of six people, including Reid, were injured. One of the vehicles he hit had stalled because of a dead battery, and the second was owned by Ariel’s mother, who had arrived to help.

After the sentencing, Ariel's family issued a statement through attorney Tom Porto saying they were outraged that Reid didn't get the full seven years allowed by law.

“No amount of prison time will ever be enough to punish the Defendant for the pain and suffering he caused this family and the ongoing difficulties that Ariel will continue to endure for the rest of her life,” the statement said.

“He sincerely regrets and accepts responsibility for his conduct and hopes and prays for (Ariel's) continued recovery,” the statement said.

Jackson County Prosecutor Jean Peters Baker said after the sentencing that she had been confident that Reid's notoriety would not influence the sentence. She had argued during the hearing that Reid should be sentenced to four years because he made a series of bad decisions that resulted in long-term pain to Ariel and her family.

“I think what happened today was justice," Peters Baker said.

Before sentencing, a victim impact statement from Ariel’s mother, Felicia Miller, was read into the record. She said the five victims of the crash were offended that Reid sought probation and they did not accept his apologies for his actions.

Miller said her daughter, who was in court Tuesday, has improved but still drags one of her feet when she walks, will see a doctor about leg braces, has terrible balance and must wear thick eyeglasses.

She noted that Reid had a prior conviction and has served time in prison for DUI.

"And he’s asking for probation? On what planet does this conduct deserve probation? Can people really get drunk and give a 5-year-old a brain injury and think they should get probation?” wrote Miller.

Reid apologized before sentencing, turning to look at Ariel and her family as he spoke. He said he has a daughter the same age as Ariel and his family prays for her every night.

“I understand where Ms. Miller is coming from. I think I would feel the same way,” he said.

Reid underwent emergency surgery for a groin injury after the crash. The Chiefs placed him on administrative leave, and his job with the team ended after his contract was allowed to expire.

This is not the first legal issue for Reid, who graduated from a drug treatment program in Pennsylvania in 2009 after a series of run-ins with law enforcement. His father was coach of the Philadelphia Eagles at the time.

The Chiefs reached a confidential agreement with Ariel’s family in November to pay for her ongoing medical treatment and other expenses.

This story was first published Nov. 1, 2022. It was updated Nov. 2, 2022, to correct attribution of a quote in the 10th paragraph to a statement from Reid’s attorney.