With ex-college coach, No. 1 QB, Cards show path for Jaguars 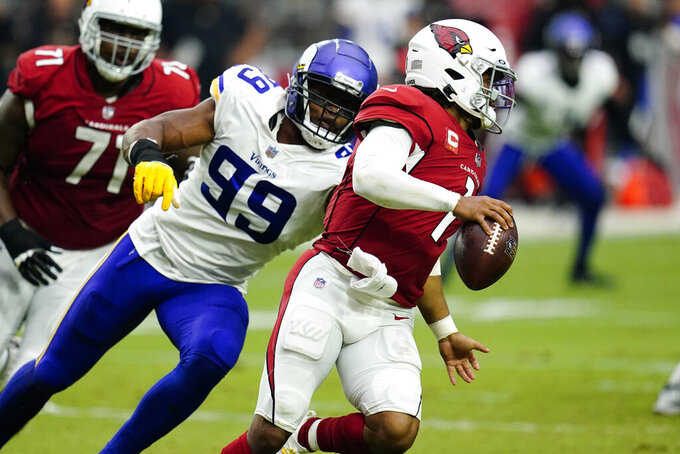 JACKSONVILLE, Fla. (AP) — Kliff Kingsbury kept a straight face for several seconds when asked about the parallels between himself and Urban Meyer.

Then he chuckled — along with everyone else in the room.

Now, though, Meyer probably should ask questions and take notes when Kingsbury brings his Arizona Cardinals to Jacksonville on Sunday. The Cardinals (2-0) appear to be on a playoff trajectory in their third season with Kingsbury as head coach and 2019 No. 1 overall pick Kyler Murray at quarterback.

The Jaguars (0-2), meanwhile, have been blown out twice and have obvious issues on both sides of the ball.

“When you pick No. 1, you know you’re going to have some growing pains – that’s just part of it – as you build,” Kingsbury said. “But you look at the team they put together. They’re very talented. Playing a lot of young players, but athletic as anybody in the league. … They got it going in the right direction.”

Jacksonville has lost 17 consecutive games, including six in a row by double digits. The team is nine losses away from tying the NFL mark for futility: expansion Tampa Bay’s 26-game losing streak set in 1977.

Meyer, though, insists he has two of the three things needed for a turnaround: a good locker room and healthy players. He’s still waiting for the final piece: a spark.

“Michael Jordan said it in that documentary that the Chicago Bulls struggled for years and years and all they needed was a spark,” Meyer said. “… And that spark, that’s stepping in front of a ball, intercepting it. A spark is a great player making a great play. And how do you do that? It’s called competitive excellence. You do it in practice. You work it and you work to put the players in those positions.”

Murray has been Arizona's spark. He has seven touchdown passes and two rushing scores, and the Cardinals are averaging 36 points a game.

“He’s definitely different," Jaguars safety Rayshawn Jenkins said. "He's more of what the QBs are going to nowadays in the NFL, those scramble guys that can make plays outside of the pocket as well as downfield. ... You have to account for him."

“I watch it, turn it off, walk away, come back, watch it,” Meyer quipped.

Jaguars coaches want Lawrence to start taking check downs – “the power of completions’’ — and run more when the pocket collapses. The rookie completed 14 of 33 passes for 118 yards last week against Denver.

“We want to win, but I can feel it’s getting better, and the morale’s still really good. We have a great culture and a good environment here. It’s going to take a little time, but we’re getting there.”

Cardinals linebacker Isaiah Simmons and Lawrence have been friends for years, going back to their time together at Clemson. For the first time, Simmons might actually get the chance to tackle him.

“In pads, I’ve never really been able to touch him other than a high-five or something,” Simmons said, thinking about college practices. “This will be a first.”

Added Lawrence: "I know he’s wanted to a few times, but he’ll have his chance this weekend. I’m sure I’ll be hearing from him all game.”

Murray has 51 yards rushing and two touchdowns, a fairly pedestrian number considering he finished with 819 yards on the ground last season.

But the third-year quarterback has made some of his biggest gains while scrambling. He found rookie Rondale Moore for a 77-yard touchdown in last Sunday’s 34-33 win over Minnesota.

“It’s a huge part of the game,” Murray said. “It’s tough to score in the red zone, let alone score at all with defenses being good. Sometimes stuff breaks down and you’ve got to be able to make plays.”

Jacksonville likely will have a retooled secondary against DeAndre Hopkins, Moore, Christian Kirk and A.J. Green. CJ Henderson (groin) missed practice all week and Tre Herndon has yet to fully practice since injuring his right knee in the team's preseason opener.

The Jaguars probably will have to start rookie Tyson Campbell opposite Shaquill Griffin, with second-year pro Chris Claybrooks serving as a nickel cornerback and newly signed Nevin Lawson being the primary backup.