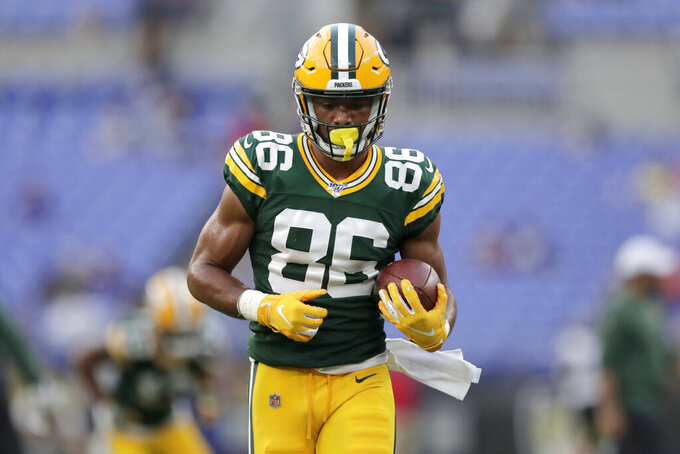 FILE - In this Aug. 15, 2019, file photo, Green Bay Packers wide receiver Malik Taylor works out prior to an NFL football preseason game against the Baltimore Ravens in Baltimore. Taylor never lost confidence he could find a home in the NFL, even as a Division II player who spent much of his senior season injured. Taylor’s faith has been rewarded. The 2019 undrafted free agent from Ferris State survived the Packers’ final round of cuts and is on the 53-man roster for their season opener Sunday at Minnesota. (AP Photo/Julio Cortez, File)

Green Bay Packers receiver Malik Taylor never lost confidence he could find a home in the NFL, even as a Division II player who spent much of his senior season injured.

The 2019 undrafted free agent from Ferris State survived the Packers’ final round of cuts and is on the 53-man roster for their season opener Sunday at Minnesota.

“It still hasn’t hit me yet,” Taylor said Monday. “I don’t think it’s going to hit me until we get into the Vikings’ stadium.”

One of the bigger surprises in the Packers’ final roster was that the 6-foot-1 Taylor made it instead of Jake Kumerow, who had caught a touchdown pass each of the last two seasons. Kumerow joined Buffalo’s practice squad.

“I think Malik had an outstanding camp,” Gutekunst said. “He’s an explosive athlete that’s got a lot in front of him. He really did a nice job for us last year, and I think he just really built off of what he did last year. So we’re excited to kind of see where he can go.”

“I pretty much put everything into that one goal,” Taylor said. “As far as going out, things like that, I put all that on the backburners. I pretty much didn’t do anything that didn’t have to do with getting to this level. Yeah, that was a very real goal for me, and I pretty much tried to do everything I could to get here.”

His final college season made that goal tougher.

Taylor missed seven games his senior year due to a hamstring injury. Taylor returned for Ferris State’s playoff run as the Bulldogs reached the Division II championship game, but he wasn’t ever back to 100%.

“It was probably one of the roughest times in my life, just knowing that could be the reason I didn’t get to this level,” Taylor said. “That’s where my faith in God really just grew. I have people in my corner, like my parents, my girlfriend. They all just stayed in my ear.”

“He was traveling sometimes 50 miles every other day just to get treatment from this specialist in Grand Rapids,” Annese said. “It was pretty incredible how determined he was. He never wavered, continually worked.”

Taylor signed with Tampa Bay after the 2019 draft, but the Packers picked him up after the Buccaneers released him. Taylor believes his experience on Green Bay’s practice squad last year helped him this summer.

“He’s extremely talented,” Packers coach Matt LaFleur said. “He’s got to put it all together and take what he does on a daily basis on the practice field and it’s got to transition to the game field. We’re excited about what he can bring to our offense. He’ll get his opportunity.”

Taylor plans to make the most of that chance. That was evident in the way he reacted to the news he had made the team.

“I thought the feeling I (would) have is, you know, I made it, it’s like a big weight off my shoulders,” Taylor said. “But it really wasn’t that feeling. It was more of another flame lit inside of me. It’s just another level of motion, another level of determination, and I’m just ready to attack tis thing.”