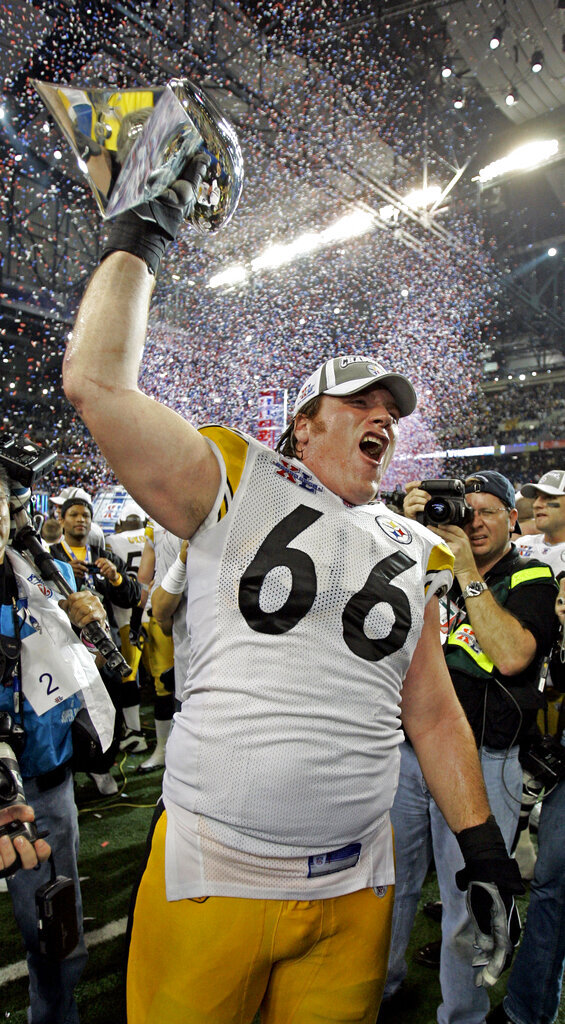 FILE - In this Feb. 5, 2006, file photo, Pittsburgh Steelers' Alan Faneca holds up the Vince Lombardi Trophy after defeating the Seattle Seahawks in the Super Bowl 15 football game in Detroit. The most memorable example of Faneca's brilliant blocking and dominance up front came on football's biggest stage in February 2006 during Pittsburgh's 21-10 victory over Seattle in the Super Bowl. Faneca was elected to the Pro Football Hall of Fame in his sixth year of eligibility and it is an honor that many believe was a long time coming. (AP Photo/Michael Conroy, File)

Alan Faneca cracked open a fresh notebook at the start of each of his 13 NFL seasons and diligently filled it throughout the year with anything he thought might help him.

Page after page, the six-time All-Pro guard would scribble goals, game plans, tips, achievements and things he needed to improve on and off the field. He'd also include things that ticked him off so much, he wanted to be sure to not forget — or repeat — that feeling.

“I was a goal setter my whole life and never really realized that about myself, I never thought about it,” Faneca said. “But I was always putting things out there and reaching as far as I can go instead of just, you know, reaching for the next rung on the ladder. Just reaching as far as you can reach.”

Written on the inside cover of one of those notebooks from early in his career with the Pittsburgh Steelers is the now-prophetic message:

Faneca can finally put a checkmark next to that once incredibly lofty goal.

In his sixth year of eligibility, he was elected to the Pro Football Hall of Fame. It was a wait that was admittedly frustrating for him at times, but one he believed would eventually end with his bronze bust — and that special notebook — on display in Canton, Ohio.

That's the same all-business approach that powered the man known by his teammates as “Big Red” for his then neck-length red hair and sometimes rugged beard through his college career at LSU and then in the NFL with the Steelers, New York Jets and Arizona Cardinals.

“Alan, he was always the first guy in the building, the last guy to leave,” said former Steelers wide receiver Hines Ward, who will be Faneca's presenter for the induction ceremony. “He really wasn’t as vocal, but when he spoke, everyone listened. I just looked at him as, to me, he was Superman. He couldn’t do any wrong.

“I rarely ever heard any coach yell at him or scream at him. Man, Alan Faneca is just a Hall of Famer. A great man, great person.”

The greatness of Faneca — who's now clean-shaven, an avid runner and nearly 100 pounds lighter from his playing days — on the field was clear. Coach Bill Cowher, who's also being inducted this year, said Faneca was “the heart and soul” of the Steelers' offensive line for 10 seasons after being the 26th overall pick in the 1998 NFL draft.

The most memorable example of Faneca's brilliant blocking and dominance up front came on football's biggest stage in February 2006 during Pittsburgh's 21-10 victory over Seattle in the Super Bowl.

With the Steelers leading 7-3 in the third quarter, Ben Roethlisberger handed off to Willie Parker. Faneca pulled to the right from his spot at left guard, made a block and paved a hole through which Parker scampered 75 yards for a touchdown that remains the longest scoring run in Super Bowl history.

"It was just classic Alan Faneca," recalled Ward, selected MVP of that Super Bowl. “He’s pulling around, he sprang the guy open and I went down to get the safety and I just see No. 66 in the corner of my eye. The next thing I know, I see Willie gashing down the field to score a touchdown. I said, ‘Yeah, that had Alan Faneca’s name all on it.’”

Faneca was a consistent and reliable force whose work ethic served as an example for the rest of the offense. Beginning with his third season, he missed only one start the rest of his career — a span of 176 games.

And he's still doing that today.

Faneca was hired in May as the head football coach at Frank W. Cox High School in Virginia Beach, Virginia, where he and his wife Julie and their three kids have lived for nearly four years.

“I'm trying to develop good, upstanding citizens,” Faneca said. “That’s first and foremost, and we’ll do that through football. I’m going to give them the best that I have so they can give me the best they have.”

He has been doing that for himself nearly his whole life, including overcoming an epilepsy diagnosis at 15 years old when he wasn't sure football could even be part of his future. Faneca's doctor prescribed medication to control the seizures and cleared him to keep playing.

So, Faneca, who still takes two pills three times a day and hasn't had a seizure in about eight years, focused on being the best. That drive took him from the high school fields of Louisiana to a brilliant college career at LSU and then 10 years with the Steelers, two with the Jets and one with the Cardinals.

All the way to the Hall of Fame.

“You play with dreams and goof off in the yard and pretend and all that stuff,” Faneca said. "But I was never like thinking this big, that it was really a possibility or that it was going to happen — especially to have it happen to the degree that I was able to do it.

“If you told a 10-year-old me that I would be right here one day, man, that would have just floored me."