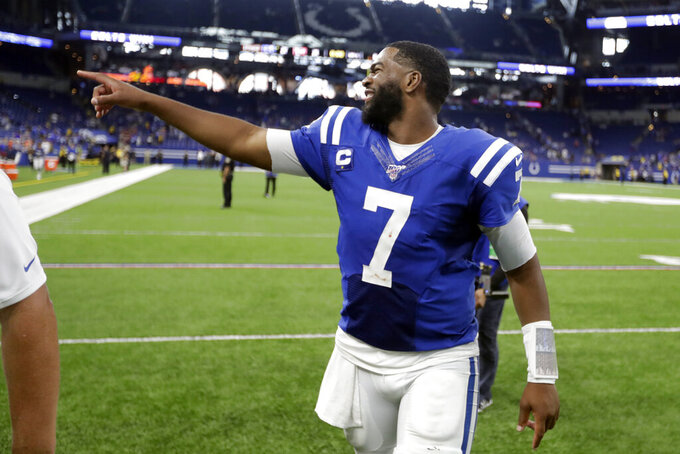 Week 4 of fantasy football can be subtitled, "Life Without Saquon" for owners who must reset their running back depth after losing the Giants star to a high ankle sprain.

It's also another week without Cam Newton, which translates to a heavy workload for Panthers running back Christian McCaffrey.

The initial bye week means the Jets and 49ers are sidelined. Considering the lack of fantasy contributions from either team, most owners won't feel a great loss.

START: Jacoby Brissett, QB, Colts: His average of 228 passing yards per game is pedestrian, but Brissett has thrown multiple TD passes in each of his first three games. He faces a Raiders defense that has yet to make an interception and is 28th overall in opposing passer rating at 116.8.

SIT: Jameis Winston, QB, Buccaneers: The Rams are third overall in fewest fantasy points allowed per game to opposing QBs (6.85 PPG). Winston tossed for 380 yards and three touchdowns against the Giants last week, but averages a paltry 2.5 air yards per pass attempt, a number that plays into the hands of the Rams' pass rush.

START: Kerryon Johnson, RB, Lions: He's become a high-volume back who could have his breakout game at the expense of the Chiefs, who allow a league-high 6.2 yards per carry to opposing backs. Johnson averages 17.6 touches per game, and his underrated pass-catching skills will make him more intriguing in PPR formats.

SIT: Nick Chubb, RB, Browns: Cleveland's anemic offensive production won't improve against the Ravens, who are seventh overall in fewest fantasy points allowed per game to opposing backs. Chubb has just one touchdown in his first 69 touches from scrimmage and has yet to rip off a run of longer than 19 yards.

START: Sterling Shepard, WR, Giants: Big Blue will become big on the pass without Barkley. Enter Shepard, who pulled in seven of a team-best nine targets from rookie quarterback Daniel Jones for 100 yards and a score in last week's win over the Buccaneers. He should exceed double-digit targets against a Redskins pass defense that allows 46.90 fantasy points and 2.7 touchdowns per game to opposing receivers.

SIT: Josh Gordon, WR, Patriots: The 11 targets in Week 3 is encouraging, yet much of those came after Julian Edelman was injured. The big-play potential is there, but Gordon remains too much of a risk to play. Well, that and the Bills are sixth in fewest fantasy points allowed per game to opposing wideouts.

START: Will Dissly, TE, Seahawks: Quickly become a favorite of Russell Wilson, Dissly, who has three touchdowns in the past two games, gets the best assignment of anyone this week at his position: a date against the Cardinals, who are last in defending opposing tight ends. How bad are the Cards? Their 25.17 FPG allowed is almost 10 points higher than the Buccaneers, who are 31st.

SIT: Jimmy Graham, TE, Packers: His Week 1 outing appears to have been a mirage, as Graham has all of two targets the past two games. The Eagles do a serviceable job in defending tight ends, but Thursday night's game will likely center around Aaron Rodgers lighting up an Eagles pass defense ranked 29th in fantasy points allowed per game to opposing wide receivers.

START: John Ross, WR, Bengals: The speedster is finally being effectively utilized, evidenced by his 22.5 yards per catch and six big plays, the latter ranks him tied for second in the NFL. All Andy Dalton has to do is get the ball to Ross in open space, as he is also seventh in the league with 152 yards after the catch.

SIT: Kirk Cousins, QB, Vikings: He's 29th in completion percentage and 31st in yards. Even if it wasn't the Bears that Cousins was facing, he'd be a strong sit, but with Chicago ranked ninth in fewest fantasy PPG allowed to opposing quarterbacks, the suggestion to sit Cousins is stronger.

START: Chris Carson, RB, Seahawks: Fumbling issues aside, Carson and his 18.3 touches per game will have a great opportunity to establish himself as Seattle's lead back. He'll run (and catch) into the heart of a Cardinals defense that allows 6.3 yards per play, putting them 23rd overall in that category.

SIT: Jamaal Williams, RB, Packers: Williams got more touches in the game than starter Aaron Jones in last week's win over the Broncos. Although he's a solid receiver out of the backfield (7-for-8, 55 yards and a touchdown), Williams manages just 3.3 yards per carry. Philly's front seven is a huge reason why the Eagles allow just 2.8 yards per rush, second only the Pats' 2.3 YPR. It's best to move on.

START: Mike Williams, WR, Chargers: Count on Williams ending his touchdown drought against the Dolphins, who allow 2.3 passing touchdowns per game. He and Keenan Allen will thrive considering that quarterback Philip Rivers will be throwing against a Miami defense that allows a league-high 139.1 passer rating.

SIT: Trey Burton, TE, Bears: Good news: Burton has caught six of his first seven targets. Bad news: he's managed just 25 yards from them. Chicago is 29th in passing yards, and although quarterback Mitchell Trubisky could spend much of the game attempting to bring life into the vertical game, Burton will continue to be the odd man out.

START: Daniel Jones, QB, Giants: Only the Dolphins are worse than the Redskins when it comes to fantasy points allowed per game to opposing quarterbacks. Buy into Jones and the pass-heavy offense that will be able to pick apart a hapless Washington pass defense that has already allowed nine touchdown passes.

SIT: Dede Westbrook, WR, Jaguars: Westbrook shares the team lead (with Leonard Fournette, go figure) with 20 targets, yet his results have been limited at best. Westbrook averages just 7.2 yards per catch and appears to have lost his status to DJ Chark as the team's top downfield option. Facing Denver and its sixth-ranked pass defense isn't going to Westbrook's cause.