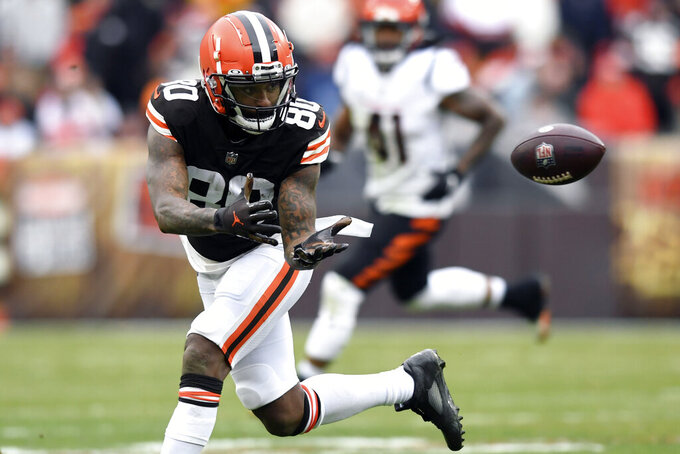 FILE - Cleveland Browns wide receiver Jarvis Landry (80) makes a catch during the first half of an NFL football game against the Cincinnati Bengals, Jan. 9, 2022, in Cleveland. Free agent Landry, a five-time Pro Bowler, is joining the New Orleans Saints. The eight-year veteran confirmed the move on Twitter on Friday, May 13, 2022. (AP Photo/Nick Cammett, File)

The eight-year veteran confirmed the move on Twitter on Friday.

Landry spent his first four pro seasons with Miami before joining the Browns. He led the league in receptions in 2017 with 112, his final season with the Dolphins.

Landry, 29, is coming off his worst season as a pro. He was instrumental in improving Cleveland’s culture and helping the Browns break their long playoff drought in 2020. But he missed time in 2021 with a knee injury and finished with career lows in receptions (52), yards (570) and touchdown catches (2).

The Browns considered restructuring his contract, but the sides couldn’t strike a deal and Cleveland released Landry in March. Landry finished with 288 catches for 3,560 yards and 15 TDs with the Browns.

He had hoped to win a Super Bowl title in Cleveland with close friend and college teammate Odell Beckham Jr. They did get one playoff win together before Beckham forced his way off the Browns’ roster last season and wound up with the Rams.

And now Landry heads to the Saints, who hope to get star receiver Michael Thomas back. Thomas missed last season with an ankle injury.

New Orleans used a first-round draft pick on Ohio State receiver Chris Olave, and also expects quarterback Jameis Winston to be healthy after he had knee surgery and played in only six games, going 4-2.