Frustration shows after Bills come up short in South Beach 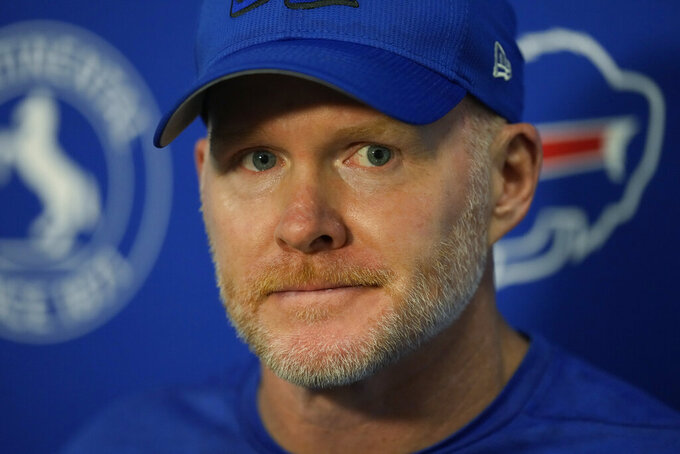 Buffalo Bills head coach Sean McDermott listened to a question during a post game news conference at the end of an NFL football game against the Miami Dolphins, Sunday, Sept. 25, 2022, in Miami Gardens. The Dolphins defeated the Bills 21-19. (AP Photo/Rebecca Blackwell)

ORCHARD PARK, N.Y. (AP) — Forget the excuses of the Buffalo Bills being undermanned and overheated in the South Florida humidity.

If there’s one moment encapsulating the frustration of Buffalo’s first loss of the season, it came via a 7-second CBS video clip showing offensive coordinator Ken Dorsey’s volatile eruption in the visitor’s coaches booth following a 21-19 decision to the Dolphins.

Ripping off his headset and violently bouncing it off the desk, Dorsey proceeded to trash his game notes before someone had the wisdom to cover the camera lens with their hand.

While Dorsey can no longer laugh off questions about his ultra-competitive reputation, which has been well-documented by players and fellow coaches since ascending to the job this offseason, the Bills must own up to an outcome mostly of their own undoing in a game they dominated Miami in nearly every statistical category.

Their defense, minus four regulars and featuring a secondary of rookies and backups, limited the Dolphins to a meager 212 yards and 15 first downs. Buffalo’s offense, despite finishing the game with a piecemeal line, gained 497 yards on a near-franchise record 90 plays from scrimmage.

And yet, a series of critical errors cost them.

There were mishandled snaps. And a blown coverage, which led to Jalen Waddle's 45-yard catch — on third-and-22, no less — to set up the go-ahead score.

The Bills failed to respond in being thwarted on five snaps from inside the Miami 6. And a holding penalty on backup lineman David Quessenberry with 18 seconds left led to Buffalo not having enough time to make up the ground and attempt a field goal before time expired.

As much as the Bills (2-1) deserve credit for showing perseverance, what mostly stood out was a team crumbling in familiar fashion with the outcome on the line.

Buffalo can boast having tied the NFL record in winning its past 20 games by 10 or more points.

What’s worrisome is how the Bills have dropped eight straight, including playoffs, in games decided by seven points or fewer. The streak is tied for the NFL’s sixth longest since 2010.

Those losses include squandering a three-point lead in the final 13 seconds of regulation in an eventual 42-36 overtime loss to Kansas City in the AFC divisional playoff round in January.

There was their 14-10 loss to New England last season, in which the Patriots attempted just three passes. And let’s not forget quarterback Josh Allen losing his footing in being stuffed near the goal line on fourth down in the final seconds of a 34-31 loss at Tennessee in October.

Coach Sean McDermott downplayed Buffalo’s struggles in tight games two weeks ago, when noting how the Bills overcame their first-half struggles in rallying to outscore the Rams 21-0 in the second half of a 31-10 win.

And yet, if the Bills want to be measured as Super Bowl contenders, they’ll face similar questions until showing an ability to win in the clutch. Last season’s final seven playoff games were decided by six points or fewer.

The playoffs are still months away, and perhaps the Bills get the benefit of the doubt for suggesting the loss can be galvanizing, given the adversity they faced.

“Sometimes a loss like this is good medicine,” Von Miller said. “We got high-character guys. Adversity reveals character. This is all just adversity and I’m excited to see how we respond.”

Buffalo will face even more adversity with offensive lineman Tommy Doyle out with a torn ACL. Cornerback Christian Benford will miss a few weeks with a broken hand, and backup receiver Jake Kumerow will be week to week with a high ankle sprain.

“That was a heck of an effort. Never want to come up short,” McDermott said. “There’s no ribbons for second place, and they know it.”

An offense which has topped 400 yards in six straight games, including playoffs, going back to last season.

A running attack in which Allen accounts for 123 of the team’s combined 337 yards this season, and scored its only TD rushing.

RB Devin Singletary for getting involved as a receiver in finishing with a team-leading nine catches for 78 yards and a touchdown.

Backup center Greg Van Roten for mishandling several snap exchanges while filling in for injured starter Mitch Morse. A bad snap prevented Allen from spiking the ball to close the first half, with Buffalo in position to attempt a field goal at the Miami 34.

Allen said he was fine after having tests on his right throwing hand. ... RT Spencer Brown was sidelined by heat exhaustion. ... RG Ryan Bates did not finish because of a concussion. ... S Jordan Poyer (foot), CB Dan Jackson (neck), DT Ed Oliver (ankle), DT Jordan Phillips (hamstring) did not play, and their status remains uncertain.

21-18 — Allen’s record when committing a turnover. He lost a fumble against Miami.

Heal up and brace for a trip to play Lamar Jackson and the Baltimore Ravens (2-1), who have scored a NFL-leading 99 points entering Monday.