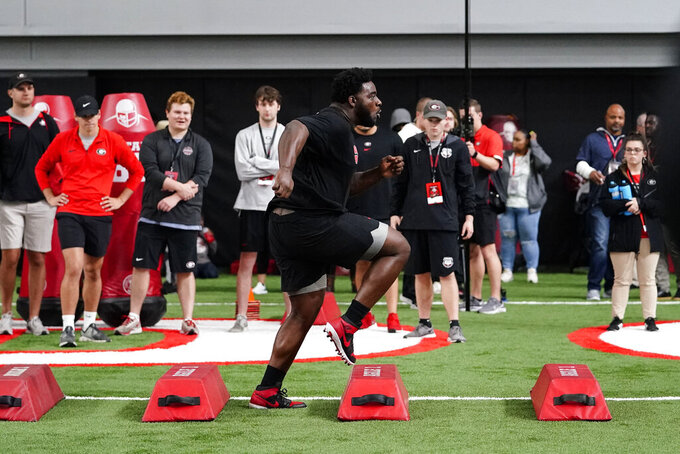 After Georgia sent 14 players to the NFL scouting combine in Indianapolis earlier this month, the most of any school, the talent was again on display on campus.

Georgia coach Kirby Smart said 122 NFL coaches, executives and scouts were on hand to see the players who led the Bulldogs to their first national championship since 1980. Smart said it was the biggest turnout by the NFL on a Pro Day at Georgia.

Smart said the group, led by defensive linemen Jordan Davis, Devonte Wyatt and Travon Walker, will be difficult to replace.

“I wish they could come back and play for us again but unfortunately they can’t, so I’m excited for them today,” Smart said.

Linebacker Nakobe Dean did not run the 40-yard dash at the combine or on Wednesday. Smart said Dean, the Butkus Award winner as the nation's top linebacker, strained a pectoral muscle on the bench press while preparing for the combine and chose to skip the 40. Dean participated in position drills.

Georgia's defensive linemen were stars at the NFL combine, impressing scouts with their speed.

Dean, Walker, Davis, Wyatt, outside linebacker Quay Walker, and safety Lewis Cine could be selected in the first two rounds of the NFL draft on April 28-30.