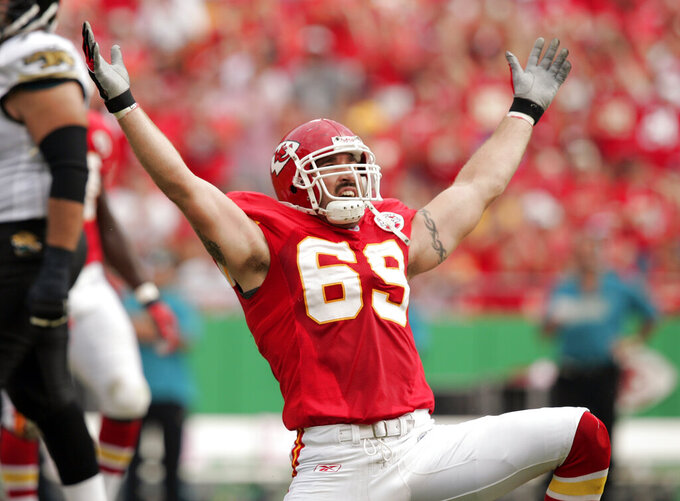 FILE -Kansas City Chiefs Jared Allen (69) celebrates a play against the Jacksonville Jaguars during the first quarter of a football game Sunday, Oct. 7, 2007 in Kansas City, Mo. Jared Allen is a finalist for the Pro Football Hall of Fame's class of 2022.(AP Photo/Dick Whipple, File) 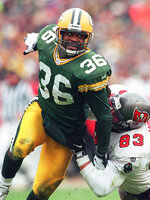 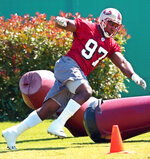 DeMarcus Ware, Andre Johnson and Devin Hester, all in their first year of eligibility, are finalists for the Pro Football Hall of Fame's class of 2022.

The 15 modern-day players who will be considered on Jan. 18 by the selection committee include tackle Tony Boselli, in his sixth year as a finalist, and defensive lineman Richard Seymour, in his fourth year.

A maximum of five modern-day players can be elected for enshrinement in August to the Canton, Ohio, hall. The inductees will be announced on Feb. 10 at NFL Honors, the prime-time TV program during which The Associated Press reveals its individual award winners for the 2021 season.

Three others — Dick Vermeil in the coaching category, Art McNally as a contributor, and Cliff Branch as a senior player — also are candidates for the class of 2022. Voting on each of those three will be held individually.

Hester is the rare finalist who made his mark mostly on special teams. He opened the 2007 Super Bowl for Chicago with a 92-yard kickoff return for a touchdown, the only time in Super Bowl history that has occurred. An All-Pro three times, Hester was a member of the NFL’s All-Decade Team of the 2010s and one of two return specialists on the NFL 100 All-Time Team.

Thomas, a five-time All-Pro, also was a regular on special teams, for Miami, and made his mark as one of the surest tacklers in football as an outstanding linebacker from 1996-2008, a golden era for the position.

Boselli has been part of a strong group of offensive linemen considered for the Hall of Fame in recent years. Kevin Mawae, Steve Hutchinson and Alan Faneca preceded the former Jaguars star into the hall. A three-time All-Pro, Boselli made the All-Decade Team of the 1990s despite playing only half the decade.

Like Boselli, Butler is in his 16th year of eligibility. The Packers' hard-hitting safety, a four-time All-Pro who also made the All-Decade Team of the 1990s, was among the most versatile defensive backs the game has seen.

The late Mills is under consideration in his 20th and final year of eligibility as a modern-day candidate. A three-time All-Pro who made his mark initially in the USFL, Mills then starred for the Saints and expansion Panthers — helping Carolina to the NFC championship game in its second season.

Anderson was considered one of the elite right tackles in the game for 13 pro seasons with Cincinnati and Baltimore, making three All-Pro squads.

Young's last season in 2007 was the first for Willis with the 49ers — and he won Defensive Rookie of the Year honors. A member of the NFL’s All-Decade Team of the 2010s, he was a five-time All-Pro.

Barber was one of the league's stingiest cover cornerbacks during his 26 seasons in Tampa, where he also played some safety. A key to the Cover-2 defensive scheme, Barber was a three-time All-Pro and a member of NFL’s All-Decade Team of the 2000s. He led the NFL with 10 interceptions in 2001 and won a Super Bowl the next season.