Humbled Vikings have plenty of work to do before playoffs 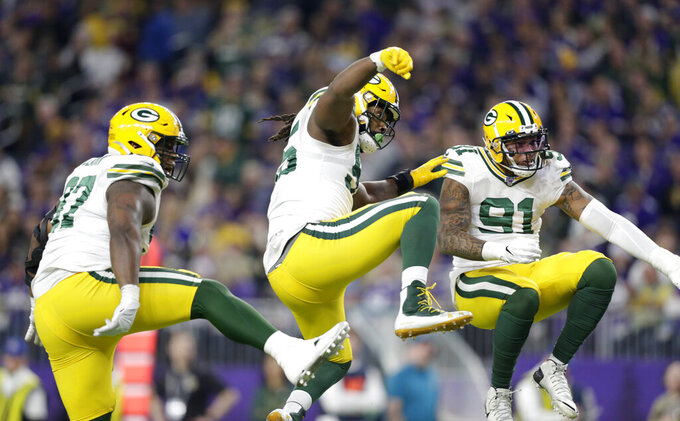 MINNEAPOLIS (AP) — Their spot in the playoffs conveniently clinched, the Minnesota Vikings were humbled by rival Green Bay in a way that suggested a short postseason stay.

As well as they've played in the majority of their games this year, with a cumulative scoring margin of plus-106 that's the second-best in the NFC, the Vikings have had plenty of vulnerabilities exposed against the best of the competition.

Their 23-10 loss at home to the Packers on Monday night was the latest example, dropping them to 1-4 against teams currently with a winning record. Last season, they were 1-6 in games against opponents that finished above the even mark.

“Certainly the Packers beat us tonight, and so we've got to go back and look at how, why, and certainly the answers to those questions in theory should be of some help going forward, not just if we play them again, but in general,” quarterback Kirk Cousins said. “So we'll have to study that, and that would be the silver lining, is just learning from the mistakes so that they get corrected, and that when big games are being played up ahead, they don't repeat themselves.”

The Vikings (10-5) could play the Packers in the first round of the playoffs, but New Orleans or Seattle are the more likely foes. Regardless if they can make a run or not, they'll be on the road the whole time.

“Offensively we didn't play as well as we can play, I'll say that, and defensively we could have played the run better,” coach Mike Zimmer said. “So there's a lot of things that we need to clean up.”

The Vikings were humbled while their biggest rival clinched the NFC North on their home turf. Packers linebacker Preston Smith, on his way into the jubilant locker room, mocked the “You like that?” mantra Cousins often shouted with Washington before coming to Minnesota last season. The Green Bay defense also did a group mimic of Vikings defensive end Danielle Hunter's customary karate-kick sack celebration.

The Packers had plenty to be happy about with their pass rush. The Vikings totaled 139 yards and seven first downs, both season lows by far.

Though the defense produced three turnovers in the first half, it slipped after that while letting running back Aaron Jones get loose and quarterback Aaron Rodgers get more comfortable. Of course, the time-of-possession advantage the Packers had (37:32 to 22:28) was a significant factor.

“It doesn't matter who you are, that'll wear you out,” Rodgers said.

After such a rough game for the offense, it's only natural that the punter would stand out. Britton Colquitt, who was signed right before the regular season began and has helped kicker Dan Bailey find a rhythm with his proven holding ability, had eight punts for a net average of 47.1 yards and a long of 56 yards to at least give the defense more cushion to work with.

Cousins has had a career-best season under the direction of offensive coordinator Kevin Stefanski and offensive adviser Gary Kubiak, largely thriving in a system that favors multiple tight ends and play-action, roll-out and screen passes. For the second time this season, the Packers schemed those pillars right out of the game plan.

Cousins was frequently in the shotgun formation out of necessity, and he took five sacks after going down behind the line of scrimmage only once over the previous three games. When opponents have the pass-rush skill and play-calling acumen to do this, Cousins needs to be able to find ways to get the ball down the field more quickly, and not just settle for safe dump-offs to fullback C.J. Ham. The two lowest passer ratings for Cousins in his 31 games with the Vikings have been this season against the Packers.

Free safety Anthony Harris had another standout performance, darting in front of Davante Adams for the first interception of Rodgers in 278 attempts and nine games. Harris, who also had three tackles and two passes defended, is tied for the NFL lead with six interceptions. That's the most by a Vikings player since Darren Sharper had nine picks in 2005.

Left tackle Riley Reiff was beaten often by Packers outside linebacker Za'Darius Smith, whom the Packers deftly moved around for 3 1/2 sacks and five tackles for loss. Smith overtook right guard Josh Kline, right tackle Brian O'Neill and even center Garrett Bradbury at times, too, but the Vikings need Reiff, their highest-paid blocker and a team captain who was putting together a decent season to date, to be able to better control the opponent's top pass rusher.

With the Vikings locked in as the sixth seed for the playoffs, running back Dalvin Cook is all but assured to get another game off to rest his shoulder after his first absence of 2019 came against the Packers. Cook's backup, Alexander Mattison, missed his second consecutive game with an ankle injury. The heart of the defense is hurt, too. Linebackers Eric Kendricks (quadriceps, second quarter) and Anthony Barr (hamstring, fourth quarter) each left the game, and their absence was felt down the stretch.

2.62 — That was the paltry average yards per play for the Vikings on Monday, the third-lowest mark in an NFL game this season, according to SportRadar. The New York Jets were responsible for the only two worse.

Getting the running backs and linebackers healthy will be the most critical task for the next two weeks. Re-establishing a winning identity, even in a meaningless game against Chicago on Sunday, will be important, too. Offensive coordinator Kevin Stefanski and the rest of the staff must find some more antidotes to the way Green Bay stifled Cousins and overwhelmed the offensive line.