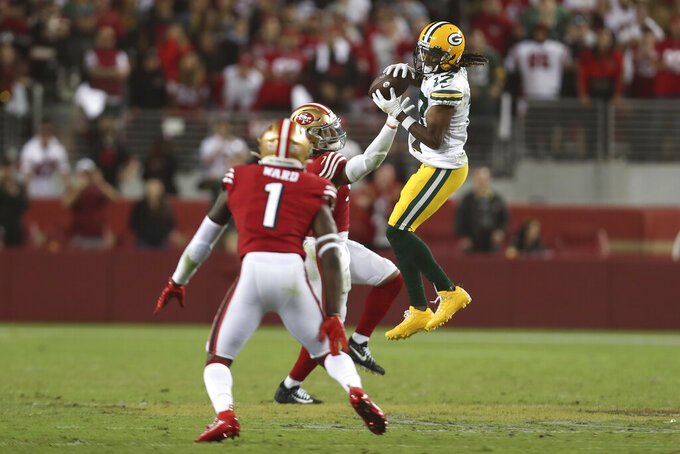 SANTA CLARA, Calif. (AP) — The mounting injuries at running back and cornerback finally caught up to the San Francisco 49ers in their last second-loss to the Green Bay Packers.

With four of their top five halfbacks sidelined with injuries and three key cornerbacks down, the Niners struggled to generate much on the ground or slow down Aaron Rodgers and Davante Adams in a 30-28 loss Sunday night.

Some of those injury issues will linger for much longer, meaning the 49ers (2-1) will need to find some answers to solve those problems.

“There’s too many times where we hurt ourselves just in some situational stuff,” coach Kyle Shanahan said Monday. “I thought we gave them too many opportunities and that’s why we didn’t have enough to overcome it at the end.”

San Francisco lost starting cornerback Jason Verrett to a season-ending knee injury and then lost Josh Norman (bruised lung) and K'Waun Williams (strained calf) in the first half against the Packers.

The coverage issues negated the significant advantage the Niners had up front as Green Bay slowed down Nick Bosa with some chip blocks after he dominated two games in the 2019 season and Rodgers got rid of the ball in a lightning quick average of 2.04 seconds per drop back, according to Pro Football Focus.

“I think that they definitely didn’t want it to go like it did in 2019,” Bosa said. "They made adjustments and didn’t give us as many opportunities. But when we did have opportunities, we just didn’t capitalize.”

The running game also didn't get going, finishing with 67 yards on 21 carries. With Raheem Mostert out for the season, Jeff Wilson Jr. on the physically unable to perform list, Jamycal Hasty on injured reserve and Elijah Mitchell out with a shoulder injury, Shanahan had confidence in only one halfback.

Rookie Trey Sermon had 10 carries for 31 yards and was the only halfback to get an offensive snap. Fullback Kyle Juszczyk had five carries and Shanahan also utilized receivers and tight ends on run plays.

Special teams. Trenton Cannon provided a spark with a 68-yard kickoff return that set up San Francisco's first score late in the second quarter. Punter Mitch Wishnowsky had another big day, averaging 53.3 yards on his four punts with three downed inside the 20. Wishnowsky has had a league-best 72.7% of his punts end inside the 20.

Slow starts. For the second straight game the Niners were outgained by more than 100 yards in the first quarter. But after mistakes by the Eagles kept the game close and San Francisco only trailed 3-0 before getting going two weeks ago, the Niners got into a 17-0 hole against the Packers. San Francisco has been outgained by a league-worst 262 yards in the first quarter and has scored just once.

“We’ve got to take a long, long look in the mirror as an offense and just what we could do better, how we could start faster,” quarterback Jimmy Garoppolo said. "There was just one mistake here, one mistake there by guys, starting with myself, and if we eliminate just half of those, it’ll lead to better football early and we won’t have to play from behind the eight ball like we were tonight.”

WR Brandon Aiyuk. After getting no targets in the opener and just two in the second game, Aiyuk took on a much bigger role Sunday. While his numbers weren't big with four catches for 37 yards, an 8-yard carry and one TD, it's a good sign that the second-year player will return to the form he had as a rookie last year.

C Alex Mack. The veteran center struggled on some shotgun snaps and couldn't control the interior of Green Bay's defensive front. That played a role in the poor running game and held back the offense.

Shanahan said Williams will be out for “a while.” ... Norman is day to day after being hospitalized with a bruised lung. ... TE George Kittle (calf soreness) is day to day. ... Mitchell could return this week.... DT Maurice Hurst and CB Davontae Harris are expected to be back at practice this week after being on IR the past three weeks.

37. The Niners took the lead with 37 seconds left, but allowed Rodgers to drive the Packers to the game-winning field goal. San Francisco had been 20-0 since 2000 when protecting a one-score lead when the opponent starts a drive in the final minute.

San Francisco hosts Seattle on Sunday in its first division matchup of the season.