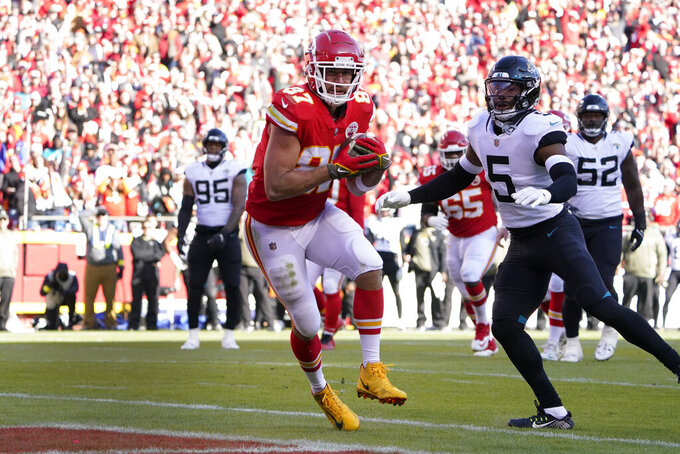 JACKSONVILLE, Fla. (AP) — Jacksonville’s defense was supposed to be better than this. A unit filled with early-round picks and high-priced free agents was expected to be the strength of the team, a crutch of sorts while second-year pro Trevor Lawrence finds his way in a new offense and with several new receivers.

Now, though, Jacksonville’s D might as well stand for disappointment.

The Jaguars (3-7) are coming off their worst defensive performance of the season, allowing 486 yards in a 27-17 loss at AFC powerhouse Kansas City. The outcome was hardly surprising, but the way it unfolded has become an all-too-familiar sight in Jacksonville: No pass rush. Blown assignments. Mental errors. Big plays.

“It’s a team sport, so you can’t really point fingers at whoever,” veteran safety Rayshawn Jenkins said. “I would definitely say that we can tighten the screws a bit as a unit, just settle down and really be on every detail of the game.”

Jacksonville has dropped six of seven games heading into its bye week. Although first-year Jaguars coach Doug Pederson cut his players loose for most of the week, he hopes the extra downtime will pay dividends when they return to face a daunting stretch that begins with a home game against Baltimore (6-3) followed by four of the next five on the road.

The only chance Jacksonville has of improving its already-slim hopes of winning the AFC South rest with the defense stepping up. It starts up front, where edge rusher Josh Allen has been mostly missing. Allen has gone six games without a sack — one shy of his career-long skid — and has managed a meager four quarterback hits during that span.

He’s hardly the team’s only issue on that side of the ball:

— Inside linebacker Devin Lloyd, the NFL rookie of the month in September, was benched in consecutive games and could see fellow rookie Chad Muma take over more of the snaps.

— No. 1 overall draft pick Travon Walker has been inconsistent at best. He has 2 1/2 sacks and more roughing-the-passer penalties (two) than memorable plays.

— Cornerback Shaquill Griffin, the highest-paid player on the team, was burned repeatedly early in the year and is now on injured reserve with a back issue.

“We can come up with some good answers for our players as to why some of the things are happening, and that’s sort of what the bye is designed to do,” Pederson said.

The Jaguars rank 27th in the league with 16 sacks. And considering what Jacksonville spent to upgrade its front — signing defensive tackle Foley Fatukasi, linebacker Foye Oluokun and pass rusher Arden Key to deals totaling more than $75 million in free agency and then drafting Walker, Lloyd and Muma in the top three rounds — the results have been far from ideal.

Allen has been nearly nonexistent since notching nine quarterback hits in the first four games, and he has looked downright uncomfortable in pass coverage.

“He understands that he needs to get going,” Pederson said. “He knows that. Conversations that he’s had with the staff, on defense, and knowing that he’s a big part of that rush. He’s talented, too talented not to get there and just got to make sure that he stays focused in and locked in on the rush plan and sticking to the technique that has made him a good pass rusher in this league.”

Allen’s not getting much help, either. Interior guys alongside Fatukasi, like Roy Robertson-Harris and DaVon Hamilton, have struggled at times. And the back-end coverage hasn’t been good enough to hold up without a steadier pass rush.

The result: Jacksonville has allowed 10 pass plays gaining at least 25 yards in its last five games.

“We need to fix just being more consistent,” Jenkins said. “The consistency is not there. As a unit, we make a lot of good plays, and you see a lot of flashes throughout most of the game. When we get to those times where we really need everyone to really be on their stuff, everyone needs to be conscious of that moment right there.”