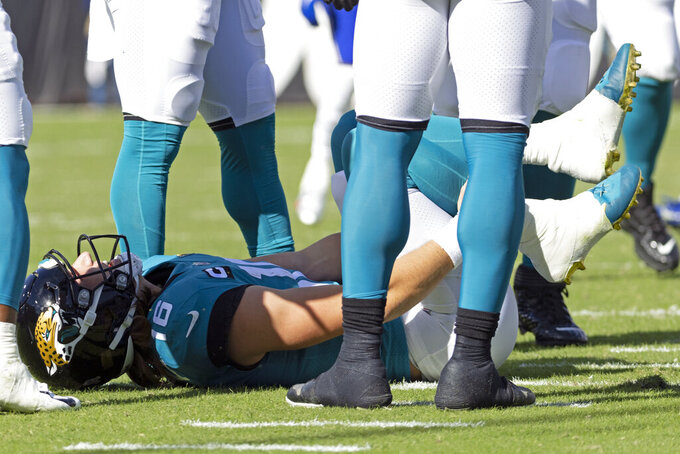 Jacksonville Jaguars quarterback Trevor Lawrence lies on the field after he was injured in a play during the first half of an NFL football game against the Buffalo Bills, Sunday, Nov. 7, 2021, in Jacksonville, Fla. (AP Photo/Stephen B. Morton)

The Jacksonville Jaguars overcome a huge scare to rookie quarterback Trevor Lawrence during their 9-6 upset of the Buffalo Bills on Sunday.

Lawrence, the first overall pick in the 2021 draft, was helped to the locker room for X-rays on his right ankle after getting stepped on in the second quarter. But he returned a few plays later, much to the relief of the Jags, who won just their second game.

Rookie left tackle Walker Little, making his first start in place of Cam Robinson (back), was pushed into Lawrence and stepped on him during a passing play. Lawrence tried to put weight on his ankle and couldn’t. Trainers helped him straight to the locker room before he returned.

The Dallas Cowboys’ No. 1 offense was stymied in a 30-16 loss to Denver, and running back Ezekiel Elliott appeared slowed by a right knee injury that has bothered him this season. He limped off after one of his 10 carries and went to the sideline again a play after taking a screen pass 21 yards.

Elliott was still playing with the game out of reach late. He finished with 51 yards rushing.

Denver’s Tim Patrick had four catches for 84 yards before he was helped off late in the third quarter. Defensive tackle McTelvin Agim didn’t return after injuring a knee and first-round draft pick Pat Surtain II injured a knee.

The AFC North-leading Baltimore Ravens learned after their 34-31 overtime win over the Minnesota Vikings that safety DeShon Elliott will likely be out for the rest of season with an injury to his pectoral/bicep area.

Baltimore was without wide receiver Sammy Watkins (thigh) and running back Latavius Murray (ankle), and defensive tackle Justin Madubuike was shaken up late in the fourth quarter.

Minnesota was missing defensive tackle Michael Pierce (elbow), and cornerback Bashaud Breeland went down in the second quarter with a groin injury. The Vikings put safety Harrison Smith on the reserve/COVID-19 list before the game, and coach Mike Zimmer said he’ll likely be out next week too.

Browns cornerback Greedy Williams went out with a right shoulder injury early and didn’t return in Cleveland’s 41-16 rout of Cincinnati. He missed all of 2020 with a nerve issue in the same shoulder.

Bengals returner/safety Brandon Wilson was carted off the field with a left knee injury suffered on a runback in the second quarter. Linebacker Akeem Davis-Gaither didn’t play in the second half after hurting his left knee.

Patriots running backs Damien Harris and Rhamondre Stevenson, and wide receiver Gunner Olszewski left a 24-6 victory against Carolina with head injuries and did not return. Harris’ injury came in the fourth quarter with the game out of hand. Tight end Jonnu Smith injured his shoulder in the second half.

A person with knowledge of the situation said Panthers starting center Matt Paradis tore the ACL in his left knee on the second play of the game and will miss the remainder of the season. The person spoke to The Associated Press condition of anonymity because the Panthers have not announced the status of the injury.