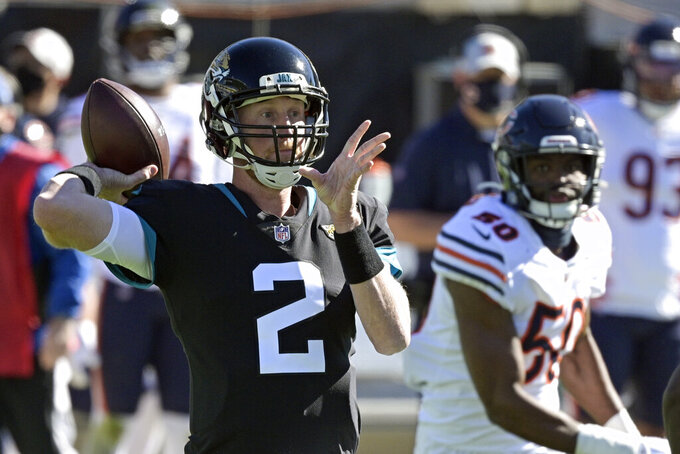 Jacksonville Jaguars quarterback Mike Glennon (2) throws a pass as he is rushed by Chicago Bears linebacker Barkevious Mingo (50) during the first half of an NFL football game, Sunday, Dec. 27, 2020, in Jacksonville, Fla. (AP Photo/Phelan M. Ebenhack)

JACKSONVILLE, Fla. (AP) — The Jacksonville Jaguars seemingly locked up No. 16 in Week 16.

It was winning by losing, and it was 14 games in the making.

Getting the opportunity to draft Clemson star quarterback Trevor Lawrence became as close to a reality as possible for the small-market team that’s spent the better part of two decades searching for a franchise QB. The potential game-changing moment came on the same day the Jaguars reached a new low for losing.

Mitchell Trubisky accounted for three scores, including two TD passes to Jimmy Graham, and Chicago pounded Jacksonville 41-17 Sunday. The game meant as much to the Jaguars’ long-term future as it did in the short term to Chicago, which is chasing a playoff spot.

The Jaguars (1-14) set a franchise record by losing their 14th consecutive game and locked up the top pick for the first time when the New York Jets beat Cleveland 23-16 a few minutes later.

The mood for the team’s home finale was obvious from the outset: Jaguars fans cheered for the Bears early and often.

“I don’t really think about it,” Jaguars coach Doug Marrone said. “I think in this time, the time that we’re in right now with COVID, a lot of these fans don’t get a chance to see their team play. … I think they’re probably happening for a lot of these teams that are letting people into the stadium, so I don’t look at it as a big thing, negative or distracting for us.

“Our focus is on the field and trying to win football games. But that’s fine.”

The Jaguars showed little fight in the second half, allowing 28 straight points that turned a close game into a rout. Chicago was up 41-10 when backup quarterback Nick Foles got a chance to close out the game against his former team.

Jacksonville ended up losing for the 22nd time in its last 25 games, a stunning skid that already cost personnel chief Tom Coughlin and general manager Dave Caldwell their jobs.

Marrone could be next.

“We go out there and we’re fighting hard and then all of a sudden we just can’t sustain it when you look out on the field,” Marrone said. “There’s opportunities there.”

Not even the Jaguars could screw it up now. The franchise that drafted quarterbacks Byron Leftwich, Blaine Gabbert and Blake Bortles, took Leonard Fournette over Patrick Mahomes and Deshaun Watson, and doubled down on Gardner Minshew, has no chance of slipping to the No. 2 spot heading into the season finale at Indianapolis.

“We have one more game left,” Marrone said. “Like I told the team, I told them after the game, ‘2020’s been (stinky). We all know that. But the way I look at it is we have ourselves a game starting in 2021, so let’s make this change. Let’s just change this thing.’

“I think these guys care about each other in the locker room. They’re consoling each other. It’s difficult, but again, you’re not getting a lot of people pointing fingers. You’re not getting people that want to take themselves out of the game. You’re getting guys that are going in there and trying. We’re just not making plays, and at the end of the day, we’re not playing well enough. That’s on all of us.”