Jaguars take huge step back after showing signs of progress 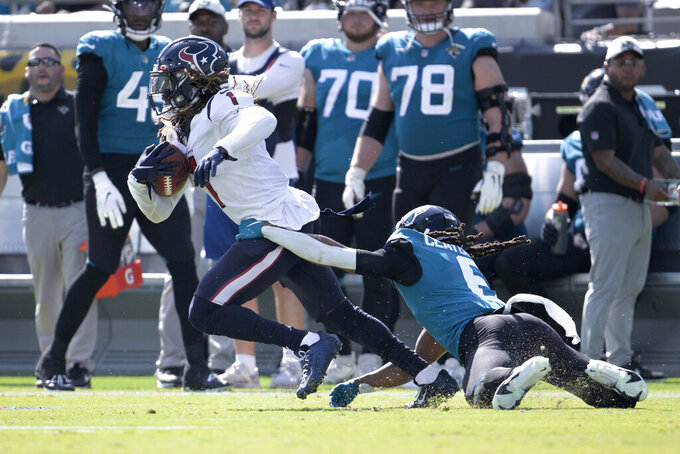 JACKSONVILLE, Fla. (AP) — The Jacksonville Jaguars may have flushed four weeks of progress in four quarters against rival Houston.

Lackluster effort, boneheaded decisions, costly turnovers and dropped passes. It was the kind of performance everyone has grown accustomed to seeing from the Jaguars for the past decade or more.

Even the future of the franchise — quarterback Trevor Lawrence and pass rusher Travon Walker — made head-scratching mistakes reminiscent of former failed regimes.

Will it have a carryover effect when the Jaguars (2-3) play at Indianapolis (2-2-1) on Sunday?

“This game meant a lot at this moment. But now this moment is done, and we have another big moment ahead,” linebacker Josh Allen said. “Just don’t make it two.”

Against the previously winless Texans, Jacksonville looked more like a team that’s endured double-digit losses in 10 of the past 11 seasons than one ready to contend for a division title or a playoff berth.

Two crucial, second-half errors were the Jaguars’ undoing in their ninth straight loss to Houston (1-3-1).

Lawrence threw perhaps the worst interception of his career on a second-and-1 play from the Houston 7-yard line. Rookie cornerback Derek Stingley Jr. barely had to move to catch the ball, erasing Jacksonville’s best chance for a touchdown.

Walker’s fourth-quarter gaffe was equally troubling. He tossed Texans quarterback Davis Mills to the ground long after the whistle, drawing a 15-yard penalty for unnecessary roughness and turning a third-and-20 play into a new set of downs. Houston found the end zone seven plays later, just after rookie Dameon Pierce’s 20-yard run in which he broke tackles by more than half of Jacksonville’s defenders.

“You just go back to work,” coach Doug Pederson said. “You entrust these guys with a lot. We ask a lot of them. You just keep working. You keep putting them in these situations, and they’re going to learn. We’re all going to learn together, and we’ll be stronger and better for it.”

Defense has given Jacksonville a chance in consecutive losses. The Jaguars forced six punts, allowed 248 yards and even gave Lawrence & Co. the ball back twice in the final three minutes while trailing by a touchdown.

The unit stiffened near the goal line the previous week at Philadelphia, forcing a short field goal, stopping a 2-point conversion and forcing a turnover on downs — all in the fourth quarter — to keep it a one-possession game.

The Jaguars needed to be more committed to running the football.

James Robinson and Travis Etienne combined to carry just seven times for 11 yards in the second half of a close game. The duo ran for 87 yards on 13 attempts in the opening 20 minutes.

Jacksonville finished with nearly twice as many passes (47) as runs (26).

“That’s on me. Got to call more runs,” Pederson said.

Etienne had his best game as a pro. He finished with 114 total yards — 71 rushing and 43 receiving. He also dropped a pass. Still, he played 10 more snaps than Robinson and showed why he’s considered one of the team’s top playmakers with a 30-yard run and a 20-yard reception.

Christian Kirk, a high-priced free agent who had 18 catches and three touchdowns in Jacksonville’s first three games, has cooled considerably the past two weeks. He had one catch for 5 yards a week after dropping three passes at Philly and finishing with two receptions for 60 yards.

Left guard Ben Bartch and backup linebacker K’Lavon Chaisson sustained knee injuries that were being further evaluated Monday. Defensive tackle Foley Fatukasi (quadriceps) was inactive against the Texans, but could return to practice this week.

4 — number of consecutive losses by the Jaguars in Indy. Jacksonville has dropped eight of nine at Lucas Oil Stadium.

The Jaguars are looking to sweep the Colts for the first time since 2014. But neither team looks as it did in the first meeting: a 24-0 shutout a little more than three weeks ago.