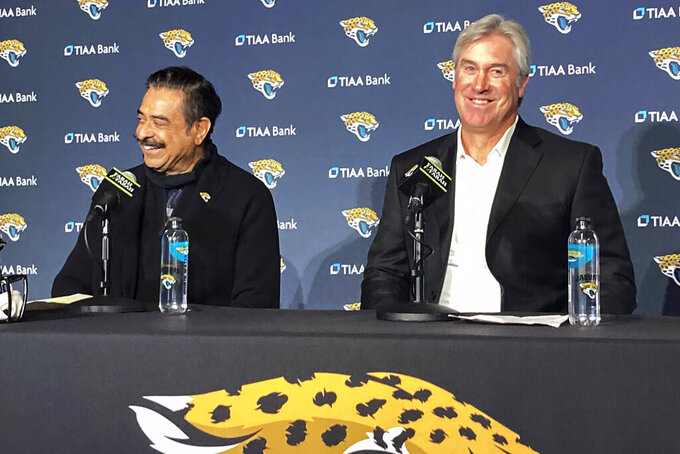 JACKSONVILLE, Fla. (AP) — Doug Pederson won’t have the power Urban Meyer had with the Jacksonville Jaguars. The team and its fans can only hope that's a good thing.

Owner Shad Khan introduced Pederson as the Jaguars' coach on Saturday and said the team has applied to the NFL to hire an executive vice president, a person who would report directly to Khan and oversee Pederson and general manager Trent Baalke.

It’s a much different structure from what the Jaguars employed the last two years. Khan’s only other EVP was two-time Super Bowl-winning coach Tom Coughlin, who held the job for three seasons (2017-19) and was in place when Jacksonville last made the playoffs.

Khan went with a traditional coach-GM (Doug Marrone-Dave Caldwell) model in 2020 after Coughlin was fired and then hired Meyer to head a coach-centric model in 2021, a setup that ended in less-than-desirable fashion. Meyer was fired in mid-December after 13 games, one of the most turbulent tenures in NFL history.

“One of the reasons we had the search was not only looking for the head coaching candidate but really to learn about other organizations,” Khan said. “I mean, that’s a byproduct of the coaching search.

“So some of the practices, some of the structure that works, we got a great insight into it. So strengthening the football operations, more staff, definitely, that’s part of our goal. We’ve had too flat an organization, and we want to add brainpower and more people to strengthen that.”

Khan plans to hire an EVP as well as an assistant general manager to work under Baalke, who came under fire in recent months after Khan opted to keep him instead of cleaning house. The Jags already interviewed former Minnesota GM Rick Spielman, who could end up filling either spot. Under NFL rules, Jacksonville must also interview two external minority candidates for the EVP job.

“This question is asked in 32 buildings across the league: Who has power? Who’s the final decision-maker?” he said. “Show me one building where you’re not collaborative and you’re winning. It just doesn’t happen in the National Football League.”

Jacksonville hired Pederson on Thursday, coming to terms five weeks after the team first interviewed the former Philadelphia Eagles coach. Pederson was one of 10 candidates interviewed in what Khan called an “exhaustive process with no preconceived notions.”

Pederson was one of two who got a second interview. Tampa Bay offensive coordinator Byron Leftwich was the other.

The 54-year-old Pederson was widely considered one of the top options. He made the playoffs three times in five seasons in Philadelphia and led the Eagles to their first Super Bowl victory following the 2017 season. He opted to take a year off after getting fired at the end of the 2020 season and moved to Jupiter, about a four-hour drive south on Interstate 95.

During his time away, Pederson witnessed the oldest of his three sons get married, reconnected with his wife and was able to spend time with his brother before he died of cancer.

“I knew still in my heart of hearts that I did want to coach and still be a head coach in this league and still be successful,” Pederson said. “That never left. I just needed the time to kind of just step away and kind of gather myself a little bit. …

“Did I miss football? Yeah, I did. That’s why I went and visited some guys in training camp last year. I just needed that fix of football and to be around it. As the season progressed and I’m watching the entire league, I guess those football competitive juices (came) back.”

He also interviewed with Chicago and New Orleans before landing in Jacksonville. One thing that stood out about this job: having Trevor Lawrence as his franchise quarterback.

“It is unfortunate that things didn’t go necessarily smoothly this past year, but that’s behind us now,” Pederson said. “I’m just excited to come in here, roll up my sleeves, go to work, create a system that enhances his skill set and be successful. I pride myself in that.

“We did it in my former place with Carson Wentz early in his career and I really feel like that’s a strength that I can help and be a part of that.”