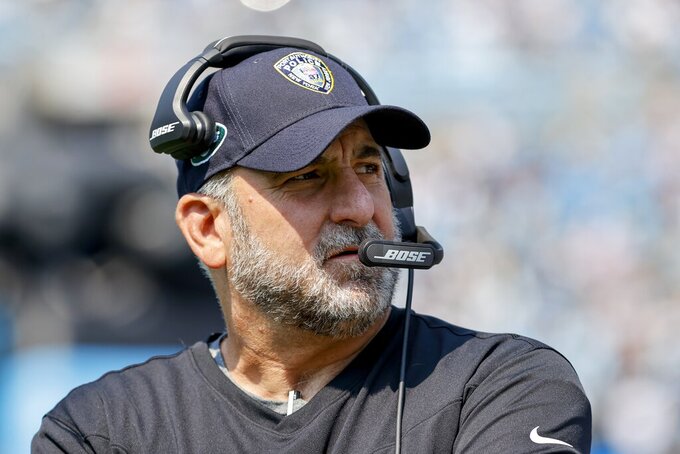 FILE - John Benton stands on the sidelines before an NFL football game against the Carolina Panthers, Sunday, Sept. 12, 2021, in Charlotte, N.C. Benton, the New York Jets offensive line coach, was pulled over by the New Jersey State Police, late Thursday, March 17, 2022, and charged with driving under the influence. (AP Photo/Nell Redmond, File)

NEW YORK (AP) — Jets assistant coach John Benton was arrested and charged with driving under the influence in New Jersey after being pulled over for a vehicle violation, police said.

Benton was suspected of being under the influence late Thursday while driving a Lincoln Navigator in Morris County, New Jersey State Police Sgt. Alejandro Goez said.

A New York Jets spokesperson said "We are aware of the situation and have no further comment.”

It wasn’t immediately clear whether Benton had hired an attorney.

Benton has been an NFL assistant since 2003, when he began his pro career as the St. Louis Rams’ offensive line coach. He has also served as an assistant in Houston, Miami, Jacksonville and San Francisco. Benton came to the Jets last season to join head coach Robert Saleh’s staff after they spent four years coaching together as assistants with the 49ers.

Benton began his coaching career in 1987 at Colorado State, his alma mater, spending 11 years there during two stints. He also was at California University in Pennsylvania for five years.