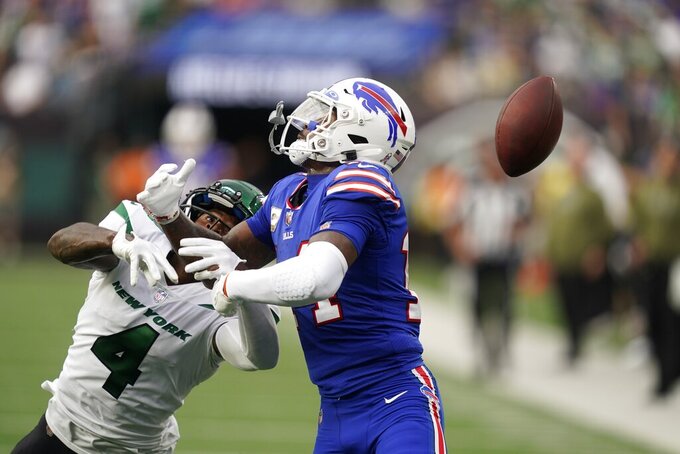 And he can laugh about it now. Especially since he eventually got it right.

The New York Jets coach was San Francisco's defensive coordinator when the 49ers drafted D.J. Reed in the fifth round out of Kansas State in 2018.

Saleh loved Reed's overall ability and approach, but had him miscast. It wasn't until Reed went to Seattle two years later that he found his perfect fit.

“I screwed that one up because we tried to make D.J. a nickel free safety, and credit to Seattle — they put him at corner,” Saleh recalled Wednesday. "And he’s flourished at that position, but the mindset's still there — the tenacity, the intensity, the strain — all of it is still there.

“He’s really found his home at the corner in that right spot, and I’m thankful he’s here.”

So are the rest of the Jets, whose cornerback duo of Reed and rookie Sauce Gardner has been one of the NFL's best during New York's 7-4 start. They have routinely shut down opposing receivers, transforming one of New York's weaknesses a year ago into one of its biggest strengths.

Reed and Gardner will be tested again Sunday when they take on the Vikings in Minnesota, which has perhaps the league's top wide receiver in Justin Jefferson.

“It’s going to be fun,” Saleh said. "Sauce is the ultimate strainer. Him and D.J., they strain, and they play very, very, very hard. Not to say they haven’t played anyone that plays hard, but I’ll put our guys up against anybody.

“Now those guys are freaking good now, and it’s going to be a great challenge. But like I said, I think it’s a challenge that our guys are excited for.”

Reed might see the bulk of snaps against Jefferson, depending on where the star receiver lines up. Saleh and defensive coordinator Jeff Ulbrich don't necessarily have Reed and Gardner follow one particular receiver throughout games.

“When you've got two dominant corners, you don't really need to be stressing about anything,” Gardner said.

That said, both are preparing to face Jefferson — along with the rest of the Vikings' pass catchers.

“He's a pretty good receiver,” Gardner said of Jefferson, whose 81 catches are third in the league and his 1,232 yards receiving are just one short of NFL leader Tyreek Hill. “He runs good routes and his play speaks for itself.”

Same for Gardner, the No. 4 overall pick in April whose 14 passes defensed are the most in the league. He has two interceptions and his 88.9 coverage grade from Pro Football Focus leads NFL defensive backs.

As of Tuesday, he also led AFC cornerbacks in voting for the Pro Bowl — a rarity for a rookie at that position.

“I’m a naturally humble guy, but a lot of you asked me like what my individual goals were and that was one of them," he said. "I know it’s not too often that rookies make the Pro Bowl, but at the same time, I know that the job's not finished yet. So I'm just going to keep my head down and keep going.”

When asked if he thought he deserved the accolades, Gardner paused for only a moment.

Gardner's instant impact has somewhat overshadowed what Reed has done in his first season since signing a three-year, $33 million contract with the Jets in the offseason. He has 54 tackles, an interception, seven passes defensed and a forced fumble.

Reed has also allowed a league-low 65 yards after the catch this season among cornerbacks with a minimum of 400 snaps.

Reed and Gardner also play off each other in the secondary, pushing each other to be great. And that has helped turn the Jets' defense into a force, ranked fifth overall and fourth in scoring.