Jets rookie running back Breece Hall out with knee injury 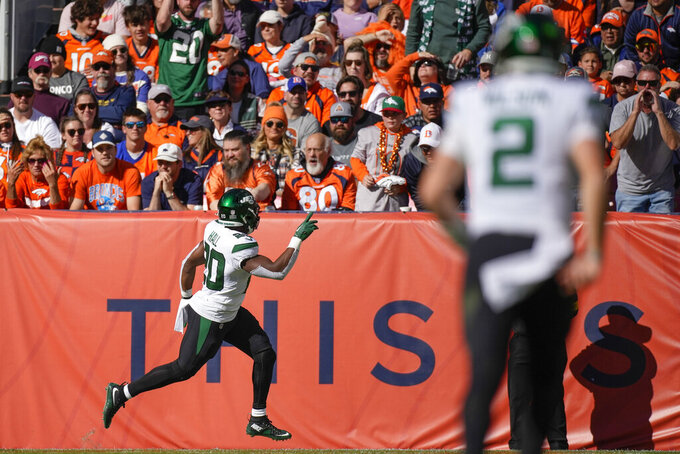 New York Jets running back Breece Hall (20) celebrates his touchdown in the end zone against the Denver Broncos during the first half of an NFL football game, Sunday, Oct. 23, 2022, in Denver. (AP Photo/David Zalubowski)

DENVER (AP) — New York Jets rookie running back Breece Hall was ruled out after being helped off the field late in the second quarter with a knee injury.

Hall was hurt on a tackle Sunday between Broncos defenders Pat Surtain II and Jonas Griffith. Hall immediately went into the medical tent. He began walking toward the locker room with trainers before being carted from the sideline.

The second-round pick out of Iowa State turned in the game's biggest play, a 62-yard touchdown scamper in the first quarter. According to Next Gen Stats, Hall reached 21.87 mph on the run.

He had four carries for 72 yards before leaving. Hall entered the game with 609 yards from scrimmage, the most by any Jets player in the team’s first six games since Curtis Martin in 2004.

The Jets also announced in the third quarter that right tackle Alijah Vera-Tucker (elbow) was ruled out. Wide receiver Corey Davis (knee) was questionable to return.