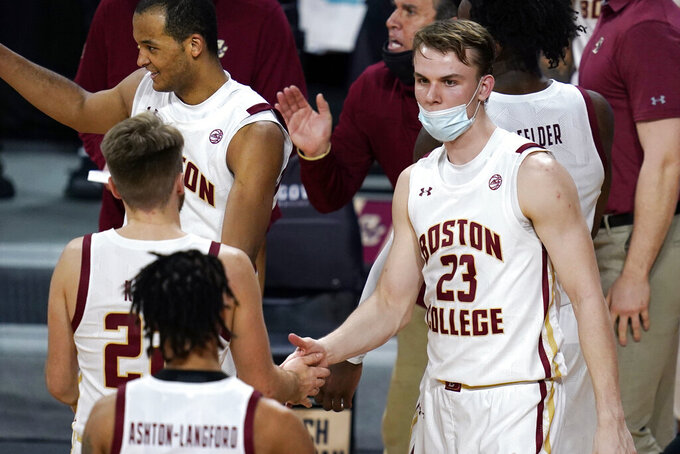 Boston College forward Andrew Kenny (23), who joined the team as a walk-on, congratulates teammates during the second half of an NCAA college basketball game against Wake Forest, Wednesday, Feb. 10, 2021, in Boston. With COVID-19 protocols limiting Boston College to six scholarship players for its games against North Carolina State and Wake Forest, the Eagles relied on walk-ons to fill out their bench. Kenny had two rebounds in the six minutes he played against Wake Forest. (AP Photo/Charles Krupa)

The Boston College men’s basketball game at Georgia Tech scheduled for Wednesday has been postponed. No makeup date has been announced.

The Atlantic Coast Conference said the postponement was due to the continued quarantines and contact tracing within the Boston College program.

The postponement delays the debut of Scott Spinelli as the Eagles’ interim coach. The school fired coach Jim Christian on Monday. Athletic director Pat Kraft said Spinelli, who had been an assistant, will coach the remainder of the season. Boston College is 3-13 overall and 1-9 in the ACC.

The Philadelphia Flyers returned to practice in limited quantities after a weeklong shutdown because of the virus.

The Flyers had 16 players on the ice for practice. General manager Chuck Fletcher expects eight more to be cleared for practice Wednesday.

Philadelphia has seven players on the NHL's COVID-19 protocol list. Coach Alain Vigneault does not expect any of those players to play Thursday when the Flyers are scheduled to face the New York Rangers.

The Flyers are scheduled to face Boston on Sunday outdoors at Lake Tahoe as part of a league event. Fletcher said he has been in constant communication with deputy commissioner Bill Daly but never heard of the Lake Tahoe game against the Bruins being in danger.

The Milwaukee Bucks will start having a limited number of spectators at their home games beginning Tuesday night against the Toronto Raptors.

Bucks officials are phasing in the process by having only players’ families and invited guests at their next three games. They’ll have 250 spectators Tuesday, 500 for Thursday’s game with Toronto and 750 for Friday’s game with the Oklahoma City Thunder.

Members of the general public will be allowed to attend games starting Sunday when the Bucks face the Sacramento Kings.

The Milwaukee Health Department has approved that the Bucks only allow fans to fill 10% of Fiserv Forum’s seating capacity, which equates to about 1,800 spectators. Bucks officials are hoping that increases to 25% capacity during the second half of the season.

Spectators must wear face coverings at all times except when they’re eating or drinking. All tickets will be sold in pods of two or four seats to ensure social distancing. Fans won’t be allowed to bring in bags.

The third-ranked Cardinals’ game on Sunday was postponed after a positive COVID-19 test by a Tier 1 staff member. Louisville (19-1, 12-1) underwent subsequent quarantining and contact tracing and adhered to ACC medical protocols.

The Miami Open plans to allow 750 fans on the grounds per session for this year’s tennis tournament, and they’ll be allowed to watch matches on the showcase court.

Those matches will be played in the grandstand, which seats 5,000, meaning crowds there will be limited to 15% of capacity because of COVID-19 restrictions.

The tournament will again be held at the Miami Dolphins’ stadium site, where it moved in 2019. The event was canceled last year due to the pandemic. The stadium court for showcase matches in 2019 will not be used this year.

Total attendance for this year’s tournament is expected to be about 18,000. That’s less than 5% of the 2019 attendance total of 388,734 for an event that typically attracts most of the world’s top players.