The Latest: MLB's Reds cleared to welcome about 12,700 fans 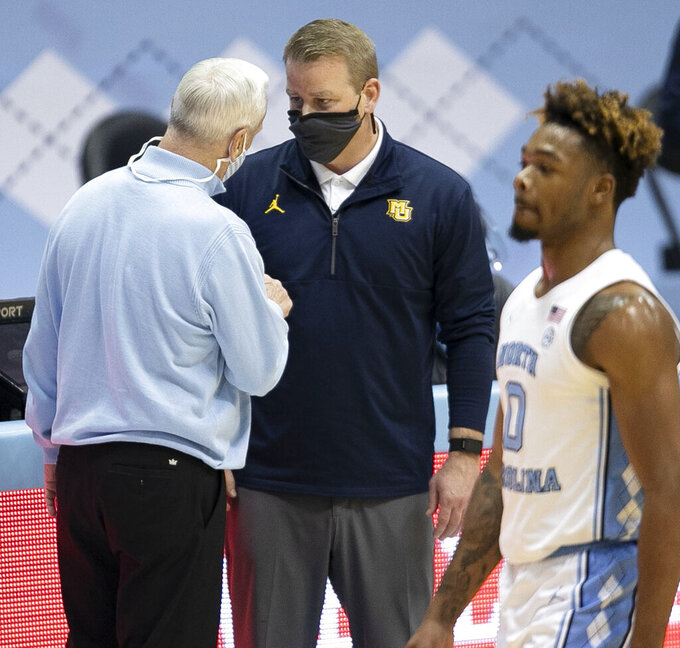 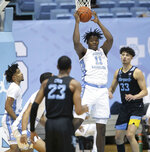 The Cincinnati Reds have been cleared to have around 12,700 fans at Great American Ball Park for games this year.

The team made the announcement Thursday after the state of Ohio said sports teams can allow up to 30% of capacity of their venues for games beginning April 1, which happens to be the day of the Reds opener against the St. Louis Cardinals.

Fans will be physically distanced and be required to wear masks. Ticketing will be all digital, and concession and merchandise stands will be cashless.

Regular-season games last year were played without fans because of COVID-19 restrictions.

The top-ranked Wisconsin women’s volleyball team is pausing all team-related activities for at least two weeks due to COVID-19 cases within the program.

Wisconsin has postponed its scheduled matches with Nebraska this weekend and at Iowa on March 5-6.

The school release announcing the decision didn’t specify the number of positive cases within Wisconsin’s program.

The San Jose Sharks say they have gotten no additional positive tests after placing forward Tomas Hertl on the COVID-19 list.

The NHL postponed the Sharks home game against Vegas on Thursday after Hertl went on the list. The players stayed away from the team’s practice facility other than to take tests for the coronavirus.

The Sharks say the NHL and NHLPA have approved for the team to resume practice Friday if there are no more negative tests before then. If that happens, they will play their scheduled home game on Saturday against St. Louis.

The NHL’s COVID-19 list is down to a season-low seven players after Philadelphia Flyers forward Jakub Voracek was cleared following a 14-day stint.

The Flyers are down to just three players in the COVID protocol after having as many as seven on the list as recently as Feb. 17.

Thursday marked the fourth consecutive day the list had a single-digit number of players, and down from a season-high 59 on Feb. 12.

The Buffalo Sabres will begin allowing about 2,000 fans to attend select home games starting next month.

The number of fans allowed follows New York state regulations in representing 10% of the team’s home arena’s capacity. All fans will be required to show proof they tested negative for COVID-19 within 72 hours before the opening faceoff.

The first game fans will be allowed to attend will be March 20, when Buffalo is scheduled to face the Boston Bruins.

Season-ticket holders will have the first opportunity to buy seats,. The Sabres say they will provide further details in the near future.

In a separate announcement, the Sabres’ American Hockey League affiliate in Rochester, New York, says it will continue playing without fans. The Rochester Americans say the decision was based on capacity restrictions and logistical challenges.

The easing of public-gathering restrictions in North Carolina has opened the door for a limited number of fans to attend the Atlantic Coast Conference men’s and women’s basketball tournaments.

The league announced its decision Thursday, a day after Gov. Roy Cooper eased restrictions to allow attendance of up to 15% of indoor arenas seating more than 5,000 and 30% of outdoor venues.

The ACC had previously said it wouldn’t have public tickets available for either tournament taking place in Greensboro. The league is finalizing plans for how the ticket availability will work.

Also on Thursday, ACC member North Carolina said it will have limited fan attendance at its final two men’s basketball games as well as contests in spring sports.

The Tar Heels host No. 11 Florida State on Saturday and then rival Duke the following weekend. The plan is for students to have access to about 75% of available tickets (2,400) through a lottery system, while other tickets will be available to family members of coaches and players, health-care workers from UNC Hospitals and some UNC athletics donors.

In an open letter to fans, athletics director Bubba Cunningham says the school will require safety measures such as wearing masks and social distancing.

The Southeastern Conference has set its lineup for the final weekend of league play.

The league will have six games on Saturday, March 6 and one the next day. The SEC had left that weekend open for makeup games. Five games are rescheduled from postponements due to COVID-19 while two are new matchups.

Alabama’s game at Georgia on March 6 will be televised by CBS. Other times and TV designations will be announced later.

The Women’s Basketball Hall of Fame has moved this year’s induction ceremony to late August because of COVID-19. It was originally scheduled for mid-June.

The Knoxville, Tennessee-based hall of fame has been closely monitoring the COVID-19 situation and made the switch to Aug. 21 for the safety of guests. Hall of Fame President Dana Hart says the feeling is that August “will be a safer time to be together in person.”

The eight-member class of 2021 includes players Tamika Catchings and Sue Bird and former NBA Commissioner David Stern, who died just over a year ago. The 1980 U.S. Women’s Olympic basketball team also will be honored as trailblazers of the game.

The Cleveland Indians plan to have 10,000 fans inside Progressive Field for home games in April.

The team announced Thursday they’re hosting 30% percent of capacity at their downtown ballpark, which was off-limits to fans last year due to the COVID-19 pandemic.

The Indians said ticket availability will be determined monthly until the ballpark can be at capacity — roughly 35,000 fans.

The AL team has been working with the Cleveland Clinic on health and safety protocols. Tickets will be sold in pods to ensure social distancing and fans will be required to wear a mask unless they are eating or drinking while in their ticketed seats.

Gates will open an hour before first pitch.

The Boston Celtics and Bruins will be able to play in front of a limited number of fans starting March 22, and the Red Sox could host more than 4,500 fans at Fenway Park on opening day.

Gov. Charlie Baker announced Thursday that Massachusetts was moving to Phase IV of its coronavirus reopening plan, which will allow large indoor and outdoor arenas and ballparks to admit up to 12% of capacity.

The Bruins and Celtics shut down their 2019-20 seasons last March when the pandemic reached the U.S. and finished up on the road in “bubble” environments established by their leagues. Their 2020-21 seasons began this winter in home arenas but without fans.

The Bruins were scheduled to play in front of fans for the first time on Friday night, when they will play the New York Rangers in Madison Square Garden in front of 10% capacity, or about 1,800 fans.

Gillette Stadium, the home of the New England Patriots, and Fenway Park have been used as mass vaccination sites. Baker said he did not know what would happen with that capacity when the venues return to their regular purposes.

Eleven-time Canadian national boxing champion Mandy Bujold is in isolation after the Canadian team training camp in Montreal was cut short due to a positive COVID-19 case.

In a post on her website, Bujold said she was in isolation at a friend’s house in Kitchener, Ontario.

The 33-year-old Bujold said she was in close contact with the athlete on Monday. She has since tested negative but is following quarantine protocols. Nineteen athletes were in camp working in small groups. The identity of the boxer who tested positive hasn’t been revealed.

Boxing Canada said in a release that it was informed of a potential COVID-19 case within its training camp on Monday.

It’s the latest setback for the team, which has yet to clinch spots in the Tokyo Olympics. The continental qualifiers, scrapped last year due to the global pandemic, have been rescheduled to May 10-16 in Argentina.

Marquette will allow up to 1,800 to attend its men’s basketball regular-season finale March 6 against Xavier.

This will be the first time this season that Marquette has played a home game in front of that many spectators. The Golden Eagles had no spectators for most of their home games. They allowed family members of players to attend a 71-68 loss to Creighton on Feb. 6.

Those 1,800 fans represent about 10% of the capacity at Fiserv Forum, which also serves as the home arena for the NBA’s Milwaukee Bucks. The Bucks just started allowing fans to fill 10% of the arena’s seating capacity to home contests on Sunday after experimenting with smaller crowds earlier in their current eight-game home stretch.

Marquette said tickets for the Xavier game won’t go on sale to the general public.

Most of the tickets will be offered to students. Athletic officials also will be communicating with other groups in their ticket distribution plan, including family members of players and staffers, athletic department personnel and donors. Seating will be arranged to ensure social distancing. Fans must wear masks and can’t bring bags into the arena.

The Xavier game represents Marquette’s first home contest since that Feb. 6 loss to Creighton. The Golden Eagles (11-12) currently are in a stretch of six consecutive road games.