The Latest: NFL reaches a new high of infected players 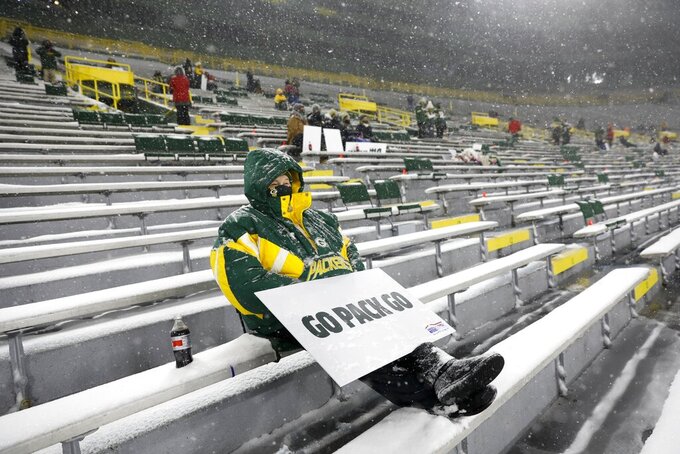 FILE - A few fans watch in Lambeau Field during the first half of an NFL football game between the Green Bay Packers and the Tennessee Titans in Green Bay, Wis., in this Sunday, Dec. 27, 2020, file photo. The eight teams hosting NFL playoff games this month are more than happy to be staying home with all of comfort it brings, but the actual advantage of playing there all but disappeared during this pandemic season of mostly empty stadiums. (AP Photo/Mike Roemer, File)

The Atlantic Coast Conference has postponed two women’s basketball games this week for third-ranked North Carolina State after a positive COVID-19 test, quarantining and contact tracing within the Wolfpack program.

Instead, No. 2 Louisville will visit Virginia Tech on Thursday while Boston College will visit Wake Forest on Sunday.

Top-ranked Gonzaga was scheduled to play West Coast Conference rival Santa Clara in men’s basketball on Thursday afternoon, but the game has been postponed because of COVID-19 protocols in the Santa Clara program.

Instead, undefeated Gonzaga will face archrival BYU at 5:30 p.m. PST on Thursday.

BYU’s originally scheduled game against Pacific on Thursday was postponed due to COVID-19-related protocols within the Pacific program.

The No. 6 Baylor women are restricting team activities after coach Kim Mulkey tested positive for COVID-19, and have canceled Thursday’s much-anticipated home game against No. 4 UConn.

Mulkey missed Baylor’s win Saturday at TCU because of contact tracing after being exposed to a family member who tested positive. Mulkey initially tested negative and was in self quarantine. She had planned to rejoin the team Monday, but tested positive that day and will isolate for an additional 10 days.

The school said Baylor’s participation in upcoming games will be determined by how long the program is restricting activity with safety of the program and its members driving those decisions. The next scheduled game for the Lady Bears is Sunday against Kansas State.

UConn is next scheduled to play at home Saturday against Providence. In that game, coach Geno Auriemma is seeking his 1,098th win, which would tie him with the late Pat Summitt for second on the all-time wins list behind Stanford coach Tara VanDerveer (1,103).

The Memphis Tigers’ men’s basketball game at UCF has been postponed hours before tipoff because of positive COVID-19 cases and ensuing contact tracing at the Florida school.

The American Athletic Conference announced the postponement around midday Tuesday. A new date has not been set.

This is the second straight road game for Memphis affected by the opposing team’s COVID issues. Memphis had been set to play at Temple last weekend before that game was postponed. Memphis now is set to host SMU on Thursday night.

The Georgia Tech men’s basketball team has shut down all athletic activities and postponed Wednesday night’s game at Notre Dame because of COVID-19 protocols.

No date has been set to make up the game against the Fighting Irish.

Georgia Tech (6-3, 2-1 Atlantic Coast Conference) said it won’t resume athletic activities until it meets the guidelines set by the ACC Medical Advisory Group. The school gave no details on what caused the shutdown.

The shutdown comes with Georgia Tech in the midst of an impressive stretch after an 0-2 start. The Yellow Jackets have won six of their last seven games, including ACC victories over North Carolina and Wake Forest in the past week.

Oregon State’s men’s basketball game at Colorado scheduled for Saturday in Boulder has been postponed because of COVID-19 protocols in the Beavers’ program.

The schools and the Pac-12 are working to find a mutually agreeable date to reschedule the game.

This marks the fifth schedule change for the Buffaloes and the third concerning a league opponent. Colorado’s Pac-12 opener at Arizona was moved from Dec. 2 to Dec. 28 due to a pause in the Buffaloes’ program.

Colorado’s home game against Washington State on Dec. 5 was postponed due to COVID-19 issues in the Cougars’ program and has yet to be rescheduled.

Oregon State’s game at Utah on Wednesday also was postponed.

The English Premier League says there were 40 positive cases of the coronavirus among players and club staff following two rounds of tests last week.

It is more than double the highest weekly figure of positive cases since testing began ahead of the return of league play last June. More people were tested than in previous weeks, however.

The league says it “continues to have confidence in its COVID-19 protocols, fully backed by the government, to enable fixtures to be played as scheduled.”

The Premier League will continue despite a third national lockdown being announced on Monday.