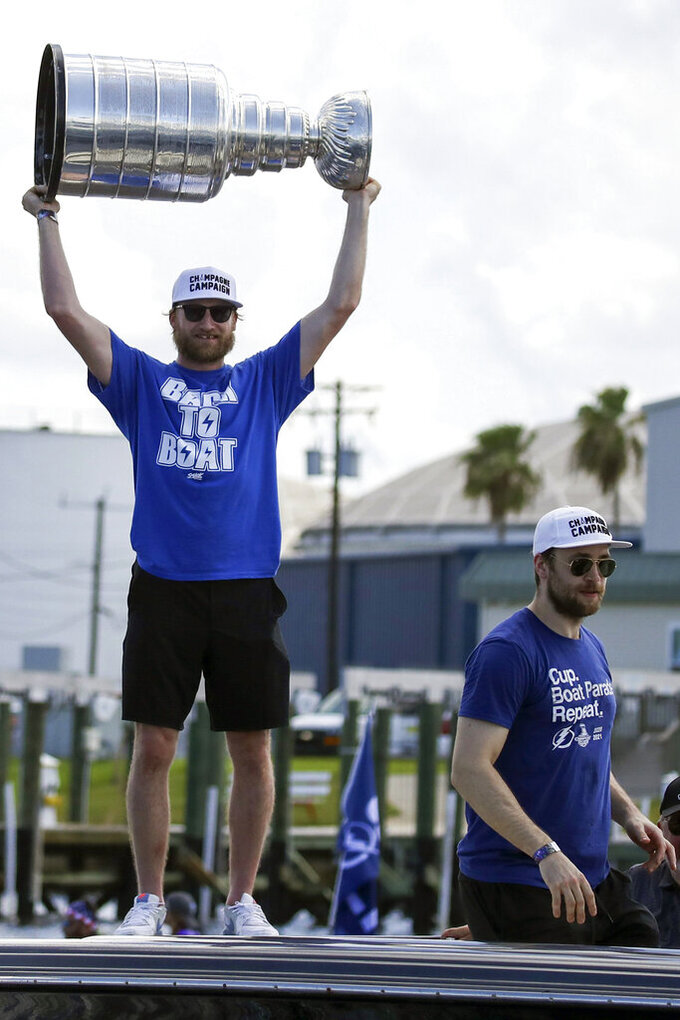 TAMPA, Fla. (AP) — Turns out the Stanley Cup is going to Montreal after all.

But it will return to the Tampa Bay Lightning's possession for an extended party.

After the Lightning celebrated a second consecutive championship with another signature “Champa Bay” boat parade on Monday, hockey's holy grail needed to be sent north of the border for repairs after slipping and hitting the ground during the storm. The bowl of the 128-year-old silver chalice was dented to the point that it looked like Flat Stanley Cup.

“All good, going in for a tuneup,” Cup Keeper Phil Pritchard of the Hockey Hall of Fame said.

It has been damaged and fixed before, including when the 2018 champion Washington Capitals did “Cup stands" (think kegstands) after winning the first NHL title in franchise history. The Cup is still scheduled to be ready for the start of the Lightning's summer of Stanley that players didn't get to enjoy after winning last fall.

The second Lightning boat parade in 10 months was fitting of that desire for more celebration. Captain Steven Stamkos wore a T-shirt bearing the message “BACK TO BOAT," and the back-to-back champs were toasted with a boat parade on the Hillsborough River, with thousands of fans no longer burdened by COVID-19 restrictions gathering downtown to join the fun.

The scene — five days after the Lightning closed out a five-game Stanley Cup Final win over the Montreal Canadiens — hardly resembled the riverfront gathering organized after the team won last year's title while playing in empty arenas because of the pandemic.

Dozens of residents on boats and other watercraft enjoyed a close view of vessels carrying players and coaches. A post-parade rally in a downtown park was delayed more than an hour when a heavy thunderstorm accompanied by gusting winds sent fans scattering for cover.

Eventually, Lightning owner Jeff Vinik and players took the podium to address the crowd in a steady rain.

At one point, forward Yanni Gourde slid across the stage on a trolley while some other players and coach Jon Cooper climbed down to interact with fans along barricades.

Forwards Alex Killorn and Nikita Kucherov took to the water, circling boats and cruising along the river bank on a jet ski.

Playoff MVP Andrei Vasilevskiy placed the Conn Smythe Trophy on his head, much to the delight of drenched spectators soaked by the rain and champagne sprayed by players.

It’s the third time in 10 months that the Tampa Bay region has celebrated a professional sports title with a unique parade concept Tampa officials developed to provide the Lightning and the NFL’s Tampa Bay Buccaneers a way to party safely with fans during the pandemic.

The Bucs were honored five months ago after winning the Super Bowl for the first time in 18 years, with thousands lining the downtown riverfront while being encouraged to wear masks and observe social-distancing practices.

The February celebration capped a magical postseason run the Tom Brady-led Bucs began by winning three straight playoff games on the road before finishing the journey by becoming the first team to win a Super Bowl played in its home stadium.

Brady also provided the most memorable moment of the parade, shockingly tossing the Lombardi Trophy from one boat to another where tight end Cameron Brate caught it for the most famous reception of his career.

The Lombardi Trophy weighs 7 pounds, while the Stanley Cup is 34 1/2 pounds and is now day-to-day with an upper-trophy injury.