Lions aim to keep fans, Commanders trying to get them back 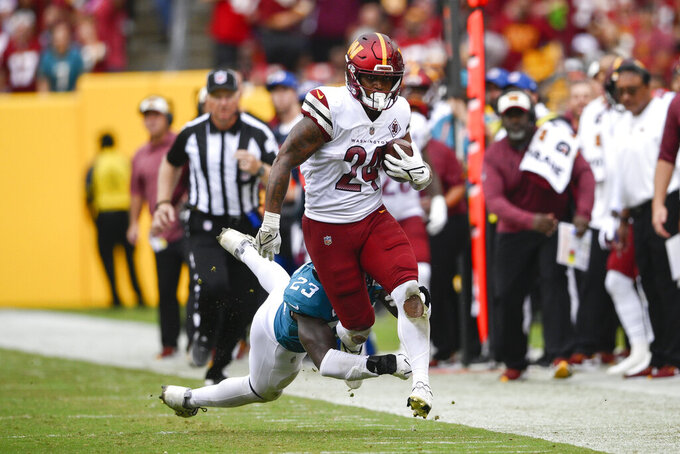 Washington Commanders running back Antonio Gibson (24) runs with the ball against Jacksonville Jaguars cornerback Josh Thompson (23) during the first half of an NFL football game, Sunday, Sept. 11, 2022, in Landover, Md. (AP Photo/Nick Wass)

DETROIT (AP) — Ford Field was filled to the brim with fired-up fans, whipped up into a hopeful frenzy in part by HBO’s “Hard Knocks,” when the Detroit Lions kicked off their season.

Detroit’s strong start against Philadelphia made the indoor stadium arguably as loud as it has been since opening two decades ago.

It didn’t take long, though, for the long-suffering followers of the franchise to witness the physical and mental ineptitude they’ve grown accustomed to over the last several decades in a 38-35 loss to the Eagles.

The NFL gave the Lions two straight home games to open the season for the first time since 1997, and coach Dan Campbell knows they have to make the most of the opportunity against the Washington Commanders (1-0) on Sunday to earn continued support from fans.

“If you don’t show it early enough, we’ll lose it quickly,” Campbell said. “I understand that, and so I think it’s vital.

“Getting close doesn’t count. We’ve got to close these games out.”

Days after the season-opening defeat, tight end T.J. Hockenson was still marveling at what he saw and heard at Ford Field.

“That was definitely the loudest it has been in my four years,” he said. “It’s cool to see how the city is behind us. I think ‘Hard Knocks’ had something to do with that because people got a glimpse of our locker room and the devotion to the game we have here.

“You want to get off to a good start to keep people around, and keep them engaged.”

Washington, with a chance to start 2-0 for the first time since 2011, could use a victory to try to win back some of a fan base that has become increasingly apathetic.

Years of losing, the unpopularity of owner Dan Snyder, a series of off-field scandals and an outdated stadium that is far from a destination have contributed to the decline in interest.

When the Commanders opened with a 28-22 victory over Jacksonville, they drew a crowd of 58,192 in what was the league’s lowest attendance total in Week 1. Team president Jason Wright said the team lost some fans in the summer of 2020 when it dropped the name Redskins after 87 years, adding that the season ticket holder base has grown over the last two years.

“I think bit by bit, we’re grabbing those folks back,” Wright said.

Two years removed from winning a weak NFC East in coach Ron Rivera’s first season in charge, Washington expects to make the playoffs this year and winning the opener was a good start.

The Lions are favored for the first time since late in the 2020 season, according to Sportradar. In that game, Detroit was a 3 1/2-point favorite and lost to Carolina 20-0. The Lions were underdogs in the 24 straight games until being favored this week against the Commanders by 1 1/2 points, according to FanDuel Sportsbook.

TOP OF THE CLASS

The top two picks from the 2016 draft will be under center. Detroit quarterback Jared Goff was selected No. 1 by the Los Angeles Rams and Commanders quarterback Carson Wentz was selected by Philadelphia one pick later.

In Week 1, Wentz had one of his best performances in years while Goff was wildly inconsistent.

Wentz threw four touchdown passes for the first time since 2017, when he played for Philadelphia, in the win over Jacksonville.

Goff was 21 of 37 for 215 yards with two touchdowns and an interception in the loss to the Eagles.

GIBSON AT HIS BEST

Commanders running back Antonio Gibson put his combination of size, speed and hands on display last week, matching a career high with seven receptions for 72 yards and running for 58 yards.

SO FAR, SO GOOD

Detroit desperately needs Jeff Okudah, the No. 3 pick overall in 2020, to bounce back from the injury-stunted start of his career. The cornerback got off to a strong start, making a career-high 10 tackles and defending a pass in Week 1.

“It didn’t look like he missed a beat,” Lions cornerback Amani Oruwariye said. “He looked good. He looked comfortable.”

Washington is already down a key player after losing rookie defensive tackle Phidarian Mathis to a season-ending knee injury. The Commanders signed undrafted free agent Donovan Jeter, a former Michigan player, to replace Mathis and could count on him right away to contribute behind starters Jonathan Allen and Daron Payne.