Lions will use closing preseason game to finalize roster 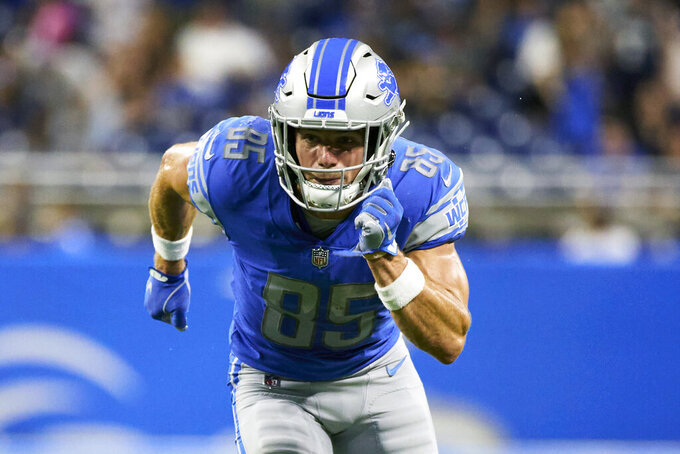 Detroit Lions wide receiver Tom Kennedy (85) plays against the Buffalo Bills during an NFL preseason football game, Friday, Aug. 13, 2021, in Detroit. Lions head coach Dan Campbell and general manager Brad Holmes will be using the team's final preseason game against the Indianapolis Colts on Friday night, Aug. 27, to make their last decisions on their 2021 roster. Players such as wide receiver Tom Kennedy and linebacker Jahlani Tavai are among those competing for a job with the team. (AP Photo/Rick Osentoski, File)

Campbell, in his first year as Lions head coach, believes most of the roster has been set for the season, but there are still about a dozen jobs still up for grabs before Tuesday’s deadline to cut the roster down to 53 players for the season.

At least one of those spots is at wide receiver, where the Lions chose to move on from all of their starters last year. To rebuild the position, the Lions signed Tyrell Williams and Breshad Perriman to one-year deals. While Williams has secured a roster spot as the No. 1 receiver, Perriman has not. The 2016 first-round pick has struggled with a hip injury and a lack of production in camp. His only impact in last week’s preseason game was an offensive pass interference penalty.

“I think it’s hard to say right now,” Campbell said of Perriman’s chance at a roster spot. “There just hasn’t been enough out there.”

One receiver who has made a consistently positive impression at camp is Tom Kennedy. The former Bryant University lacrosse player has spent his past two seasons on Detroit’s practice squad, but he continues to make daily plays in camp and currently leads the Lions in catches and receiving yards this preseason.

The Lions are also looking for playmakers in the backfield. While 2020 second-round pick D’Andre Swift and free agency pickup Jamaal Williams have secured their spots as the top two running backs, the third spot remains up for grabs.

Seventh-round rookie Jermar Jefferson entered camp as the presumed backup, but it’s been Craig Reynolds who has garnered the most attention.

Reynolds was signed to the team just a day before their first preseason game. Despite little preparation, Reynolds rushed for 49 yards and a touchdown, and followed it up with another 29 rushing yards on just five carries last week. He’s earned so much praise that running backs coach Duce Staley has already developed a nickname for him.

“We call him Netflix,” Staley said. “That’s what he was doing. Right? On the couch watching Netflix, and all of a sudden he came in, got a couple yards and scored a touchdown.”

Additionally, Godwin Igwebuike, who started camp at the safety position but has since transitioned to running back, has made a quick impression. He hasn’t played running back since his high school days.

“I was in my spirit, just praying to the Lord, and he’s like, ‘Yo, you’re going to be playing running back,’” Igwebuike said after scoring his first NFL touchdown in Detroit’s preseason opener.

On the defensive side, the Lions are hoping to improve upon a roster that produced the league’s worst defense under former coach Matt Patricia.

Linebacker is a particularly thin group, as 2019 second-round pick Jahlani Tavai has struggled to fit in the new defense despite losing more than 20 pounds this offseason to gain some agility and speed.

Threatening his roster spot is Tavante Beckett, a second-year player out of Marshall who spent his rookie season on Detroit’s practice squad. Though he stands 5-foot-10, 214 pounds, Beckett has the coaching staff eager to see what he can do in the preseason finale.

“He has instincts and he’s kind of a ball guy,” Campbell said. “He can sniff out the football. So, he’s improved. This will be a great chance for him to get a good load in this game and to see what he looks like.”

In the secondary, the story of Lions camp has been undrafted rookie cornerback A.J. Parker. Undrafted out of Kansas State, Parker has not only thrust himself into the nickel cornerback conversation, but he’s worked his way onto the starting lineup in practices. Though defensive coordinator Aaron Glenn has preached patience with him.

Another young cornerback who will be fighting for a roster spot is Bobby Price. Entering his second season in the NFL after going undrafted last year, Price is undergoing a positional change from safety to cornerback. But like many players in his position, he may win a roster spot via special teams, where he has served as the first-team gunner on punt coverage units all camp.

“Special teams is going to be a huge part of this selection process for us on the 53,” Campbell said.