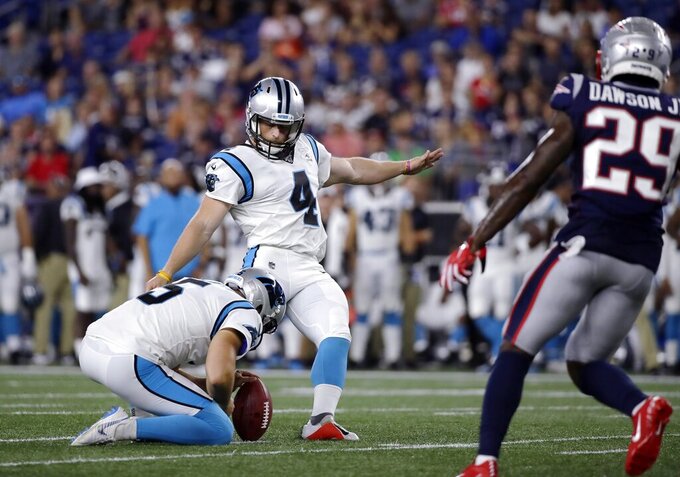 FILE - In this Aug. 22, 2019, file photo, Carolina Panthers kicker Joey Slye (4) kicks against the New England Patriots in the second half of an NFL preseason football game in Foxborough, Mass. The Panthers brought kicker Joey Slye to training camp on a whim, someone to be a camp body and give Graham Gano a rest when needed. But with Gano on IR, Slye, an undrafted rookie and virtual underdog, has won the job and will handle kicking duties this season for Carolina.(AP Photo/Elise Amendola)

This year, he'll be kicking for the Carolina Panthers — and his late brother A.J.

An undrafted rookie in 2018, Slye was thrust into a prominent and potential game-determining role when the Panthers placed veteran kicker Graham Gano on injured reserve on Friday.

Coach Ron Rivera said the Panthers signed Slye "on a whim" in early August when Gano experienced re-occurring pain in his plant leg during training camp. Slye was brought in as a short-term fill-in while Gano recovered.

But Gano never did.

Slye took advantage of his opportunity making 7 of 8 field goals during the preseason, including all three attempts from beyond 50 yards. His only miss was a 48-yarder that was blocked due to a protection breakdown.

"It wasn't what I was expecting coming in here," Slye said, knowing that Gano was an established kicker who'd missed just three field goals for Carolina in the past two seasons.

But Slye quickly shied away from any praise.

He said all of that should be directed toward his brother A.J., a former Division III linebacker at Salisbury University who passed away in 2014 after a 14-month battle with acute myeloid leukemia, a rare form of blood cell cancer, at the age of 20.

It was a devastating blow for Joey, who viewed A.J. as his closest friend. They talked sports continuously and dreamed one day of playing together in the NFL.

On the field he honors his brother by raising six fingers to the sky after every made field goal and extra point. A.J. wore No. 6 when they played together at North Stafford High School in Virginia.

"It gives me the understanding that he's still there," Slye said. "I find comfort in that. I like to do it because I want a lot of my recognition to go to him. I don't need it. I don't want it. I want my brother to be known for how he fought, what he fought for and the type of person he was. I just want to continue his legacy forever."

Off the field he helped start the SlyeStrong#6 Foundation , which is devoted to helping find a cure for adult/childhood cancer.

Slye has some of his brother's fight in him.

He could have easily given up on his dream of playing in the NFL after being unable to land a job last year. But he wouldn't look for a full-time "regular job" because he refused to give up on his dream — and because he promised A.J. he would make it to the NFL.

So he kept on kicking.

"I put all of my eggs in one basket, basically," Slye said. "I knew other (kickers) were working on their skills. For a lot of guys in the special teams realm it's about how long you are willing to keep fighting for that opportunity."

Slye is known for having a big leg — he made a 59-yard field goal in the preseason with plenty of room to spare — but his accuracy has always been a concern. He made only 72.2 percent of his field-goal attempts at Virginia Tech.

But he's been accurate in games and practice since his arrival in Carolina.

Rivera said Slye is a true "feel good story," but said it's now time to see if he can produce amid the pressure of kicking in regular-season games, something Slye has never done before.

"With everything he has gone through, he has weathered the storm," Rivera said. "He's shown us every reason to be confident in him. But we'll see. That's why you play on Sunday."

NOTES: Cam Newton took all of his reps at practice Monday and remains on target to start Sunday's season opener against the Rams. ... Greg Olsen did not practice but Rivera said "he's fine" and that the veteran tight was "taking care of something." ... Outside linebacker Bruce Irvin (hamstring) and backup offensive tackle Greg Little (concussion) did not practice.