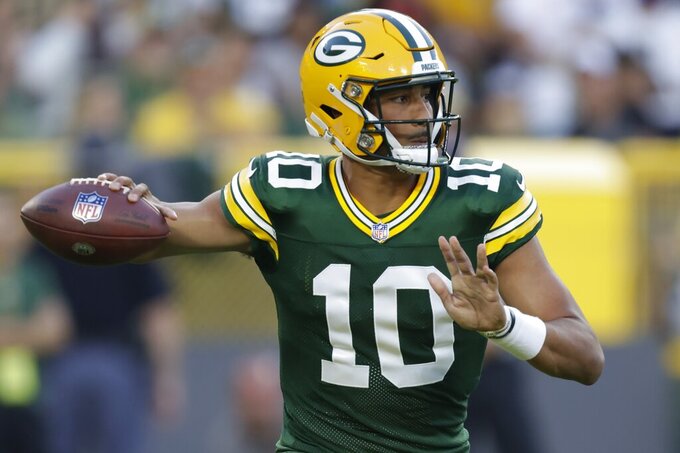 Coach Matt LaFleur said Love “kind of got dinged” while getting sacked by Jonathan Greenard late in the first half of the Packers' 26-7 preseason loss to the Houston Texans on Saturday night. Greenard came from Love's blind side and stripped the ball from him to force a fumble.

“I got my arm hit on that play and I just dinged my shoulder a little bit," Love said.

LaFleur said he had hoped Love would play three quarters. The 2020 first-round pick from Utah State instead sat out the entire second half.

Love expressed confidence he'd be ready for the Packers' next preseason game.

Love went 12 of 17 for 122 yards with a touchdown pass in his first game appearance since getting taken 26th overall in the 2020 draft.

He went 6 of 6 for 89 yards on a first-quarter drive that ended with Kylin Hill turning a short completion into a 22-yard touchdown. Green Bay’s offense wasn’t as effective the rest of the night as the Packers rested virtually all their regulars.

“We’ve got to get them off the field in third-and-longs, and we didn’t do a good job in doing that,” Texans coach David Culley said. "Other than that, I thought they played really good team defense.”

Although the circumstances surrounding Green Bay’s Aaron Rodgers and Houston’s Deshaun Watson have been two of the NFL’s biggest offseason stories, neither played Saturday as the spotlight shifted to the other quarterbacks on each team.

Tyrod Taylor, the Texans’ likely starter if Watson isn’t available, went 4 of 4 for 40 yards in his lone series. Taylor led a 53-yard drive that resulted in one of Ka'imi Fairbairn's four field goals.

“We were able to make some plays, move the ball down the field,” Taylor said. “Obviously, you want to finish with a touchdown, but anytime you get points, you can never be mad about that.”

Davis Mills, the Texans' rookie third-round pick from Stanford, went 11 of 22 for 112 yards and an interception while leading two scoring drives.

Watson, who had an NFL-leading 4,820 yards passing last season, returned to practice Monday after not taking part in workouts for a week. Watson asked for a trade in January before 22 women filed lawsuits alleging that he sexually assaulted or harassed them. Houston police and the NFL are investigating the allegations, but no charges have been filed.

LaFleur said this week Rodgers probably wouldn’t play at all this preseason, enabling Love and Kurt Benkert to get as much work as possible. Rodgers skipped the Packers’ organized team activities and mandatory minicamp as part of a standoff with team officials, but the three-time MVP reported to training camp on time.

The Packers didn’t dress 30 players for Saturday’s game. That included receiver Randall Cobb, who played for the Texans last year.

Cobb played for Green Bay from 2011-18. The Packers reacquired him at the start of training camp at Rodgers’ request.

Rodgers and Cobb didn’t play this weekend, but they still made their presence felt on social media.

Rodgers, Cobb and All-Pro left tackle David Bakhtiari all made posts with a picture of former Packers outside linebacker Clay Matthews in an apparent attempt to campaign for his return to Green Bay. Rodgers’ post even included the message “Bring Him Back.”

The Texans placed defensive back Bradley Robey and offensive linemen Roderick Johnson, Tytus Howard and Laremy Tunsil on the reserve/COVID-19 list before the game.

Green Bay hosts the New York Jets next Saturday after holding joint practices with them Wednesday and Thursday.