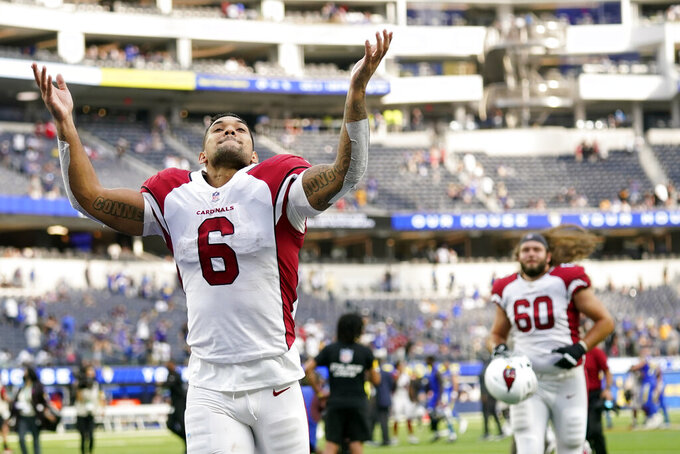 Arizona Cardinals running back James Conner (6) runs off the field after a win over the Los Angeles Rams during an NFL football game Sunday, Oct. 3, 2021, in Inglewood, Calif. (AP Photo/Jae C. Hong)

TEMPE, Ariz. (AP) — Kyler Murray has progressed from a pretty good quarterback to one of the NFL's elite in a hurry.

It's a big reason why the Arizona Cardinals look as if they're on the same track.

Arizona is 4-0 for the first time since 2012 after a 37-20 win over the previously unbeaten Los Angeles Rams.

Murray went 24 of 32 for 268 yards and two touchdowns, becoming the first quarterback in franchise history to complete at least 75% of his passes in three straight games.

Murray often downplays his team's wins, but not on Sunday. Instead, he's starting to see the progress he's envisioned since he was drafted with the No. 1 overall pick in 2019. The win snapped an eight-game losing streak against the Rams, who figure to battle the Cardinals all season in the tough NFC West.

“It was a good game,” Murray said. "We executed well, we fought from start to the end. I’m proud of the guys.”

Murray's getting plenty of help. The defense is a much more complete unit, getting production from its young core of safeties Budda Baker and Jalen Thompson, linebacker Isaiah Simmons and rookie cornerback Marco Wilson.

Third-year coach Kliff Kingsbury — who is now 17-18-1 — also appears to be growing more confident in his role.

“I feel like as a team, we understand we have a long way to go,” Kingsbury said. “You turn on the film and you see lots of ways we can get better. ... But it's trending in the right direction. I like our progress so far.”

The Chase Edmonds-James Conner combination. The Cardinals believed Conner would be a good fit when they signed the former Steelers running back during the offseason. So far, he's been exactly what the team needed. Edmonds continues to be productive on longer runs and in the passing game, while Conner can get tough yards close to the goal line. He had two TDs against the Rams.

Penalties continue to be an issue. The Cardinals were whistled for seven against the Rams and have taken the eighth-most penalties in the league.

Edmonds might not be a true No. 1 running back, but he is proving he can handle an expanded role after the team lost Kenyan Drake to Las Vegas in free agency during the offseason. Edmonds ran for 120 yards on 12 carries against the Rams, adding four receptions for 19 yards.

Chandler Jones. The linebacker had a mammoth game in Week 1, finishing with five sacks, but opposing teams have learned from that performance and are paying very close attention to him. Jones had one quarterback hurry against the Rams and no tackles in 61 snaps.

The Cardinals remain relatively healthy after their first four games. They're a little banged up on the offensive line and hope to get Kelvin Beachum and Justin Murray back soon. Starting cornerback Byron Murphy Jr. is battling issues with his ankle and ribs. Kingsbury said he's day to day.

The Cardinals will spend a lot of time at home over the next month, starting with next Sunday's game against division rival San Francisco. The 4-0 start doesn't guarantee anything. Arizona was 6-3 last season before fading down the stretch and missing the playoffs.

By The Associated Press an hour ago
By Barry Wilner 2 hrs ago
By Arnie Stapleton 8 hrs ago
By Mark Ludwiczak 9 hrs ago
By William J. Kole 9 hrs ago