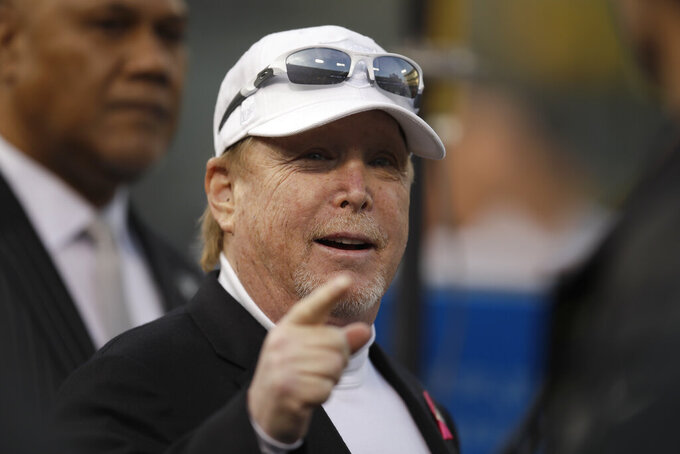 FILE - In this Thursday, Nov. 7, 2019 file photo, Oakland Raiders owner Mark Davis before an NFL football game between the Raiders and the Los Angeles Chargers in Oakland, Calif. Mark Davis is all in on the Las Vegas Aces. The Raiders owner was officially approved by the WNBA Board of Governors last week.(AP Photo/Ben Margot, File)

Mark Davis is all in on the Las Vegas Aces.

The Raiders owner was officially approved to buy the franchise by the WNBA Board of Governors last week and has grand plans for the Aces.

He will open a training facility for the team next year that will have two courts, locker rooms and training facilities. The center will be next to the Raiders headquarters and also will house the Al Davis-Eddie Robinson Leadership Academy — a program to develop minority coaching and general manager candidates in the NFL,

“One thing I noticed was that what they didn't have was a real home,” Davis said about the Aces during a media availability Wednesday. “They were practicing at UNLV, had offices at MGM and offices down in an airplane hanger.”

The new owner admits that purchasing a WNBA team might not be the best business decision as franchises tend not to be money makers. However, the Aces season-ticket holder said he always had a love for women's basketball passed down from father Al, a huge fan of Geno Auriemma and the UConn Huskies.

“Women’s sports deserve so much more recognition,” said Davis, who was first approached by MGM to buy the team from the casino before the pandemic hit.

He sees a bright future for the team and the WNBA as a whole. He said he has some ideas he wants to bring to the league and its owners, but didn't want to expound on them yet until he's talked to them first.

Davis likened the league to the American Football League that his dad was a big part of.

“That league was fighting for its survival. Two things they got were a TV contact which was important for their stability," he said. "When they signed Joe Namath to that $400,000 contract that bumped the league into everyone’s imagination.”

Davis sees big things for his new team on the court. The Aces lost in the WNBA Finals last summer and are poised to be a favorite for the championship this year with the return of Kelsey Plum, Liz Cambage and the addition of Chelsea Gray to support league MVP A'ja Wilson.

“We plan to win the championship this year,” Davis said. “I want to learn about women’s basketball, learn how they structure the rosters and all that.”

Unlike his father who served as his own general manager and made nearly every significant personnel decision for the Raiders before he died, Davis plans to let basketball minds Bill Laimbeer and Dan Padover run the show,

Davis has deferred to the GM and coach of the Raiders during his time running the team.

Davis said the team will continue to play at Mandalay Bay this season and then will see after that where the franchise will play its home games.

“I'd like to compliment MGM for what they’ve done,” he said. “They put $10 million into Mandalay Events center. It’s a great facility. we are obligated for one year to play there. Then we have a couple of year options. We are looking to do what’s best for the organization.”

Davis said that he's learned the venue a team plays in is very important to the local economy.

“MGM owns most of those fixed assets, naming rights,” he said. “We're going to need those kinds of revenue streams to build the coffers of the Aces. Whether that happens through negotiations or whether we build a place for the Aces, those are decisions we’ll make in the near future.”