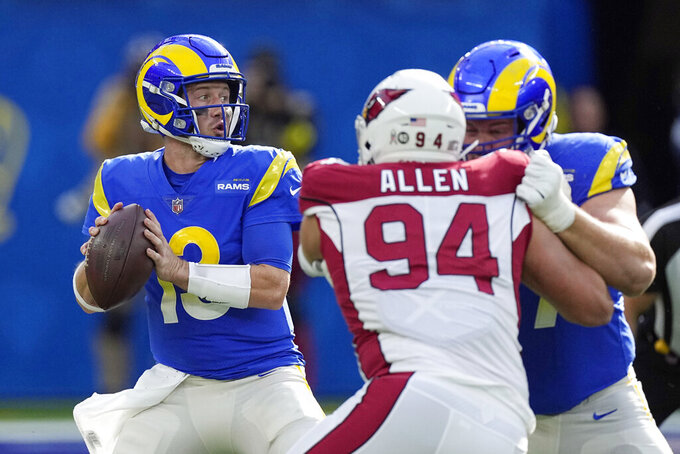 INGLEWOOD, Calif. (AP) — Colt McCoy realizes every time he steps on an NFL field these days might be his last chance to play, so the Cardinals' 36-year-old backup quarterback got some friends and relatives out to Los Angeles this weekend when he became pretty sure he would have to fill in for Kyler Murray.

McCoy then had a game to remember, while the Los Angeles Rams had another day to forget in a season that's turning into a nightmare.

McCoy passed for 238 yards in his first start of the season, James Conner rushed for two touchdowns and Arizona hung on for a 27-17 victory Sunday over the Rams, who lost Super Bowl MVP Cooper Kupp to a possibly serious ankle injury.

“As a backup, you just never know when your opportunity is going to strike,” McCoy said. “Quite honestly, I want K-1 (Murray) to be healthy. He’s a phenomenal player. But in this situation, with linemen out, our backs against the wall, in a division game on the road, I dug deep and was proud to go out there and play as hard as I can.”

In the 34th start of his 13-year career, McCoy went 26 of 37 while patiently running a disciplined offensive game plan for the Cardinals (4-6), who grinded out a much-needed victory for coach Kliff Kingsbury after losing four of their past five.

“It's been a struggle, there's no doubt, this season,” Kingsbury said. “We haven't played up to our standards yet, or coached. ... But against another team that was struggling and trying to find an identity, to come here ourselves and find a way to get it done is a good step in the right direction.”

Rondale Moore had nine catches for 94 yards, including a jaw-dropping grab on a long pass on fourth-and-3 in the fourth quarter to set up Arizona's clinching TD run by Conner two plays later with 7:41 to play.

Wolford passed for 212 yards in an inconsistent performance for the defending champion Rams (3-6), who lost for the fifth time in six games. They also lost Kupp in the fourth quarter when he went down awkwardly while being hit by Marco Wilson after failing to catch a poorly thrown pass from Wolford.

Kupp, the AP’s Offensive Player of the Year while winning the triple crown of receiving last season, made only three catches for minus-1 yard before incurring an injury that had him visibly unhappy as he limped to the locker room.

“I was upset with myself a little bit,” Wolford said. “It was kind of a weird play, but I hate to see him getting hurt. He works real hard, and it’s sad to see.”

Darrell Henderson rushed for a TD for the Rams, who are in last place in the NFC West just nine games after they won the Super Bowl. Los Angeles is three games under .500 for the first time in McVay’s career.

“We've got to continue to have some resolve about ourselves, and then have some better execution,” McVay said. "By no means am I saying that there’s no better positions that (the players) could be put in, but I do want to see us be able to capitalize and make some of those critical plays when they’re there to be had.”

With Stafford still in the concussion protocol after apparently getting hurt in last week's loss at Tampa Bay, Wolford went 24 of 36 and threw his first career TD pass to Van Jefferson with 7 seconds to play. The Rams also used third-string QB Bryce Perkins on several plays, with both quarterbacks playing behind LA's ninth different starting offensive line in nine games.

Arizona went ahead for good on Conner's 4-yard TD run to cap a 13-play drive in the second quarter. Cards rookie Myjai Sanders then forced a fumble while sacking Wolford, and McCoy led another scoring drive capped by Green's toe-tapping catch 24 seconds before halftime for the veteran's first TD of an injury-affected season.

McCoy banged his left knee on the turf while getting sacked by Justin Hollins in the third quarter, and third-stringer Trace McSorley took two snaps before McCoy returned on the next drive.

Cards TD Zach Ertz injured his knee on their opening drive. The three-time Pro Bowl selection eventually went to the locker room on a cart. Kingsbury had no update postgame. ... New Cards K Tristan Vizcaino made a 46-yard field goal with 3:44 to play. He replaced Matt Prater. ... Budda Baker made a clinching 53-yard interception return in the closing minutes. He was expected to miss the game earlier this week with a sprained ankle, but suited up. ... Both teams didn't have their starting left tackles with Los Angeles' Alaric Jackson and Arizona's D.J. Humphries sidelined.

Rams: At New Orleans next Sunday.