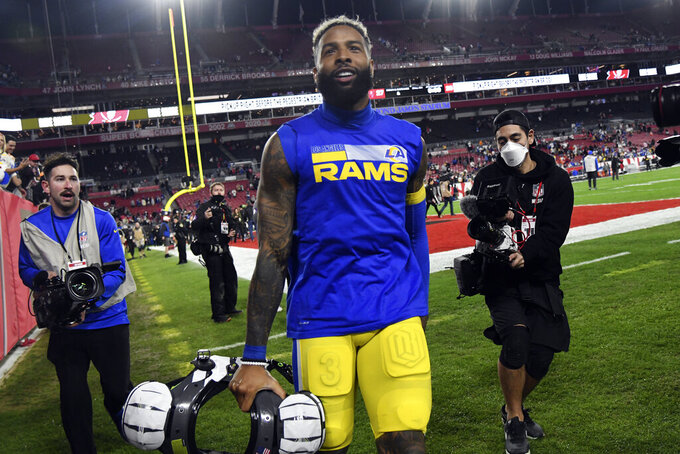 FILE - Los Angeles Rams wide receiver Odell Beckham Jr. (3) celebrates after the team defeated the Tampa Bay Buccaneers during an NFL divisional round playoff football game on Jan. 23, 2022, in Tampa, Fla. The Los Angeles Rams have not given up on re-signing Beckham, even if the injured receiver was decidedly unimpressed by their initial attempts to do so. (AP Photo/Jason Behnken, File)

THOUSAND OAKS, Calif. (AP) — The Los Angeles Rams have not given up on re-signing Odell Beckham Jr., even if the injured receiver was decidedly unimpressed by their initial attempts to do so.

Rams coach Sean McVay responded confidently to questions Wednesday about tweets from Beckham regarding his early contract negotiations with Los Angeles. Beckham made it clear he felt the Rams low-balled the pass-catching star who energized their offense after his midseason arrival.

“I love Odell,” McVay said. “We have constant dialogue. I think he also knows that certainly I don’t think that’s the last (offer) that would come from us. I’m not familiar exactly what it is. He knows how we feel about him. We’ve got a little bit of time, but (I) love Odell. Nothing but good things coming from me.”

Beckham famously took on a key role in the Rams' championship run after engineering his departure from Cleveland last season. He had 27 receptions for five touchdowns during the regular season, and he added 21 more catches for 288 yards and two TDs in the postseason.

He even scored the Rams' first touchdown in the Super Bowl with a beautiful catch on a 17-yard pass from Matthew Stafford, but Beckham tore his knee ligaments for the second time in 16 months later in the game.

Beckham isn't expected to play this season until November at the earliest, and most Rams fans hoped Beckham would reach a multi-year deal with the Rams to rehab with the team before returning to the field when healthy.

But no deal was signed, and Beckham gave some insight into the reasons when he jumped into his Twitter mentions Wednesday in a thread discussing a reported sighting of the receiver at the Buffalo airport.

“LA knows where I wanted to be,” Beckham wrote. “But they didn’t offer me…. ANYthing! So idk what people want me to do, I def kno my worth and what the offer was isn’t reflective of that. So it’s tough to say that I can come on back even tho I thought I finally found that home!”

The Rams still have a locker reserved for Beckham at their training complex, complete with his nameplate and gear. He joined the team to celebrate its championship banner-raising at SoFi Stadium last month, carrying the Lombardi Trophy during the ceremony.

Beckham even crashed McVay’s wedding earlier in the summer, so they’re clearly still on good terms. Beckham just wants to see those good feelings reflected in a fair contract offer.

“LA treated me normal and special all in the same breath,” Beckham wrote. “We see how that played out! For both sides. I went out to win a (trophy) there knowin the risk of playin without an ACL… and then I got the lowest of low offers after that goin into the next season. Impossible.”

The Rams' passing targets are struggling this season behind NFL receptions leader Cooper Kupp. Free-agent signee Allen Robinson has a mere 12 catches for 107 yards while struggling to find a consistent role in the offense, while No. 3 receiver Van Jefferson has yet to play this season after knee surgery in training camp. Kupp is the only Rams wideout with more than 200 yards receiving.