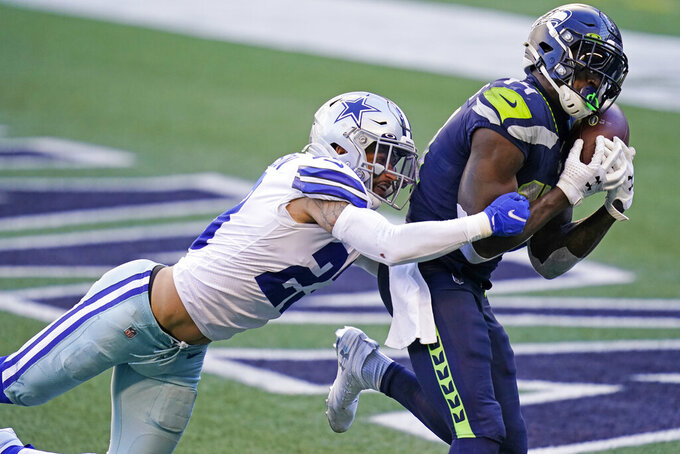 The Dallas secondary committed the team's first four penalties, blew several assignments for the second consecutive week and gave up Russell Wilson's fifth touchdown pass for the go-ahead score in the final two minutes in Seattle.

The injury-challenged unit is the biggest of several questions for the 1-2 Cowboys, who play the first of three straight home games Sunday against Cleveland after a 38-31 loss to the Seahawks.

“Anytime you play, people are not supposed to run wide open,” coach Mike McCarthy said. “That’s what Mondays are for, and we’ll take a hard look at it.”

With Chidobe Awuzie and Anthony Brown on injured reserve, the Cowboys are suddenly leaning on rookie Trevon Diggs, a second-round pick who might be their best cornerback already and played every snap against Seattle.

Career backups (Jourdan Lewis) and journeymen (Daryl Worley) are playing almost the entire game. Brandon Carr, a 34-year-old who spent five of his first 12 seasons with the Cowboys, is back as a potential Band-Aid, although he hasn't played much yet.

Before Metcalf's TD, the Cowboys gave up an 11-yard completion to Greg Olsen on fourth-and-3 when a stop might have sealed a second straight come-from-behind victory.

Diggs also let Metcalf get past him on what should have been a 63-yard touchdown in the first quarter, but Metcalf celebrated early, allowing Diggs to force a turnover by punching the ball out at the 1-yard line.

“It was really on us, honestly ... just miscommunication,” Diggs said. “There are things we’ve got to correct in practice and things like that. We’re going to get it right. It’s just communication. That’s literally it.”

A pass rush that was pedestrian the first two weeks had its best game against Wilson. The Cowboys were disciplined and patient in trying to keep Wilson from getting outside, and Aldon Smith had three of the four Dallas sacks. ... Dak Prescott had a second straight 400-yard passing day for the first time in his five seasons, this time with a career-high 472 yards.

Poor special teams play cost the Cowboys four points in the first half. Tony Pollard misplayed a kickoff at the goal line, was way too slow trying to recover and had to fall on the ball at the 1-yard line. Ezekiel Elliott slipped on the first play in the end zone for a safety. Greg Zuerlein hit the upright on his first PAT kick and had the second blocked. In the second half, Pollard cost his team a timeout when he was the missing player on the punt team.

Elliott was mostly an afterthought, which is rare for the two-time rushing champion. Dallas' first six plays were passes and Prescott had a career-high 57 attempts. Elliott dropped three screen passes and finished with 14 carries for 34 yards, with a long run of 9.

Executive vice president of personnel Stephen Jones said on his radio show Monday that undrafted rookie right tackle Terence Steele left the Seattle game with flu-like symptoms that are not related to COVID-19. Because the move happened not long after Steele was overpowered on a fourth-and-1 play that Elliott somehow converted and there was no announcement of an injury, it appeared to be a benching.

38 — The Cowboys have given up at least 38 points in consecutive games for the first time since 1988, when they finished 3-13 in the last of Tom Landry's 29 seasons as coach. Dallas rallied from 15 points down in the final eight minutes to beat Atlanta 40-39 in Week 2.

The Cowboys figure to be favored in all three of these upcoming home games. The winless New York Giants visit Oct. 11 before a Monday night game against Arizona on Oct. 19. Anything less than a sweep starting with the Browns, and there's a good chance Dallas will have trouble escaping the shadow of .500 — or worse — in McCarthy's first season.