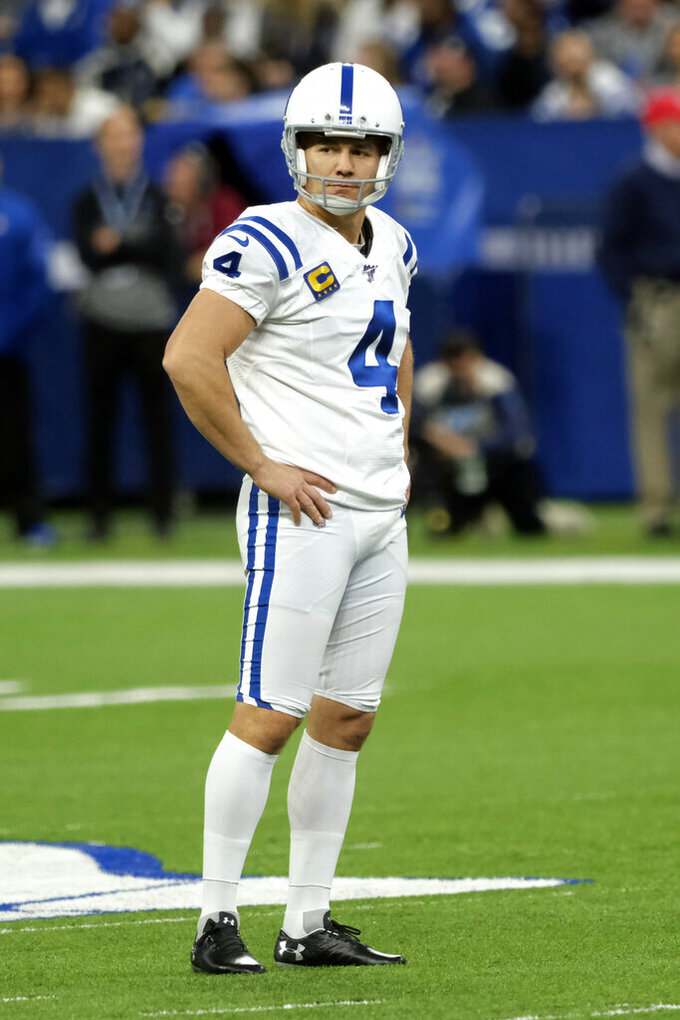 Indianapolis Colts kicker Adam Vinatieri (4) reacts after a missed field goal against the Tennessee Titans during the first half of an NFL football game in Indianapolis, Sunday, Dec. 1, 2019. (AP Photo/AJ Mast)

He still has faith in quarterback Jacoby Brissett, still supports kicker Adam Vinatieri, and still maintains his team can reach the playoffs — no matter what the stats or critics suggest.

“Usually 10-6 gets you in a high percentage of the time, so we’ll see where the numbers are,” Reich said almost immediately after Sunday’s 31-17 loss to Tennessee. “Either way, whether it gets us in or not, our approach doesn’t change.”

Time will tell if Reich is right. But he can’t change philosophies now.

For two years, Reich asked his team to follow a simple mantra about steadily improving. He insists it helped the Colts emerge as a playoff team in 2018 after starting 1-5, and led to this season’s 5-2 start after Andrew Luck announced his unscripted retirement in August.

Can the Colts make it work again?

Over the past three weeks, Indy (6-6) has fallen from AFC South leader to third place, two games behind division-leading Houston, one game behind second place Tennessee. The Colts have faded to ninth in the AFC, three spots out of the final playoff spot, and they spend three of the final four weeks on the road.

Playoff positioning is only part of the problem.

Indy has lost four of five, scoring 17 or fewer points three times during that span. And with general manager Chris Ballard confirming last week four-time Pro Bowl receiver T.Y. Hilton had a setback in his recovery from an injured calf — and Reich confirming Sunday that No. 2 receiver Devin Funchess would miss the rest of the season with a broken right collarbone — the immediate future looks even bleaker.

On Monday, Reich announced another receiver, Chester Rogers, would miss the rest of the season with a knee injury.

Reich remains uncertain when No. 1 running back Marlon Mack or rookie receiver Parris Campbell might return. Both have hand injuries.

So instead of changing game plans, Reich believes the best thing to do now is test the one that’s been reliable before.

“Here’s the thing with our mentality — we are 1-0 and 1 percent better every day — and it’s really at moments like this that you better have some substance behind those words,” he said Monday. “It better not just be words, it has to have some substance to it. I believe that is what we have in our locker room.”

Though Indy allowed Derrick Henry to rush for 149 yards and one touchdown, the Colts defense has continued to be pretty stout.

With 5½ minutes left in Sunday’s game, the Colts had allowed just 17 points, including Henry’s 13-yard touchdown run on fourth-and-1, and a field goal after Jacoby Brissett was picked off in the Colts’ red zone.

The placekicking unit. Adam Vinatieri has missed eight field goals and six extra points this season, but not all of the problems have been his fault.

A bad hold led to him missing a go-ahead field goal late in the loss at Pittsburgh. On Sunday he had a 46-yard field goal blocked and returned for the go-ahead touchdown with 5:02 to go. Afterward, defensive tackle Margus Hunt acknowledged he missed the block on Dane Cruikshank, who raced in almost untouched for the block.

Tight end Jack Doyle. With Pro Bowler Eric Ebron now on injured reserve (ankle) and Hilton still out, Doyle is the most proven and dependable receiver on the roster.

He made the Pro Bowl in 2017 after emerging as Brissett’s favorite target, and the Colts may need that combination to give the offense a jump-start over the final quarter of the season. Brissett threw two interceptions Sunday.

Running back Jonathan Williams. He had 100-yard games in each of the first two appearances after replacing Mack. But he didn’t play in the second half Sunday, an absence Reich later described as an in-game adjustment.

With Rogers out, the Colts will spend this week waiting to see if cornerback Kenny Moore II (ankle) and Campbell return.

4 — Rogers will become the fourth Indy receiver to finish this season on injured reserve.

He joins Funchess, Indy’s No. 2 receiver on opening day, and Daurice Fountain, a second-year player who appeared bound for a breakout season until he was hurt during training camp. That list does not include Ebron, a tight end; Hilton, who has missed four of the last five games; or Campbell.

While the defense has played well enough to keep the Colts in the playoff hunt, the offense and special teams units must find a way to start scoring more points.