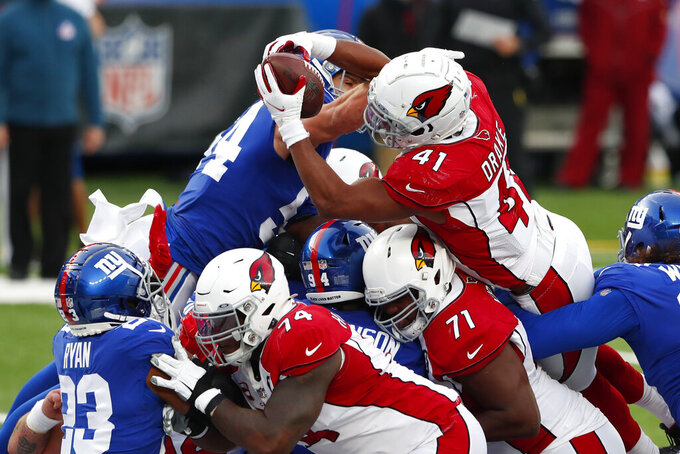 Kliff Kingsbury and the Cardinals are back in a playoff spot with three weeks left in the regular season because of a franchise-record performance by linebacker Haason Reddick and the play of his buddies on the defense.

Reddick had a franchise-record five sacks and three forced fumbles as the Cardinals ended a three-game skid and spoiled the return of Giants quarterback Daniel Jones with a 26-7 victory over New York on Sunday.

“Hopefully it sparks something,” said Reddick, who broke the team record of 4 1/2 sacks set by Curtis Greer in 1983 against the Eagles. “When you looked at us in practice, the energy was different. The intensity was crazy. I felt like everybody knew this was a game that we needed. The fact that we came out here, played hard and got the W is hopefully a spark for us, and it pushes us for the rest of the season so we can we can continue to the goal we set out, to get into the playoffs”

After opening the season 6-2, the Cardinals lost four of five to fall out of a playoff spot. Coupled with Tampa Bay’s 26-14 win over Minnesota (6-7), the Cardinals are back in a wild-card berth.

Murray, who went 24 of 35 for 244 yards and a touchdown, said safety Budda Baker talked to the team this week, saying to look at themselves if they want to get back to the playoffs for the first time since 2015.

“At this point. we have to go out there and execute,” said Murray, who ran 10 times for 47 yards. “Every game for the rest of the season matters for us. We know what we’re striving for. We’ve got to keep grinding, work hard, practice hard and translate that to the game.”

The loss ended a four-game winning streak for the Giants (5-8), who were coming off a win over Seattle that was their best performance of the season.

“I don’t think we have any kind of a hangover from going out to Seattle last week," Giants coach Joe Judge said. “I don’t think that’s a cause of it right here. And again, you know, this game was completely independent of anything that happened before. We simply didn’t come out today and we didn’t, you know, coach one off. We didn’t play well. And that’s just the hard truth of it.”

Mike Nugent came off the practice squad and added his first four field goals in more than a year, and Kenyan Drake scored on a 1-yard dive as Arizona won for only the second time in six games.

Hopkins finished with nine catches for 136 yards as the offense rolled up 390 total yards. The defense and special teams made major contributions, setting up the first 13 points for Arizona. The D limited New York to 159 yards in making Jones' return from a one-game absence with a hamstring injury miserable.

Jones finished 11 of 21 for 127 yards and two fumbles, including one lost on the opening series. He was sacked six times before leaving late for Colt McCoy.

New York's only score game on a 1-yard run by Dion Lewis on its opening possession of the second half, cutting the deficit to 20-7. A 39-yard pass from Jones to Golden Tate set up the TD.

Murray threw a 7-yard pass to Dan Arnold to cap a 21-yard possession set up by a lost fumble by Lewis on a kickoff return.

Nugent, subbing for the injured Zane Gonzalez, kicked field goals of 34 and 37 earlier. The first one was set up by a 24-yard punt return by Christian Kirk to the Giants 38.

Drake scored to extend the lead to 20-0 on the opening drive of the second half.

Veteran Cardinals receiver Larry Fitzgerald was back after missing two games with COVID-19. He had two catches to extend his streak of consecutive games with a catch to 254.

Arizona: DL Gordon Phillips (hamstring) was knocked out of the game early. LG Justin Pugh (calf) and RT Kelvin Beachum (back) were injured, but there was no update on their status.

New York: Jones was limping by the end of the game. McCoy, who started in last week's win over Seattle, replaced him late in the fourth quarter and was treated as badly as Jones.

Cardinals: head back to Arizona and will play another NFC East team, the Eagles,

Giants: stay home and play host to the Cleveland Browns on Sunday night in a flexed game.