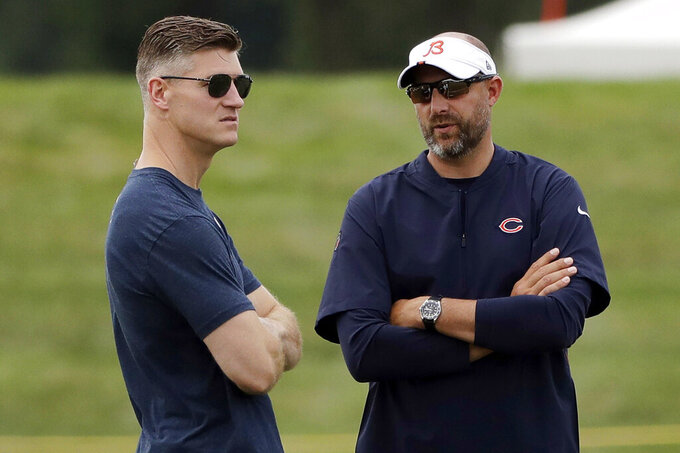 FILE - In this July 26, 2019, file photo, Chicago Bears head coach Matt Nagy, right, talks with general manager Ryan Pace during NFL football training camp in Bourbonnais, Ill. Coach Matt Nagy is ready to call plays again on offense for the Chicago Bears. Nagy said Friday, April 2, 2021, he is taking back those duties after handing them off to offensive coordinator Bill Lazor midway through last season in an effort to shake up a struggling team. Chairman George McCaskey opted to stick with Nagy and Pace, citing their leadership and the way the team handled the big losing streak last season. (AP Photo/Nam Y. Huh, File)

Nagy said Friday he is taking back those duties after handing them off to offensive coordinator Bill Lazor midway through last season in an effort to shake up a struggling team.

“There’s a lot of things that go into that," Nagy said. “You know, when we look through the scheme eval (evaluation), where we’re at, it was for me just something that I feel good about. That’s like a minor deal for us right now. We’re just going through all this stuff, this film, and seeing where we’re at. We have bigger things to worry about than that. So, that’s where we’re at right now.”

The Bears were 5-4 last season and in the middle of a six-game losing streak heading into a Monday night matchup against the Minnesota Vikings when Nagy decided to give Lazor the play-calling duties. An offense that ranked among the NFL's worst performed somewhat better in the final weeks of the season, with quarterback Mitchell Trubisky returning to the lineup after being benched early in the year.

The Bears made the playoffs despite going 8-8 in the regular season for the second year in a row, then lost their wild-card game at New Orleans in convincing fashion. Chairman George McCaskey opted to stick with Nagy and general manager Ryan Pace, citing their leadership and the way the team handled the big losing streak. But the heat clearly is on them.

The Bears haven't advanced in the playoffs since the 2010 team made it to the NFC championship game. They have a 42-54 regular-season record in Pace's six seasons, including a 28-20 mark in three years under Nagy. And there are big questions about the direction the team is headed.

Chicago signed veteran quarterback Andy Dalton because Trubisky never developed the way they envisioned after drafting him with the No. 2 overall pick in 2017. They also released former All-Pro cornerback Kyle Fuller for salary-cap reasons.

“We knew we were gonna have to make some tough decisions,” Pace said. “And really, guys, you saw this throughout the league, some teams releasing multiple starters. Every team had hard decisions to make. Really a year where projection with the cap is almost (a) 30 million-dollar difference of where we projected it to be. This is the unfortunate part of it. And again, I think as you look throughout the whole NFL, teams were dealing with this. Teams were having to make hard decisions.”

The Bears might also have some things to smooth out with Allen Robinson after placing the franchise tag on their star receiver.

“We tagged him for a reason," Pace said. "He’s a really good player. We’re glad he’s part of our team. We know he’ll be here in 2021. Again, he’s a focal part of our offense. It’s a resource that we have that we use, and we’ll continue to work through it.”

As for the quarterback situation, Pace made it clear: Dalton is the starter. He called him “one of the more complete quarterbacks that we evaluated in free agency.” The Bears are also looking at QBs to draft.

Dalton made three Pro Bowls playing for Cincinnati from 2011 to 2019. He signed with Dallas as a backup after the Bengals released him to clear the way for No. 1 draft pick Joe Burrow.

Dalton wound up playing in 11 games and made nine starts with Dak Prescott suffering a season-ending ankle injury in Week 5. The Cowboys finished 6-10 and missed the playoffs for the second year in a row.

But Dalton is in Chicago not just because the Bears missed on Trubisky. Nick Foles struggled in his first season with them.

“It's not just Nick,” Pace said. “We had other issues with our roster from a personnel standpoint that we improved throughout the season and that we're still striving to improve now. It's just not all on Nick.”

Pace also said Trubisky, who signed with Buffalo to back up Josh Allen, “battled” for the Bears and “sacrificed a lot for this team.”