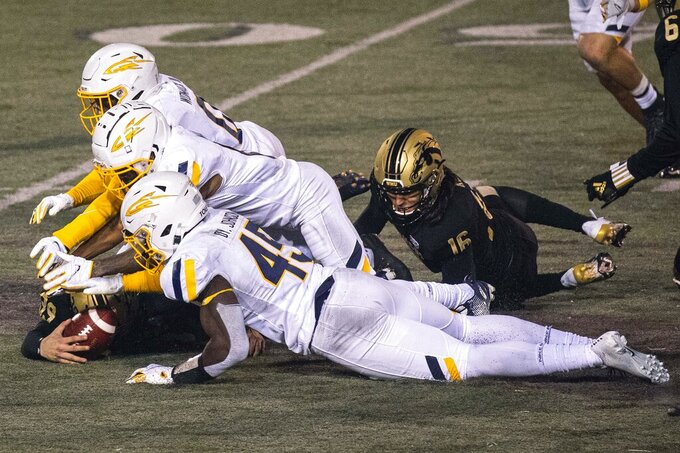 FILE — In this Nov. 11, 2020 file photo, Western Michigan's Nick Mihalic (39) grabs the onside kick against Toledo during the fourth quarter of an NCAA college football game in Kalamazoo, Mich. An NCAA official voiced concern, Thursday, Nov. 12, 2020, over sports betting on the performance of individual student athletes, and suggested that gambling regulators consider restrictions on such wagers to protect the integrity of the games. (Joel Bissell/Kalamazoo Gazette via AP)

ATLANTIC CITY, N.J. (AP) — An NCAA official voiced concern Thursday over sports betting on the performance of individual college athletes, and she suggested that gambling regulators consider restrictions on such wagers to protect the integrity of the games.

This type of bet concerns whether a given player will or won't surpass a certain threshold during a game, like whether a quarterback will throw 3 touchdowns or whether a running back will rush for 100 yards.

“Unlike the professional leagues, we are now talking about student-athletes attending class with people who may be betting on their efforts on the field or the court,” Stevenson-Starks said. “That's a concern. If you can think about missing a field goal or a free throw that might make the difference in a result, that's not the most settling thought.”

The NFL expressed similar concern about prop bets on its own players a few years ago. But NFL player props are a much larger segment of the sports betting industry than those on college players, something Stevenson-Starks acknowledged.

A survey Thursday of leading U.S. sportsbooks found little in the way of college player props, although they were more readily available on unlicensed offshore sites that are beyond the reach of U.S. regulators.

A spokeswoman for DraftKings said its college props usually involve which team scores first or last, and how many points a team will score. The lone game listed on the site for Thursday, the Colorado State-Boise State football game, did not offer bets on any individual player.

FanDuel was offering a bet on whether Colorado State quarterback Patrick O'Brien would throw for more than or fewer than 275.5 yards.

New Jersey is in the process of removing its restrictions on college sports betting to allow bets on New Jersey teams and all games played in the state.

The NCAA's concern over player bets resonated with at least one state gambling regulator participating in Thursday's seminar. Cathy Judd-Stein, chairwoman of the Massachusetts Gaming Commission, said one of the things her state will consider in any future legislation to legalize sports betting is “the safety of amateur athletes to protect them against exploitation.”

Stevenson-Starks also voiced renewed support for federal regulation of sports betting that would replace the current system of state-by-state supervision. A push to enact such a law soon after a U.S. Supreme Court decision in 2018 that cleared the way for all 50 states to offer sports betting has languished in the 2 1/2 years that followed.

A federal law “would be the most desirable. I don't think the momentum is there for that to be resurrected, but it is something that should be on the radar,” she said. “The state-by-state approach is more difficult for an institution like the NCAA.”