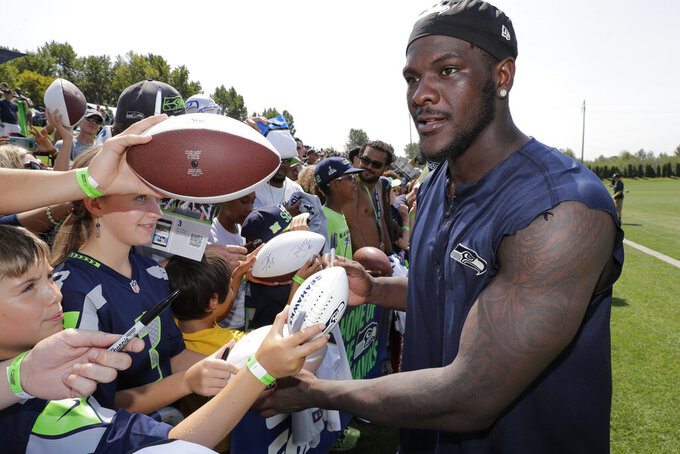 KANSAS CITY, Mo. (AP) — Frank Clark held it together through the questions about his checkered past, what he plans to bring to the Kansas City Chiefs and the massive new contract the star pass rusher signed with his new team.

The tears finally rolled when he talked about its impact on his family.

While other teams were introducing their first-round draft picks Friday, the Chiefs were unveiling their own addition. But rather than a wide-eyed, unproven rookie, Clark happens to be a four-year vet who established himself with the Seattle Seahawks as a dominant and versatile defensive end.

The Chiefs acquired the 25-year-old Clark this week for a first-round pick this year and a second-round selection next year. The teams also swapped third-round picks.

Kansas City finally made its first selection at No. 56 on Friday night, when it sent a fifth-round pick to the Rams to move up five spots and select Georgia speedster Mecole Hardman.

An undersized wide receiver, Hardman ran a 4.33-second 40-yard dash. Throw in his elusiveness and open-field playmaking ability, and it appeared as the Chiefs had drafted a replacement for Tyreek Hill, who is under investigation for his role in a suspected child-abuse case.

The Chiefs then used the 63rd overall pick in the second round to select Juan Thornhill, a versatile defensive back from Virginia. He has the speed and ball skills of a cornerback and the ability to defend the run like a safety, making him a good match for new running mate Tyrann Mathieu.

They wrapped up the second day of the draft by choosing Khalen Saunders out of Western Illinois in the third round, giving the Chiefs a massive run-stuffer in the middle of their defensive line.

Meanwhile, the Chiefs gave Clark a life-changing $105.5 million, five-year deal that includes $63.5 million in guarantees — more money than he could have dreamed of while growing up homeless in the rough, gang-infested neighborhoods of south-central Los Angeles.

"I come from a place, dog, where nothing was given. It was hard. It was very hard," he said, "and to be able to affect my family, I swear, it's the happiest thing in my life, knowing that my family can rely on me. There was a time where I felt they couldn't, that I wasn't the role model I could be for my brothers, my sister. It's awesome. It's a blessed feeling, man."

Clark's arrival comes at an awkward time for the Chiefs, who are reeling from Hill's criminal investigation. The case was reopened Friday after a TV station aired audio that showed Hill and his fiancee, Crystal Espinal, discussing injuries to their child.

Clark has his own off-the-field history. He was kicked off the team at Michigan when he was charged with first-degree domestic violence and assault following an incident with his then-girlfriend. The charges were later reduced to fourth-degree persistent disorderly conduct and Clark completed a domestic violence course and paid court costs and fines.

Clark has been outspoken in support of those harmed by domestic violence. He also has worked closely with the homeless community in Seattle, and said he hopes to continue that work in Kansas City.

"I've had to learn to be a better teammate, a better person and a better man in general," Clark said. "You have to own up to it and what you did. I affected a lot of people during that.

"It's something I have to learn and grow from, and that's why I'm so persistent in bettering myself," he said. "I'm a real person. I don't have nothing to hide. That's just me. Everyone is going to get a chance to know me. I know what they read, I know the perception people can have. The hard part is getting to know someone. Once they do that, they will understand me as a person."

The Chiefs certainly like what they see as a football player.

Clark plays with a relentless motor, not only when it comes to rushing the passer but also against the run. He also has relatively little wear on his body after starting his career as a backup, and that means there's a good chance he is only now beginning to reach his prime.

"This was our plan all along. This was the guy we targeted," Chiefs general manager Brett Veach said. "When we find someone we like, we find a way to get him. We did that with Pat Mahomes. We didn't have a first-round pick last year and it was because we traded up to draft the league MVP."

Veach and Chiefs coach Any Reid both said they were comfortable with Clark given the franchise's questionable history when it comes to players with character concerns.

Along with Hill's legal trouble, the organization endured a grisly murder-suicide involving linebacker Jovan Belcher and his girlfriend in 2012. Last year, they quickly released star running back Kareem Hunt when video surfaced showing him shoving and kicking a woman in an Ohio hotel hallway.