New deal has given Patriots' White boost after hip surgery 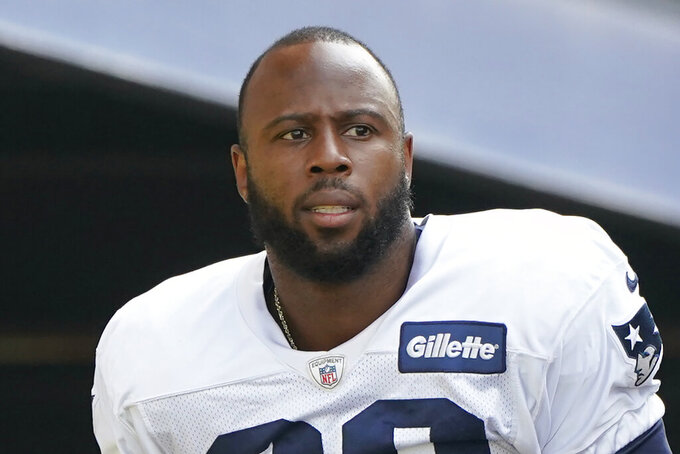 FILE - New England Patriots running back James White steps on the field at the start of an NFL football practice, Wednesday, Aug. 25, 2021, in Foxborough, Mass. It's been slow going since hip surgery that cut his 2021 season short, but the Patriots running back is slowly regaining his pep after signing a new two-year deal to remain in New England. (AP Photo/Steven Senne, File)

FOXBOROUGH, Mass. (AP) — The last time James White left Gillette Stadium in his Patriots jersey, the veteran running back wasn’t sure if he’d ever wear it again.

White had been carted off the field minutes after nearly dislocating his hip in New England’s Week 3 matchup with New Orleans last season.

Surgery soon followed, abruptly ending his eighth NFL campaign and the one-year deal he’d signed that spring to extend his tenure with the team he’d won two Super Bowls with after they drafted him in 2014.

He spent the past seven months with not only his career but his future in New England in limbo as a free agent for the second straight offseason.

“They’ve definitely been challenging. I’ve never been in this position in my football career at all, having to sit out this amount of time and dealing with an injury like this,” White said Monday. “So, it’s a different perspective for me. I think as the months have gone on, I got better and better mentally, building the confidence back and feeling like I have the ability to go out there and compete at a high level.”

He said doubt about his ability to ever play football again crept into his mind “a lot” in the initial months after his surgery in October. He was mostly confined to a bed then, reliant on his wife to help him with basic tasks. His toddler son even helped retrieve his dad’s crutches at times.

“You think to yourself, how can I ever run and move and all that stuff ever again?” White recalled. “But obviously, as the months go on and things started to loosen up, you start kind of moving around and doing some of the normal things you used to do, and then they just build that confidence back over again.”

That process received a jolt forward last week when White came to terms on a two-year, $5 million extension with the Patriots.

It was New England’s latest recommitment for one of the members of its core group of veterans this offseason, following the re-signings of safety Devin McCourty and special teamer Matt Slater.

While the two-year pact isn’t significant in years, the offer alone made White’s decision-making process easy coming off back-to-back seasons beset by misfortune. The hip injury came on the heels of a 2020 campaign in which his production fell off as he dealt with the aftermath of his father’s death and mother’s severe injury in a car accident.

He entered free agency with a completely open mind.

“I was open to anything,” he said. “I didn’t really know my free agency market was going to be like coming off this injury, whether anybody would want to quote, unquote take a chance on me. But Bill (Belichick) had the confidence and wanted me back. So that was kind of important to me. To still be wanted after this is definitely something that helped me out a lot.”

White said he’s been walking for about two months and just recently started to get back to engaging in normal exercises during his rehab. He’s also been told by his doctors that the hip is looking good post-surgery and that he isn’t at risk to re-injure it, which has added to his positive outlook.

While the Patriots got a breakout season from running back Damien Harris (929 rushing yards, 15 touchdowns) and solid year from rookie Rhamondre Stevenson (606 rushing yards, five TDs), neither filled the role White has played as a dependable pass catcher out of the backfield.

The roster also opened up a little more after Brandon Bolden signed with Las Vegas. New England did sign running back-receiver Ty Montgomery on a two-year deal, but he doesn’t have the institutional knowledge of White.

For now, White is just approaching each milestone in his rehab with an eye on getting back on the field. The rest, he says, will take care of itself.

“Each week, each month I’ve been feeling better and better,” he said. “I’m just trying to push myself as much as I can to make sure I feel as best as possible when I whenever I step out there.”