NFL At 100: A look at the biggest scandals in NFL history 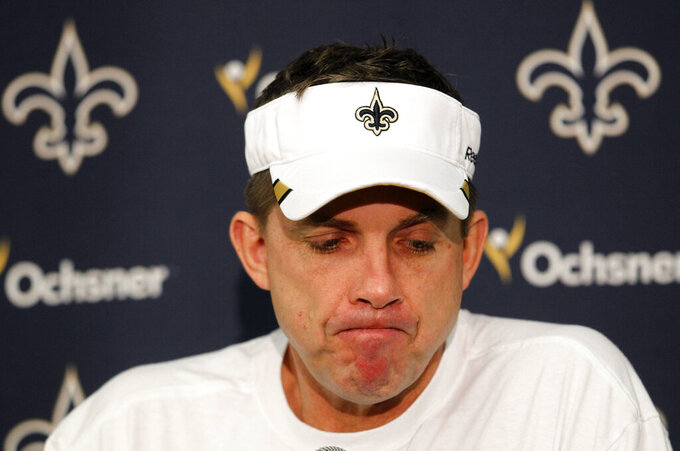 Those are just a few of the NFL's biggest scandals in just the past 15 years. And that's not taking into account all the players suspended for allegations of domestic violence.

The most divisive of all — Colin Kaepernick's protest for social justice — began in 2016 and continues.

But from the gambling suspensions of Paul Hornung and Alex Karras in the 1960s to Patriots players exposing themselves to a female reporter in 1990 to Kaepernick and other players kneeling during the national anthem, the NFL always seems to overcome whatever threatens its image or bottom line.

Football is the most popular sport in America and the league is a financial juggernaut with a current television deal worth $5.66 billion annually through 2022.

"I think some of these scandals definitely do tarnish the league's image, but like with a lot with a lot of things, memories are short and there's a big divide in the public mind between what the athlete does on the field and what the athlete allegedly did off the field," former NFL Commissioner Paul Tagliabue told The Associated Press.

"I think the two categories that for me are the most important are those that threaten the integrity of the game and those that involve owners, because they are supposed to be accountable and responsible for the integrity of the game and for the quality of the product, and that includes the image and the reputation and the credibility and the character of people who are presenting the game."

League executive Troy Vincent has viewed it from many sides during three decades in the game. He played 15 seasons with Miami, Philadelphia, Buffalo and Washington. He was a five-time Pro Bowl cornerback and won the 2002 Walter Payton Man of the Year award. He served as president of the NFL Players Association for four years and has been the league's executive vice president of football operations since 2014.

"Americans are very forgiving people," Vincent told the AP. "The sport of football embodies the values that many Americans embrace themselves. When there is transparency, truth prevails. Football inspires the very things that we would like to see in ourselves as we experience life and pursue happiness and success. It exposes and deals in an intense microcosm with the very challenges and successes we face every day nationwide — on and off the field. In this truth, there is longevity, compelling interest, diversity, and hope."

Richard Crepeau, professor emeritus of History at the University of Central Florida, studied the league for his book: "NFL Football: A History of America's New National Pastime." He concluded that most fans won't abandon the game because of negative issues.

"The Teflon character of the NFL seems a mystery to many, but it probably is the simple fact that people love football, especially NFL football, and in the end they care most about the games on the field, not the action off the field," Crepeau said.

"Most fans get worked up by some scandal or another if it directly affects their team, or if it occurs in the offseason when they're not deeply immersed in the action of the competition. Once the games begin the talk about scandals generally subsides."

He's right, and the numbers — finances and ratings — prove it.

A look at some of the biggest scandals and controversies in NFL history:

In 1963, NFL Commissioner Pete Rozelle suspended Paul Hornung of the Green Bay Packers and Alex Karras of the Detroit Lions indefinitely for betting on NFL games. Five other members of the Lions were fined $2,000 each for betting on the 1962 NFL championship game between Green Bay and the New York Giants. The Lions were fined $2,000 for ignoring reports of gambling by players. Rozelle made it clear there was no evidence any player bet against his own team.

Both players were reinstated a year later. Hornung, a running back and punter, won two more championships with Vince Lombardi's Packers and was elected into the Pro Football Hall of Fame in 1986.

Karras played seven more seasons in the league and the linebacker became an All-Pro for a third time in 1965.

In 1983, Colts quarterback Art Schlichter became the first player since Hornung and Karras to be suspended for gambling.

In September 2007, Commissioner Roger Goodell fined the New England Patriots $250,000 and coach Bill Belichick was fined $500,000 because a team videographer recorded New York Jets defensive coaches from an unauthorized location during a game a week earlier. The Patriots also had to forfeit a first-round pick.

Belichick said he made a mistake interpreting videotaping rules. The cheating suspicions tainted the team's first three Super Bowl titles. But Goodell declared a year later after viewing evidence from New England's former video assistant that there was no new information to issue further discipline.

Patriots quarterback Tom Brady was suspended four games to start the 2016 season over an accusation of cheating in the 2015 AFC championship game against Indianapolis. The dispute over air pressure in footballs stretched across three NFL seasons and turned into a multimillion-dollar legal battle. Brady lost in court as he challenged the suspension. He was supported by team owner Robert Kraft, who basically was confronting his fellow owners. Brady returned to lead the Patriots to their fifth of six Super Bowl titles.

The Saints were also fined $500,000 and had to forfeit their second-round draft picks in 2012 and 2013. Goodell imposed the discipline after a three-year NFL inquiry. However, Tagliabue, who preceded Goodell as commissioner from 1989-2006, overturned all sanctions against the players in December 2012 following a second appeal hearing.

In November 2013, the Miami Dolphins suspended offensive lineman Richie Incognito for the remainder of the season for bullying fellow lineman Jonathan Martin, who had abruptly left the team. An NFL investigation determined Incognito and two other offensive linemen engaged in a pattern of harassment toward Martin.

Neither Incognito nor Martin played for the Dolphins again. Martin retired after playing 15 games for San Francisco the following year. Incognito sat out the 2014 season, signed with Buffalo in 2015 and went to three straight Pro Bowls.

Tagliabue issued fines totaling $72,500 to the Patriots and three players in November 1990 for their role in a sexual-harassment charge by Boston Herald reporter Lisa Olson. Victor Kiam, the team owner at the time, said "he could not disagree with the players' actions," and he thought female reporters were intruding in the locker room. Olson settled her sexual harassment lawsuit against the Patriots, Kiam and several team employees in 1992. Kiam apologized to Olson after a women's group urged a boycott of his Remington company's products.

In 2006, the NFL fined Vikings players Bryant McKinnie and Fred Smoot for their participation in a party boat scandal the previous October. Both pleaded guilty to misdemeanor disorderly conduct and were ordered by the court to pay $1,000 in fines and do community service. Two other players also were charged. Moe Williams was convicted of disorderly conduct, and charges against Daunte Culpepper were dropped.

The embarrassment, with tales of debauchery and indecency from the cruise, prompted Vikings owner Zygi Wilf to issue a 77-page code of conduct to players, coaches and other team personnel.

In 2014, the NFL announced a new policy for domestic violence and other assaults after Goodell was sharply criticized for mishandling a domestic abuse case against Baltimore Ravens running back Ray Rice. Goodell initially suspended Rice for two games after he was charged with third-degree aggravated assault for hitting his then-fiancee in an elevator in Atlantic City, New Jersey. The couple married a month later. After a video emerged in September showing Rice knocking her unconscious and dragging her from the elevator, Goodell then suspended the three-time Pro Bowl player indefinitely and the league implemented its new policy. Rice pleaded not guilty to aggravated assault and applied to a program for first-time offenders. An arbitrator vacated Rice's suspension in November, but he never played again. The league has disciplined several other players for domestic abuse since Rice's case created a firestorm.

The league began testing players for steroid use during the 1987 season and started issuing suspensions two years later. The case of former Broncos and Raiders star Lyle Alzado, who died of brain cancer in 1992, exposed the rampant use of steroids going back to the '60s. Alzado claimed 90 percent of the athletes he knew used the performance-enhancing drugs.

In September 2014, Minnesota Vikings running back Adrian Peterson was placed on paid leave for nine games and suspended for the final six after he was indicted by a grand jury in Texas that found him guilty of disciplining his son with a tree branch. Pederson eventually pleaded no contest to misdemeanor reckless assault. The 2012 NFL MVP returned to the Vikings in 2015 and led the league in rushing.

The 2001 No. 1 overall draft pick was a star during six years with the Atlanta Falcons, but his short stay ended in disgrace. Vick served 18 months in prison following his guilty plea for a dogfighting operation in his native Virginia. Vick got a second chance in the NFL with the Philadelphia Eagles, eventually replaced Donovan McNabb and led the team to an NFC East title in 2010, winning NFL Comeback Player of the Year honors. He earned another big contract, but struggled with injuries and inconsistency the rest of his career.

In 2000, Ravens star linebacker Ray Lewis and a pair of friends were charged for the stabbing deaths of two men outside a nightclub hours after the Super Bowl played in Atlanta. The most serious charges against Lewis were dropped, and he pleaded guilty to misdemeanor obstruction of justice. Lewis helped Baltimore win two Super Bowl titles and was inducted into the Pro Football Hall of Fame in 2018.

In 2012, Chiefs linebacker Jovan Belcher killed his girlfriend before shooting himself at the team's practice facility in front of a team executive. Belcher was later found to have suffered from CTE, the neurological disease caused by brain trauma. The murder-suicide occurred one day before a game that was played as scheduled at Arrowhead Stadium.

In 1999, San Francisco 49ers owner Eddie DeBartolo was fined $1 million and suspended for one year after pleading guilty a year earlier to a charge of failing to report a felony. The case arose from claims that he paid a former Louisiana governor $400,000 in exchange for his help to get a riverboat casino license. DeBartolo avoided a prison sentence by agreeing to testify against the governor. The 49ers won five Super Bowls during DeBartolo's tenure and he was inducted into the Pro Football Hall of Fame in 2016.

In 2018, Carolina Panthers owner and former NFL player Jerry Richardson sold the team after allegations surfaced of sexual and racial misconduct in the workplace. Following a six-month investigation by the league, he was fined $2.7 million.

In 2016, 49ers quarterback Kaepernick kneeled during the national anthem to call attention to police brutality and racial inequality. The protests grew into one of the most polarizing issues in sports, with President Donald Trump urging the league to suspend or fire players who demonstrate during "The Star-Spangled Banner." Kaepernick and former 49ers teammate Eric Reid sued the league for collusion and the sides settled the case this year with a public hearing looming, the threat of owners and league officials facing depositions. Reid signed with Carolina after missing three games last season and got a new contract this year. Kaepernick remains out of the league since the 2017 season.